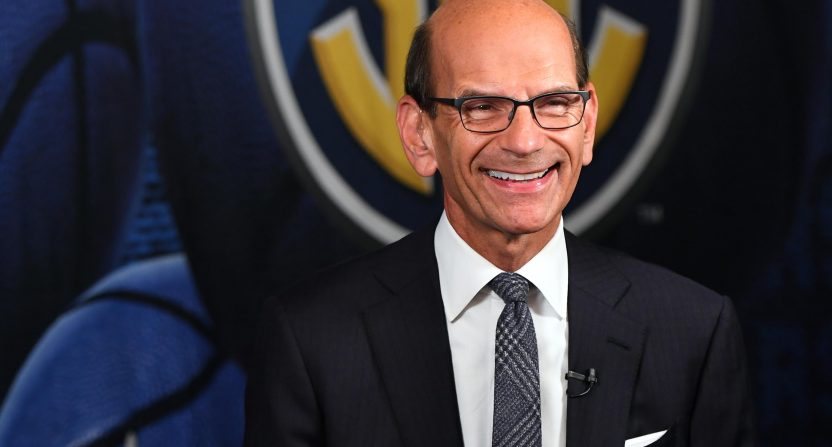 In this week’s edition of “ridiculous sports media rumors”, Fox and Big Ten Network (which is primarily owned and operated by Fox) reportedly have interest in poaching Paul Finebaum from ESPN.

That seems lovely on paper, because Finebaum can fill a role as a both a radio host and a cranky pundit.

But it makes less sense when you remember what has buttered Finebaum’s bread over his career – his affiliation with the SEC.

Fox doesn’t have any SEC TV rights, and BTN is a network focusing on a conference that is not the SEC. Fox also doesn’t have any room on its airwaves during the day for a Finebaum radio simulcast (thanks to Colin Cowherd’s impending contract extension with Fox and the decision to expand the Jason Whitlock hosted Speak For Yourself to two hours), unless you want to pretend they care about FS2 (which history has proven they don’t), and Finebaum’s radio show during the day on BTN would make zero sense whatsoever (unless they want to have him focus on the Big Ten, which would defeat the whole purpose of bringing aboard Paul Effin Finebaum).

Of course, the hedging here is pretty strong. The Sporting News report in question claims that Finebaum and ESPN “are close to agreeing on a new deal,” and the main links to BTN/Fox are the apparent desire of BTN executives for a “Finebaum-like show” to eat up weekday hours in the afternoon (of course, as mentioned earlier, Finebaum’s show on BTN would be a ridiculous fit, since much of his focus is on the SEC) and Fox making splashy ex-ESPN hires in the past.

Not to mention, Finebaum has been antagonistic to several Big Ten schools (most notably Michigan and Jim Harbaugh) in recent years, and that probably wouldn’t fly on a league-owned network.

If I were an executive at ESPN, I would be more worried about Finebaum jumping ship for an exclusive, all-encompassing deal with SiriusXM than I would be about him going to Fox or BTN. Because if Finebaum joins either Fox or BTN and his focus becomes less SEC-centric, the audience that has so loyally stuck with him for years might no longer give him a second thought. Do these executives really think Phyllis from Mulga is going to tune in to hear Finebaum talk about Minnesota’s offensive line?