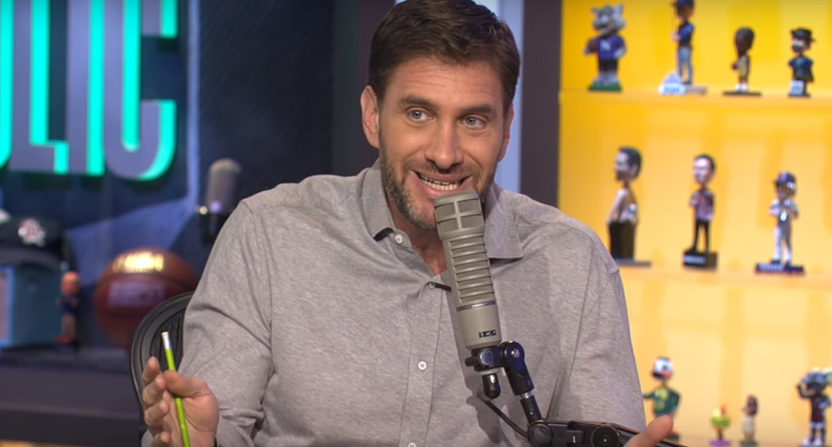 If you’ve been watching Mike Greenberg’s ESPN morning show or listening to his ESPN Radio show in recent months, you probably haven’t seen or heard from Mike Greenberg.

Greenberg’s mounting ESPN absences have caught his audience’s attention on social media in recent weeks, but they also seem to be reaching a boiling point with Pat McAfee.

“Where the f*ck is Greeny?” McAfee asked on his Wednesday afternoon SiriusXM Radio show. “Let’s take a moment right now to go, ‘hey Greeny, where the f*ck are you?’”

“I’m watching Get Up every morning,” McAfee continued. “I watch it because of how efficient it is and that show gets through everything. They have a lot of producers that are looking into sh*t, they have a lot of stuff. But I’m starting to realize, that it’s Greeny who is the person that I’m watching for.

“Hey Greeny, I know you’re in Aspen having a great time, your family has not had a lot of time with you because you did 6am – 10am every single day for 30 years or whatever. But Greeny, it’s about football season. Let’s get your f*cking ass back in the studio.”

Greenberg was on Get Up for three consecutive days last week, which was a very rare sighting. But even more rare than his Get Up appearances are the days that Greenberg hosts his own radio show appropriately titled Greeny, or maybe misappropriate if you factor the amount of absences he’s incurred.

Since June 1, Greenberg has hosted Greeny seven times out of a possible 61 shows. That’s a lot of time off, but I would at least be willing to argue that it’s not unprecedented for sports hosts to use up their vacation time over the summer. Stephen A. Smith took more than two months off from First Take this summer and Michael Kay has been missing in action from the ESPN New York radio show that bears his name.

But Greenberg’s radio absences are even more jarring if we look at the entire year. Since January 1, Greenberg has hosted Greeny just 59 times out of a possible 169 shows and he hasn’t been behind the mic for more than three consecutive days since the week of January 31. That’s a schedule that would make Howard Stern jealous. Actually, maybe not Stern, who vacations longer than anyone, but nearly every other host with a show named after them.

I’m a big proponent of vacations. If you have vacation time, use it and Greenberg has certainly earned and negotiated that right. Greenberg hosts NBA Countdown, Get Up and Greeny, at least some of the time, there’s no doubt that his trio of shows can create for a grueling schedule during the heart of the sports calendar. And at 55 years old, Greenberg doesn’t need to chase after every opportunity to get behind the mic. But once arguably the face of ESPN, Greenberg’s audience is starting to forget what he looks and sounds like.