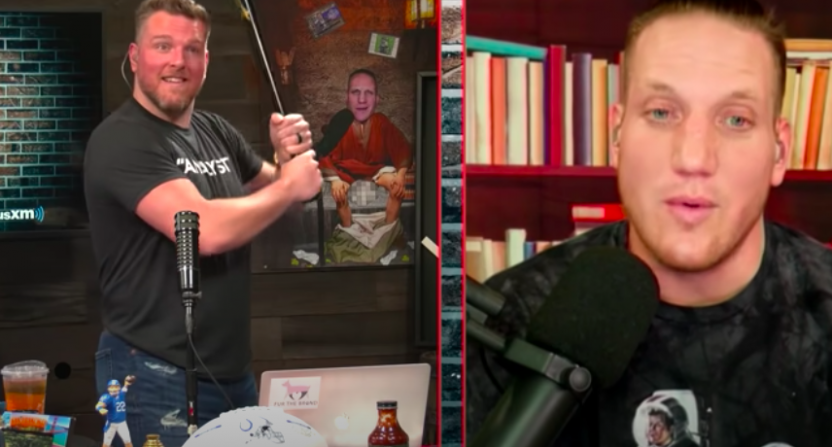 ESPN has certainly been accused of having tactics best described as petty in the past. Most notably was the controversy over the way they would often credit attribution to non-ESPN reporters who break news (or the lack thereof). After years of pushback and public spats, they eventually set new guidelines for crediting breaking news stories. So don’t let it be said that the Worldwide Leader isn’t above self-correction, especially if they get called out on it.

On Friday, Pat McAfee was doing his regular broadcast of “The Pat McAfee Show” on Sirius XM’s Mad Dog Sports Radio when he mentioned that ESPN had a “new mandate” that did not allow ESPN employees to appear on programs with competing media companies. He shared with A.J. Hawk, who was co-hosting at the time, that he received a text and call that some of his go-to guests won’t be allowed to join them moving forward.

“There is no ESPN on the show today AJ….new mandate. We had some good times with some of those (guys). Know ‘em for years. Not allowed anymore, don’t come….I got a text and a follow-up call….It was a good era….What about Greenberg….I guess I would have to just kind of never maybe go on their thing again too….I do believe this particular show was singled out. That’s alright, it was a good run.”

Never one to mince words, it’s understandable that McAfee would take it personally. He had made a multitude of appearances on ESPN programming in recent years, including multiple times as a guest picker and analyst on “College GameDay.” He even belly-flopped into a river on live TV for them.

However, it doesn’t actually seem as though this was anything personal. Rather, radio personalities outside of ESPN, especially those who previously worked for the company, have been feeling the impact of this “mandate” for years. Dan Patrick famously grumbled about ESPN’s refusal to allow their talent on his radio show all the way back in 2010. And that decision seemingly continued with Colin Cowherd when he left for Fox Sports and even impacts Dan LeBatard, who separated from the company just a few months ago.

I miss being able to create content with some of my ESPN friends. I hate that they’re not allowed to join us right now. I’m excited to make content with new friends. But I miss our weird family.

Congrats @PatMcAfeeShow and welcome to the two man club. I take it as a badge of honor. Have since day one. Also congrats on making millions annually on @YouTube and @FanDuel. That freedom outweighs everything else. Keep kicking ass.

The move might seem as though it makes sense from a business standpoint, but it also feels like an edict from a different time. The sports media landscape has shifted so much since ESPN’s halcyon days as (seemingly) the only voice available to talk sports. These days, millions of sports fans are turning to podcasts, satellite radio, YouTube, social media, and so many other types of services for their sports content. To deny yourself the ability to promote your brand and your talent across those channels just seems short-sighted and from a bygone era.

This just seems silly from a pure business standpoint. McAfee and @LeBatardShow don’t need ESPN personalities to do a good show. This is just costing you exposure if you’re ESPN. Such a bummer.

Apparently, someone at ESPN agreed. The Athletic’s Richard Deitsch reached out to them and they’ve apparently decided to change their tune.

From ESPN: “We didn’t intend to ban ESPN guests from the show & there is certainly no ban going forward. We are in the midst of figuring out the best process for future guests to appear on outside platforms & Pat will continue to make regular appearances on ESPN shows.” https://t.co/av41XMZOGH

It’s a bit of a catch-all statement that at least acknowledges the truth that they were indeed blocking ESPN employees, though saying “we didn’t intend to ban ESPN guests from the show” brings up the question of what, exactly, did they intend? It also leaves the door open for ESPN to decide that employees can appear on certain programs and networks, but perhaps not others. It seems unlikely that they would want their talent appearing on FS1, with whom they are in constant ratings and hiring battles. Finally, they’re also smart enough to know they need to maintain a good relationship with McAfee, who is well-positioned to be a prominent voice in the sports media world in the years to come.

Crisis averted? Seems that way, at least for now. Expect to see ESPN talking heads do their talking on other platforms, but don’t be too surprised if this newly mandated mandate doesn’t apply to everyone.