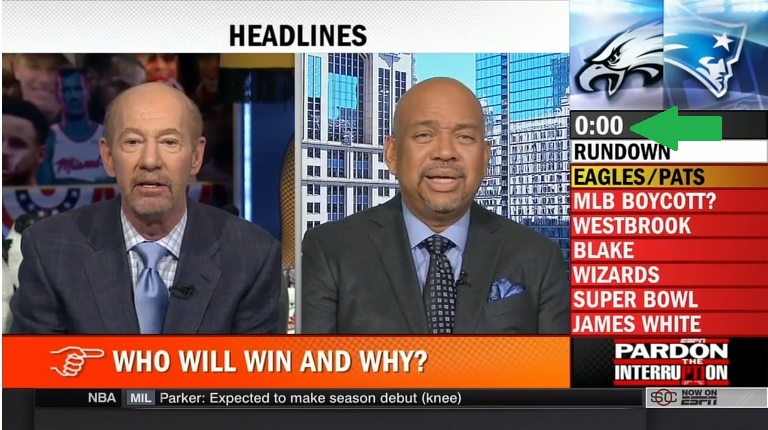 We need to discuss a glaring rules violation taking place five days a week on Pardon the Interruption (PTI). You know the show: Tony Kornheiser and Michael Wilbon discuss the day’s most interesting sports topics. With a few exceptions, they are allotted 90 seconds per topic and then a timer sounds, indicating that they need to move on to the next segment.

Except. That. Never. Actually. Happens. They don’t move on. They talk until they are finished, rules be damned!

I’ve tuned in to PTI several times a month for years and every time Kornheiser and Wilbon completely ignored the countdown clock, I lost a little bit more of my cool. On Friday, I snapped. I cannot stand idly by any longer witnessing this travesty. I mean, they’re not just finishing their sentence or thought, they continue debating back and forth long after the clock has flashed triple zeroes. They need a damn referee.

Let’s take Friday’s episode as one example. They started with some friendly banter about the upcoming Super Bowl. This shouldn’t be too hard to keep under 90 seconds, right?

Yes, it was far too difficult. I’m less bothered by them going over by 20 seconds than I am about them changing speakers a dozen times.

Let’s move on to their discussion of a potential MLB Spring Training boycott:

Oops, overshot the landing by 20 seconds again. After a few seconds, Kornheiser raises his hand in a way that made me think he was trying to move on, but he actually just wanted his chance to speak.

Next, they discuss whether Russell Westbrook deserves any repercussions for shoving the fan who inappropriately ran onto the court and verbally assaulted him:

Still 17 seconds over, but at least they got the answer right (Russ deserves no punishment and the fan should probably be kicked in the nads).

Next, they talk about Blake Griffin’s surprise trade to the Detroit Pistons and his performance… for 23 more seconds than they were supposed to:

Finally, they round out their basketball topics by talking about the Wizards:

Yeah, 20 seconds over. Bells haven’t been more disrespected since Le’Veon’s offseason contract negotiations with the Steelers.

So maybe, it just can’t be done? Well, Peter King manages to end his segment on time. He takes around five seconds to wrap up his thought and then moves on:

In their defense, Kornheiser and Wilbon manage to finish their final segment, The Rundown, on time. However, they are both reading from a teleprompter for this portion, so it doesn’t really count.

Sadly, the best part isn’t included in this clip. At the very end, Kornheiser says something along the lines of, “OK, we’re out of time.” LIKE THAT EVEN MATTERS TO YOU, TONY.

I’m not saying that PTI is a bad show. The content is fine, and Kornheiser and Wilbon are experts. Maybe you think I’m splitting hairs, but my issue is that if the premise of the show is discussing sports topics in 90 seconds, you should actually do that. Maybe 23 seconds isn’t a big deal, but if a ref just decided to add 23 seconds to the end of a football game, there would be riots.

My point is, if a 90-second timer isn’t working, and it’s clearly not, either get rid of it entirely or extend the time limit to two minutes.