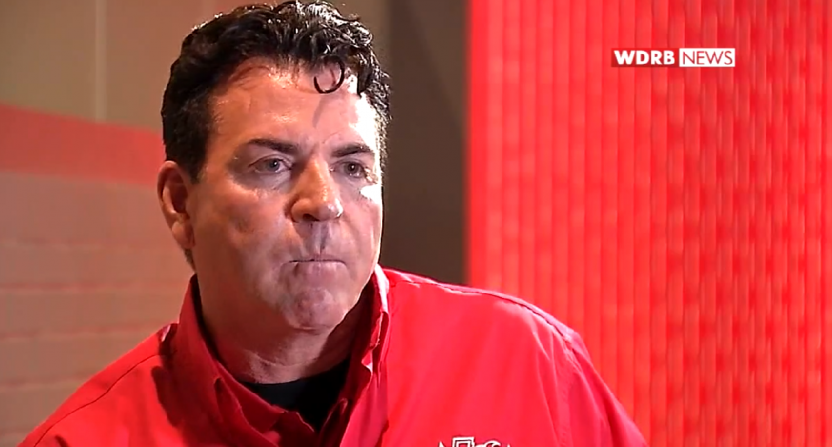 Disgraced pizza mogul John Schnatter gave an interview to Louisville Fox affiliate WDRB in which he offered up a series of quotes, any of which on their own would have been enough to go viral. That he delivered them all together in a sweaty, ranting local television interview is incredibly on brand.

Papa John, clearly still in denial as to why he had to give up involvement in his fast food pizza empire just because he used the n-word on a conference call about avoiding public relations issues, offered up a variety of revelations, perhaps none more disturbing than his claim to have eaten 40 pizzas over the last 30 days. The entire thing is tremendous, in its own disturbing way. Timothy Burke gave us a supercut version, if you want the highlights; if you only watch this version, just know that none of what he’s saying makes more sense in context.

Via WDRB, here’s the quote where Papa John says former ESPN executive Mark Shapiro, who was on the board of directors, should be in jail over his role in Papa’s removal:

“Steve Ritchie, Olivia Kirtley, the board of directors all used the black community and race as a way to steal the company,” Schnatter said. “They stole the company, and now they’ve destroyed the company.”

Ritchie was Schnatter’s handpicked replacement, but after years of friendship, the two are now estranged. Kirtley is a Papa John’s board member.

“Olivia Kirtley and Mark Shapiro should be in jail. It’s that bad,” Schnatter said. “What they’ve done is just wrong, and they’ve hurt a lot of people.”

Ritchie resigned as CEO earlier this year, but Schnatter is still critical of his former protégé’s leadership.

Schnatter has gone after Shapiro before as well, referring to him and the rest of the board of being “sex creeps” last year in a story that also involved Rick Pitino, because of course it did:

Specifically, Schnatter accuses Shapiro of a repeatedly expressed desire “to f–k” a female Papa John’s board member. The letter says that Shapiro would “travel a day early to a board meeting to accomplish this.”

This new interview is a portrait of someone in denial, as Schnatter is totally discounting the massive hit his company took when his behavior was revealed. Instead, he seems to think it was his removal that was the catalyst for the downfall, and if he’d just been allowed to remain in place everything would be back to the way it was. Even the 40 pizzas remark comes as he’s critiquing the current quality of the product:

After years of touting “Better Ingredients, Better Pizza,” Schnatter said it’s ultimately the customers who are left with the broken pieces.

“The way they’re making the pizza is just not fundamental to what makes a Papa John’s pizza.”

Apparently things appear a bit different when you’re not looking at things through lenses smeared with garlic butter.