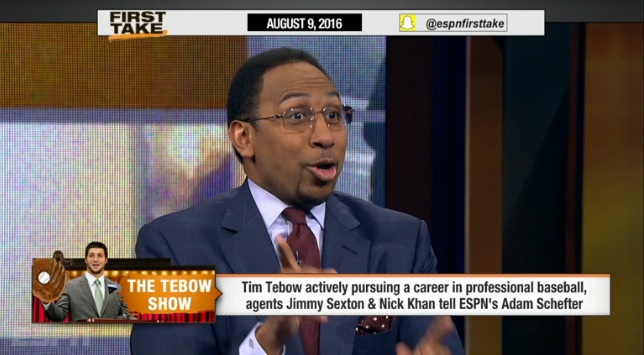 Those who like to pick on ESPN’s First Take and FS1’s Undisputed had a harder time doing that with Monday’s ratings. The combination of a holiday (Martin Luther King Jr. Day) and hot takes on the Dallas Cowboys’ loss led to remarkable ratings for both shows:

According to The Wrap, the 283,000 for Undisputed broke its previous record (196,000 on January 2), and it also marked the second time that Undisputed beat SportsCenter on ESPN2. As before, that’s not necessarily much to brag about considering the ratings First Take posted on ESPN, but it does buttress Fox president (national networks) Jamie Horowitz’s claim from last April that opinion is more relevant with viewers than news.

Those particular First Take ratings also mark a substantial improvement for ESPN over what SportsCenter was pulling before the First Take-SportsCenter channel swap earlier this month. They make a case for ESPN putting First Take there beyond just winning the debate war with Fox. If First Take can regularly pull over 800,000 viewers, that move could be a total audience win for ESPN, rather than the total audience loss it looked like at first.

However, this is just one data point, and one with a couple of very obvious caveats. Because of the holiday, some people may have been at home to tune into these shows who never would have otherwise; their jobs may prevent them from returning regularly. Beyond that, this was the day after a couple of big NFL playoff games, and ones that offered plenty of opportunities for takes.

In particular, the Cowboys’ loss may have spurred traction for the debate shows, as both Undisputed‘s Skip Bayless (generally pro-Dallas) and First Take‘s Stephen A. Smith (generally against Dallas) are known for hot takes on that team. People may have tuned in just to see their takes on that game. If that was the case, that’s not something that’s really replicable day-in and day-out.

Still, Monday was certainly a good day for the debate shows and for their proponents. First Take was the big winner, pulling in a remarkable audience and one triple the size of what Undisputed landed. Fox’s show recorded a personal best, though, and it again managed to beat ESPN2 (which is really what they seem to be going for these days), so they have plenty to be happy with as well.

Perhaps even more importantly, both shows demonstrated that they have a substantial audience ceiling. They both drew major crowds, and while circumstances may have helped, that will give both ESPN and Fox ammunition the next time they face criticism for their promotion of debate. While this was just one day, the argument that these networks are simply giving viewers what they want looks a lot stronger after days like these.