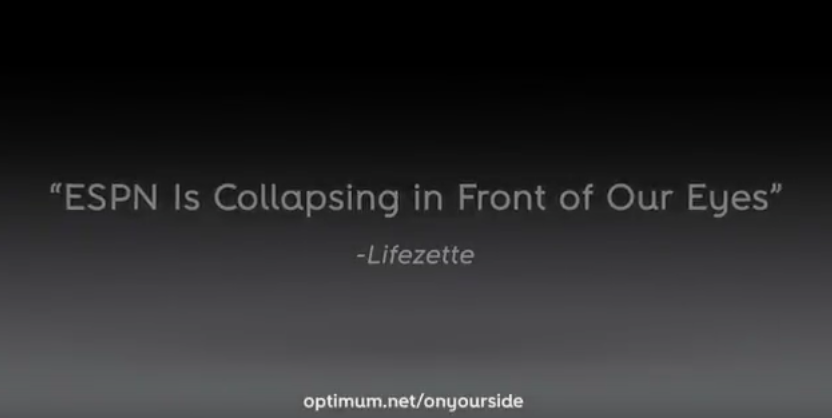 ESPN and Disney are involved in an increasingly ugly cable dispute with distributor Altice, and time is running out before the Sept. 30 deadline to get a deal done.

Customers largely in the northeast would be affected if the distributor were to drop ESPN, leading one to wonder whether or not it was just a coincidence that ESPN’s College GameDay originated from the heart of New York City last weekend and not the traditional college campus. A factor in the dispute is ESPN’s litany of college-based channels and the lack of widespread college football fandom throughout the northeast.

It’s no secret that ESPN has been swimming upstream with the market in relation to cord cutting and rising costs leading to a downturn in subscribers. And unfortunately for Bristol, Altice and its cable brand Optimum are using those negative headlines against ESPN.

In this 30-second spot, the distributor runs a plain ad that features nothing but negative headlines about ESPN business as of late. The message at the end tells customers that they will only pay a fair price for networks which are then passed on to consumers. It’s a brutally harsh ad that is not going to make coming to an agreement any easier.

Don’t worry, ESPN has thrown their share of barbs in this fight too. Here’s a Disney corporate statement hitting back, via USA Today:

Disney had its own harsh words for Altice. “The typical Optimum customer pays $160 or more each month for service to Altice, and the bulk of that money goes into their pocket,” the company said in a statement. “For broadcast basic, Altice charges its customers $34, which is more than 15x the amount we are seeking for the market’s most watched station, WABC.”

In the past, ESPN has usually been able to get deals done with distributors because it’s one of the most popular cable channels available. The pure demand has traditionally outweighed any other factor. Even if you aren’t a huge fan of college football, you’d still miss Monday Night Football, college basketball, the NBA, and pretty much everything else in the sports world without ESPN. Bristol has always, always, always had the ultimate leverage here. A cable lineup without ESPN isn’t really much of a cable lineup at all.

But now? Now things just might be different. The industry trends are working against traditional cable and if customers are dropping their subscriptions in part because of the rising fees of channels like ESPN, then suddenly the cable companies have a lot more leverage than they used to. It’s why cheaper non-sports bundles are gradually becoming an option for consumers.

The impact of what happens in this dispute goes beyond the northeast as well. In fact, one could argue that this deal is even more important for the deals ESPN will make in the future with other major distributors. ESPN will want to try to play hardball because giving in now could set a trend moving forward with other companies and tell them that they aren’t in as strong of a position as they once were.