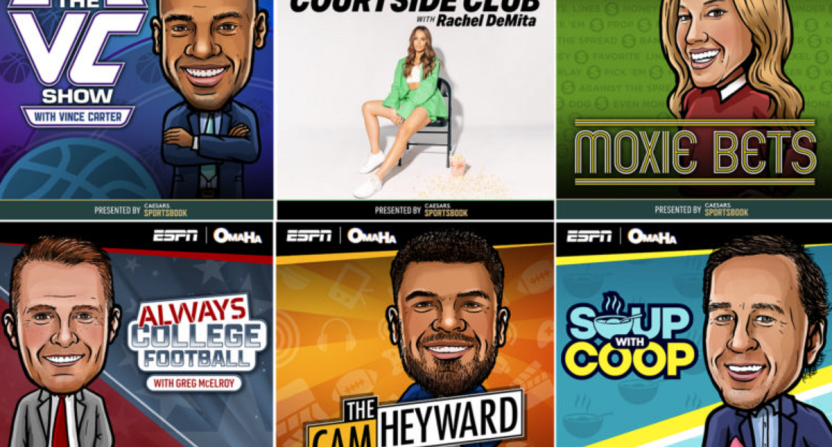 ESPN clearly values its relationship with Peyton Manning’s Omaha Productions, having already expanded it to include new programming upon the success of the ManningCast.

Now ESPN announced a new element of their deal, moving into the world of audio for a lineup of co-branded podcasts headlined by Vince Carter and others. ESPN announced the news in a press release:

“This new project with Omaha Productions will allow us to offer an even more in-depth experience for fans across our ever-expanding podcast library,” said Jimmy Pitaro, Chairman, ESPN and Sports Content. “We are thrilled to extend this already successful partnership into the audio space with the launch of these first six titles led by so many engaging personalities, with much more to follow.”

“One of the best parts of the Monday Night Football show is getting to talk about a sport I love with other folks who share the same passion for the game,” said Omaha Productions Founder Peyton Manning. “With this audio network, we want to deliver those same entertaining and informative conversations from a great crew of folks at Omaha Audio, who are not only informed but genuinely love the sports and topics they cover.”

The audio venture will launch this summer, with six titles rolling out over the next few months:

Each week on The VC Show, 8-time NBA All-Star Vince Carter and co-host Ros Gold-Onwude talk all things basketball with some of the biggest names in sports and entertainment. They will give their unfiltered thoughts on the NBA and Vince will share stories from his illustrious 22-year career.

Grab your popcorn and sit “Courtside” with host and influencer Rachel DeMita as she chats with the biggest athletes, celebrities, influencers, and creative minds. Rachel and her guests dive into sports, pop culture, and the experiences that made them who they are today.

Make bets with moxie with betting expert Katie Mox and her merry band of gambling insiders as they preview lines, spreads, parlays, and props with personality and the kind of advice they would give themselves.

ESPN college football analyst Greg McElroy takes a deep dive into the sport with the biggest names on and off the field. With off-seasons being a thing of the past, McElroy goes year-round with analysis, opinions and insight on top teams and under-the-radar stories from coast to coast.

Each week, The Cam Heyward Show gives fans a peek behind the curtain of NFL life. Pittsburgh Steelers defensive tackle and five-time Pro Bowler Cam Heyward gives his unfiltered thoughts on the league and headlines across all sports, welcoming in top guests including athletes, coaches and celebrities to talk sports, pop culture and more.

Cooper Manning invites players and coaches from across sports to share stories and laughs while enjoying a bowl of his guest’s favorite soup. When the soup is finished, the conversation ends.

First glance: listening to Vince Carter break down the NBA sounds more appealing than listening to Cooper Manning slurp down a bowl of chowder, but to each their own.

Audio is a natural expansion for Omaha, given the revenue possibilities. Partnering with ESPN as their publisher also makes a lot of sense, and from ESPN’s side, it gives them even more security with an external company they clearly value. (And would very much like to prevent, say, Amazon from poaching at some point in the future.)