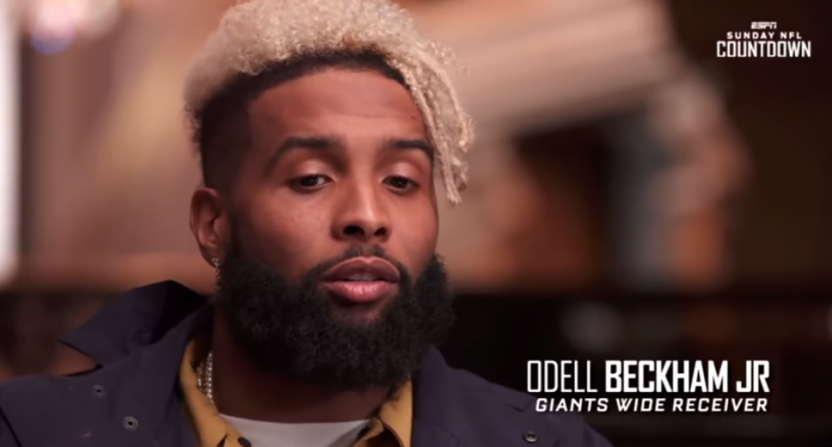 ESPN’s Sunday NFL Countdown made more news than usual this week thanks to a hyped-in-advance Josina Anderson interview with Odell Beckham Jr. (and for some reason, Lil Wayne, funny considering that he provided the theme song for FS1’s Undisputed). That interview saw Beckham criticize quarterback Eli Manning’s lack of deep passes, as well as the team’s overall energy and heart. Those are unusually candid comments for a NFL player to make in the middle of a season, especially in an interview conducted mid-week and arranged in advance rather than an emotional post-game interview. And now it turns out that, as per Pro Football Talk’s Mike Florio, that the interview was arranged without the Giants:

Per a league source, ESPN set up the interview directly with Beckham, without going through the Giants. The interview happened in New York City on Tuesday, Beckham’s day off.

The Giants became aware that the interview was happening on Monday. They had no involvement in it of any kind.

Wow, can’t wait!! Bet there’s some good stuff for the hot-take, cold-take world in there!! https://t.co/hi3wLBzjyZ

A key seven-minute clip of the interview can be seen here:

Is this really a big deal? Not necessarily. As Florio notes, plenty of interviews are arranged through players’ management rather than through their team, especially on off days. But this one was higher-profile than many, with more controversial remarks about teammates than many, so it got a lot of attention, and ESPN’s hyping of it both before and after the interview boosted that further. And if the Giants’ organization, or Shurmur, or individual players like Manning, are upset about that they might be a little more reluctant to talk to ESPN. And the timing there might be particularly interesting, given that ESPN’s Monday Night Football has the Giants-Falcons game on Oct. 22 and the Giants-49ers game on Nov. 12. If anyone there is reluctant to talk to ESPN, they’ll soon have their chance.

However, it’s not yet clear that anyone’s actually mad at ESPN over this. Beckham said after the Giants’ game Sunday (a 33-31 loss to the Carolina Panthers thanks to a last-second 67-yard field goal from Graham Gano, but one with some improvement, including a touchdown pass thrown by Beckham himself) that he had no regrets about the interview, that he talked with Manning, coach Pat Shurmur and the team overall about his comments this weekend, and that he thought it all worked out:

“I don’t regret anything that I said. If it took that for us to come together as a team like we did [Sunday]. I can take that every single time.”

“It’s been on my heart. And I think all the stuff that was built up inside, it just kinda — it came out in the wrong way. And I texted [Shurmur], and I asked if I could have a minute to just talk to the team, because I feel like if we’re not all on the same page … if it’s not authentic and real, and we can all understand each other, then there’s always gonna be miscommunication,” Beckham said after Sunday’s loss. “So to be able to do that was big for me. I was nervous to get up there and — these are your brothers you see every day; but once you’re up there in front of all of ’em, it’s a little nerve-racking. So I’m just excited about the way we pulled together. Like I said, we came up short; but we fought [Sunday].”

Others may feel differently, and maybe this will yet lead to a controversy. And sure, it’s a bit of a bold move for ESPN to arrange a potentially-controversial interview like this directly, especially as they have the Giants soon and as they’re generally trying to stay on good terms with the NFL. But hey, they also need something to get people to pay attention to Sunday NFL Countdown, and this did help there. And it’s hard to say that Beckham shouldn’t be able to talk to whatever media he wants to on his day off. It will be interesting to keep an eye on this and see if there are any further developments, though. And if the Giants do decide to push back a little, this could be remembered as a costly interview for ESPN.