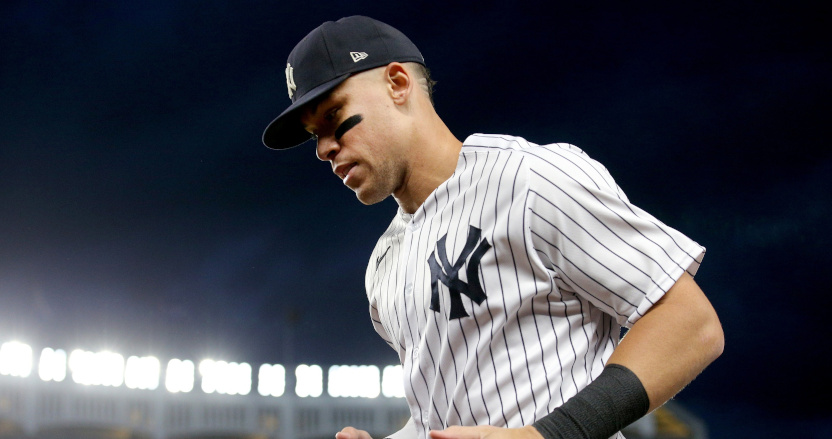 The idea of networks that broadcast sports influencing what happens in those sports has long provoked a lot of debate, discussion, and denials. That’s often seen in conference realignment talk, but it’s more unusual still to see it with a decision about whether to call a game due to weather or not. But according to NJ.com/Newark Star-Ledger Yankees’ reporter Brendan Kuty, ESPN officials “leaned on” MLB to extend a rain delay in this week’s Sunday Night Baseball Yankees-Red Sox game, with the idea of presenting another chance for Aaron Judge (who would have been the next batter if play resumed) to hit his 61st home run:

Sources: ESPN leaned on MLB to keep last night's ridiculous rain delay going, wanting one more chance to air Aaron Judge going for 61 HR. But when Boone made it known they wanted to keep players safe and were very open to subbing out Judge, execs relented: https://t.co/uiLUVbTS4G

ESPN pressured MLB officials to wait out an already long and particularly nasty rain delay between the Yankees and Red Sox at Yankee Stadium because the network was desperate to air Judge getting at least one more at-bat in his chase of 61 home runs, a person with knowledge of the situation told NJ Advance Media. The person spoke on the condition of anonymity because he wasn’t authorized to speak publicly.

Throughout the delay, the Yankees and the Red Sox each lobbied the league to declare the game over as the forecast kept getting worse, the person said. But ESPN kept the pressure on.

There’s no specified amount of time for a rain delay. And the one-hour, 38-minute delay here was actually quite modest by MLB standards. The MLB record is a seven-hour, 38-minute rain postponement for a Rangers–White Sox game in 1990, which had a lot to do with the teams differing on how to make up the game.

But the delay here was notable considering that both teams were playing in different cities Monday, with the Yankees heading to Toronto to face the Blue Jays and the Red Sox returning home to host the Baltimore Orioles. Kuty writes that delays on getaway days like that are usually capped at 90 minutes, but this one was not. And as per his source, this only ended after Yankees’ manager Aaron Boone threatened to pull Judge (seen above jogging back to the dugout ahead of a Sept. 22 game) if the game did resume:

And when that particular possibility — the threat of sitting Judge — reached league and ESPN executives, they moved quickly to end the delay at 1 hour, 38 minutes and the Yankees were declared 2-0 winners, the person said.

However, Kuty’s account here took some criticism from another reporter, ESPN’s Buster Olney (who, in addition to his regular reporting for ESPN’s news shows and digital platforms, is also part of the Sunday Night Baseball broadcasts):

Nope — it's my word against those of his source. Who might be looking to blame someone for the long (and fruitless) delay.

Olney’s last tweet there is absolutely correct; this comes down to Olney’s word against Kuty’s source. And neither of those is more obviously right. Olney’s strong on-the-record denial certainly suggests he wasn’t aware of any ESPN “pressure,” but he wouldn’t necessarily be. Anything of this kind would seemingly be more likely to come from executives than the broadcast crew, and from those executives reaching out to MLB’s own executives rather than team officials. It’s quite conceivable that could happen without Olney being aware of it.

But, on the other hand, Kuty’s report cites a single anonymous source “with knowledge of the situation.” And that source is presenting the situation as they saw it. That comes with questions about how the source knew this: were they on the ESPN-MLB conversations themselves and heard this “pressure” directly, or were they just told about those conversations by someone else? And the source themselves isn’t quoted directly, so readers are getting this at several layers of remove; the published piece is Kuty summarizing what the source told him, which may or may not be its own summary of what the source was told. The source also has plenty of potential bias of their own, which we can’t really evaluate without more information on them. None of that invalidates Kuty’s report, which could be completely correct. But those are all factors to  consider around the strength of a report when it gets challenged, as this one was by Olney.

This is a complicated situation overall. It’s challenging to make rain delay or postponement decisions for even games that aren’t particularly important, and this was an important one. It wasn’t too crucial in the standings, as the Red Sox are missing the playoffs and the Yankees look set to win the AL East and finish second in the AL (although neither is mathematically locked yet), but it certainly mattered for Judge’s pursuit of 61 home runs. And regardless of if ESPN executives did actually apply “pressure” here or not, it seems like it would have been beneficial for that network to get at least one more Judge at-bat Sunday (especially with his next three games across MLB Network and TBS). It wouldn’t have been a huge win for immediate ratings considering how late any resumption would have happened, but it does seem likely that resumption would have been ESPN’s preferred outcome, regardless of if they pressured MLB for that or not.

And calling this game did somewhat hurt that pursuit for Judge. Because this was past the fifth inning, it was a regulation game, and won’t be made up. So Judge lost at least one and possibly two potential at-bats from the game being called. But there are also player health factors to consider, from potential injuries from playing on a wet field to the challenges of having to play on little rest the next day after a long game. So there are absolutely reasons to argue for calling the game, and Kuty’s report indicates that both teams involved wanted that to happen before it actually did. The role ESPN played or didn’t play in how long it took to make that decision remains up for debate, though. And this is just another part in the strange media saga around Judge’s chase.