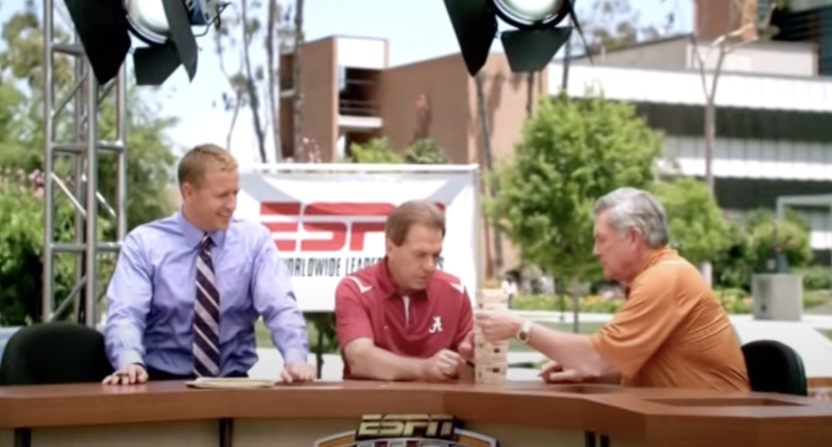 While the BCS National Championship Game in January 2014 featured the Auburn Tigers and Florida State Seminoles, Alabama Crimson Tide head coach Nick Saban was on hand as an analyst for ESPN’s coverage.

According to a new book about Saban, that almost could have been a full-time gig.

AL.com senior sports editor John Talty has begun promotion of his upcoming book, “The Leadership Secrets of Nick Saban: How Alabama’s Coach Became the Greatest Ever.” And while not all of his favorite anecdotes about Saban made it in, he does include the time that the seven-time national champion strongly considered jumping to ESPN.

According to Talty (via the New York Post), Saban reached out to now-WWE President Nick Khan, then a CAA sports media talent agent, following the 2013 regular season. Having just dealt with the “Kick Six” loss to Auburn, the head coach reportedly “empowered Khan to reach out to ESPN with the message Saban was thinking about the next chapter in his career and considering whether media should be a part of that.”

Khan, who also represented Kirk Herbstreit, Skip Bayless, Colin Cowherd, and others at the time, apparently set up a meeting in Pasadena between Saban, his coaching agent, and current Syracuse AD John Wildhack, who was then the executive vice president for programming and production at ESPN.

Presumably, this meeting took place when Saban was in town to work the BCS title game. According to Talty, the Alabama head coach “zeroed in” on the possibility of joining ESPN’s College GameDay crew.

Obviously, nothing came of the discussions. But, according to Wildhack, it wasn’t for a lack of interest.

It’s also worth noting that Saban signed a long-term deal in December 2013 to remain the head coach at Alabama while rumors of a move to Texas swirled. So who knows how all of this timing worked out, and just how close to happening it ever actually was.

That said, it certainly seemed like Herbstreit knew something when he said in August 2014 that Saban was destined to end up on an ESPN set if and when he leaves Alabama.

“Nick Saban will be on the set with us before he’s a coach in the NFL,” said Herbstreit. “I really believe that after he’s done at Alabama, whenever that time is, whether it’s a year, five years, whatever it is, I really believe there’s an itch there about becoming an analyst.”

It’s a great “what-if” for the college football world considering all Saban has done since is lead the Tide to six more SEC Championships, three more national titles, and cement his program as one of the best in the history of the sport.

As for whether or not he’d make that move in the coming years, we’ll have to see how much “rat poison” the 70-year-old is willing to spew at this point in his life.