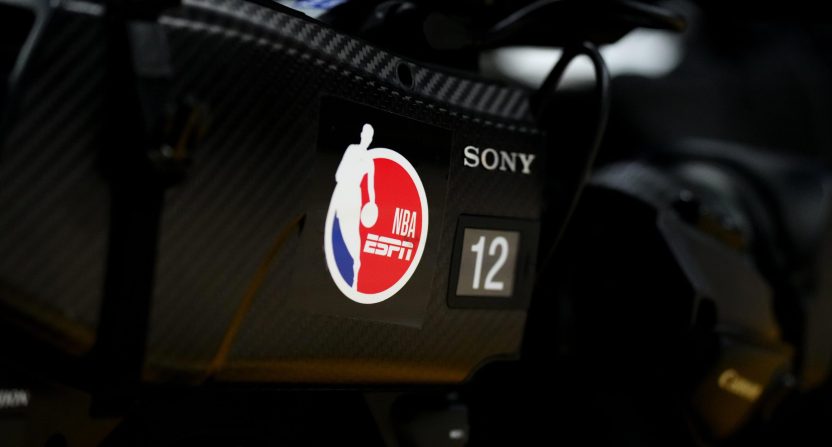 Wednesday’s appearance by WWE CEO Nick Khan on Bill Simmons’ podcast certainly generated a lot of buzz in the professional wrestling world as Khan dished on the Vince McMahon situation, the exit of former co-CEO Stephanie McMahon, the WWE’s potential sale, and other rumors and reports surrounding the sports entertainment company.

One lesser aspect of the conversation that might have been missed was a discussion around the impending NBA media rights negotiations. Before he joined WWE, Khan was a big name in the world of sports media, having launched the sports media department at ICM and heading the television department at CAA, where he negotiated media deals for some of the biggest names in the industry.

So when Khan, who has been known to predict some important sports media deals, said that he sees ESPN coming out as a winner after the NBA’s current media contract expires following 2024-25, it’s worth noting.

When their discussion drifted into the world of the NBA (as things are wont to do with Bill), Simmons said that he believes that while TNT will remain in the mix for NBA rights (in spite of Discovery president and CEO David Zaslav’s potential threats), ESPN is going to up its stake immensely.

“I think TNT will have something because Adam Silver is such a loyal guy and the whole history with them,” said Simmons. “But I don’t think they will have the playoff games in the same way. I don’t think it will be East on ESPN and the West on TNT for the playoffs, I think those days are over. I could actually see ESPN taking a bigger piece and maybe they get 80 percent of it instead of maybe 50 percent.”

Khan agreed with that sentiment but added that he thinks ESPN will want to lock down NBA All-Star Weekend as part of their negotiations in order to have a cornerstone event for partners.

“I think about it this way, the first ESPN Super Bowl I don’t believe is until 2027, so the destination of “Hey, well in advance we are going to be in this city in terms of hospitality,” for your corporate partners, it doesn’t exist for NFL playoffs as you know, because you don’t know where you are going to be until the week before. It doesn’t exist for the NBA Finals until the conference championships are resolved. So they can’t really do it for the Finals. They had the X-Games for years. Obviously, it’s a marginal event, I’m not comparing it to the All-Star game, but it was a big hospitality thing for them.

“So I look at it as All-Star Weekend is probably something they really, really want. That they are going to go after. And are they going to try to get more playoff games? Of course.”

Khan later added that he thinks ESPN might want to go all-in on the NBA in order to make up for what they’re going to lose with the Big Ten and other deals that are ending soon.

“I think even if you look at Fox with what they are doing with their network, there was a college hoops game on Saturday night, on Fox Network. It’s effective. If you look at ESPN now with parting ways with the Big Ten, keep in mind also the other item, whatever the hours or the tonnage that ESPN owes to the MVPDs (Multichannel Video Programming Distributors), the distributors, for live content per year, now the Big Ten stuff, primarily college hoops…the football games are gone, college hoops, there are a lot of games. That is going to go away.

“The beneficiary of that? NBA…because having more games fills that gap. I also think the Big 12 got their deal done in short order because certainly Disney did not want to lose that tonnage. I think the PAC-12 can be a beneficiary of it, even in its weakened state.”

The NBA is reportedly looking to triple their national rights fees (from a current $2.6 billion a year between ESPN and WBD), and that is certainly not out of the question, especially if ESPN is motivated enough to want more games, more playoffs coverage, and All-Star Weekend. It’s also been assumed that Bob Iger’s recent return to Disney is good news for ESPN’s NBA interest, something he was previously very supportive of. Of course, streamers like Amazon are beginning to make themselves known in this space as well and could make a dent in the overall coverage as well.