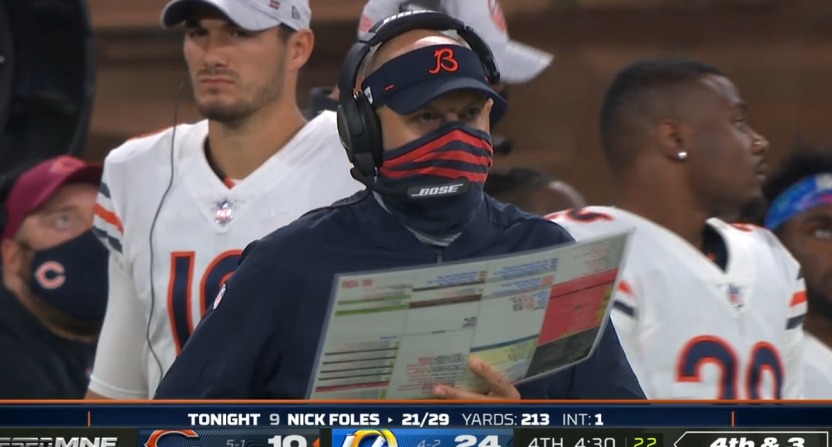 The bigger story for Chicago, though, might be what Brian Griese revealed late in the fourth quarter, when he brought up something Nick Foles apparently told the broadcast crew in a pre-production meeting over the weekend.

According to Griese, Foles said he knows some play calls from Nagy just aren’t going to work as soon as they come in due to a lack of protection. Here’s the moment in question:

Brian Griese on Nick Foles telling him Nagy sends in play call and Foles already knows the play won’t work because he won’t have enough time after snap. pic.twitter.com/NRo7rntR8F

“We were talking to Nick Foles yesterday. and he said sometimes play calls come in, and I know I don’t have time to execute that play call.”

Considering the game felt pretty over at that point (Foles threw an interception later on that drive, effectively sealing it for Los Angeles), Griese’s revelation caught the attention of a lot of the audience. The Bears offense has been, well, pretty bad this year, ranking near the bottom of the league in just about every single meaningful category. Things haven’t exactly improved since Nagy made the switch from Mitch Trubisky to Foles, either, and though it’s hard to complain about a 5-2 start, things certainly have to improve on that side of the ball if the Bears want to think about a playoff run.

Something that’s not likely to help things improve: these comments being made public. After the game, Foles said it was a miscommunication:

“That was definitely miscommunication between Brian and I," #Bears QB Nick Foles said right now over Zoom. https://t.co/DUjRFuBbkc

Whether or not he meant his point was misstated by Griese or whether he meant that Griese wasn’t supposed to make that public, though, is the tough part to judge.

Griese’s commentary was the first question for Nagy during his own postgame presser, and Nagy brushed it aside for now, saying:

“I don’t know, whenever you talk to Nick you’ll have to see where he’s at with that. Nick and I have a pretty good relationship and he’ll probably explain what he meant by that.”

For his part, Foles elaborated on it at length in his own press conference. From Jason Lieser at the Sun-Times:

“When Coach Nagy and I talk on the sidelines, we’ll go through plays and different situations and go through the defense,” he said. “I’ll be honest, like, ‘Hey, right now, maybe get the ball out quicker. They’re bringing some pressures,’ and whatnot. We were talking about game situations and Coach Nagy’s and [my] conversations and our relationship.

“Part of that was [that sometimes I say], ‘Hey, maybe we don’t have the time right now for this type of drop because of what they’re bringing, the pressures they’re bringing.’ It’s easier with that to go, ‘Hey, 1, 2, 3, ball out.’ That’s where the miscommunication lies.

“Those are actually conversations Coach Nagy and I have on the sidelines so that when we go to the field we’re ready to roll. I think that’s a valuable relationship I have with him, to be able to talk like that and understand specifically.”

That certainly makes sense, and it’s an admirable bit of crisis management from Foles as well. It’s not surprising that Foles would share that with Griese; it’s the kind of insight he might feel comfortable sharing with a former NFL quarterback ahead of a game. And he’s right, too, so it’s hard to imagine that there was a miscommunication in that sense; he noted it had nothing to do with the speed with which calls came in, for example.

Griese’s version made it sound like Foles was a lot more frustrated with play calls as they came in, though, which is a pretty big departure from the version Foles reported saying in the press conference.

In any case, there’s certainly a lot of blame to go around, and Bears fans and observers would certainly point to game-planning and play calls from Nagy as a key part of that. At the same time, quarterback play in Chicago has been, well, very bad; Mitch Trubisky is who we thought the was, and Foles tonight showed off his willingness to throw plenty of inadvisable balls into coverage, leading to two interceptions. This has been a pattern for Nagy’s Bears.

Not counting the Rams game, here's where the Bears rank offensively (cumulatively) over Nagy's 3 seasons —

But, thanks to a world-class defense, winning pct: 8th

So, what we had here, was a failure to communicate. One way or another, Griese’s comments probably weren’t meant for air; either he misrepresented what Foles told him in a way that was likely to stir up this kind of controversy, or he wasn’t supposed to share them at all. Bears fans looking for a distraction from the offensive woes now have one, at least.