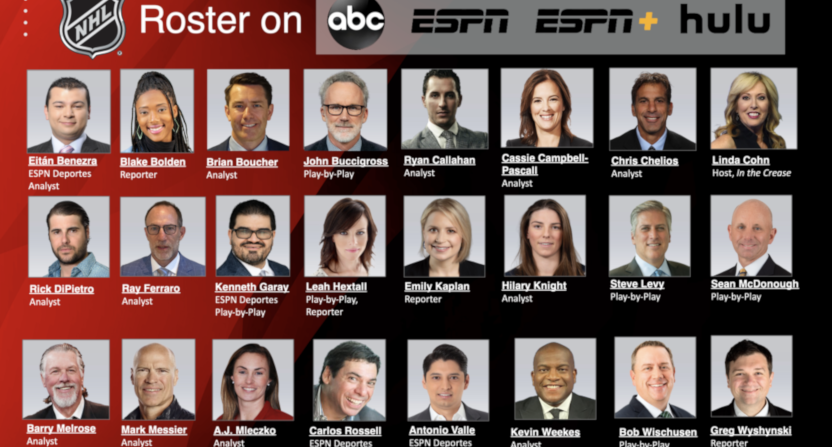 Since ESPN landed NHL rights back in March, with those rights beginning this fall, the network has been assembling a cast of on-air talent. On Tuesday, they officially announced who will be on their coverage this fall, and while the additions of many of those names have been previously covered here, there were a few new ones. Perhaps key amongst those are Cassie Campbell-Pascall (analyst, previously with CBC and Sportsnet), Rick DiPietro (analyst, also a morning show host for 98.7 ESPN New York), Hilary Knight (analyst, also currently a PWHPA and U.S. women’s national team player) and Blake Bolden (reporter, also currently a NWHL player). Many of those names were first reported by Sean Shapiro of The Athletic Monday night. Here’s a video ESPN put out around the announcement:

And here’s more from their release:

ESPN’s play-by-play commentary will be led by the award-winning Sean McDonough, with Steve Levy leading the studio team and calling several games throughout the season. John Buccigross, Bob Wischusen and Leah Hextall will also add their voices to play-by-play. The versatile Hextall was part of ESPN’s NCAA Division I Men’s Ice Hockey Championship and World Cup of Hockey coverage since 2016, and she will also serve as a reporter for some games throughout the season.

…“This new and groundbreaking lineup will bring the NHL to an expanding legion of passionate fans,” said Jimmy Pitaro, Chairman of ESPN and Sports Content. “We set out to put together a roster that would excite, engage and educate the entire range of fans – from diehard to casual – while inspiring the next generation. With this lineup, we believe we have done just that. We could not be more excited to welcome this talented and diverse group to the ESPN hockey family.”

There are an awful lot of analysts there, but they’re presumably going to be split amongst ESPN’s game and studio coverage, making that perhaps slightly less overwhelming. And, as we’ve seen with ESPN analysts in other sports, some of these analysts will probably wind up featured on other ESPN shows like Get Up as well. That release also mentions that ESPN+ nightly show In The Crease will continue with Linda Cohn as host (in addition to her work on SportsCenter and elsewhere), and it seems logical that some of these analysts will be featured there. The release also mentions that Kenneth Garay and Eitán Benezra will do Spanish-language play-by-play for ESPN Deportes, with Carlos Rossell and Antonio Valle as analysts for that coverage; it’s notable to see national Spanish-language broadcasts of the NHL, something that hasn’t often been the case.

Interestingly, while ESPN’s coverage here has many familiar names for hockey fans and many people who have been calling hockey for a long time, there aren’t a lot of people from current NHL broadcaster NBC. Boucher was at NBC, and Mleczko did a fair bit of work there (especially on the Olympics, but occasionally also on the NHL), and Ferraro did some (while having his main gig at Canada’s TSN), but a lot of these voices are coming in from Canada, or from NHL Network. Meanwhile, many of the NBC figures (including the lead team of Kenny Albert and Eddie Olczyk) have wound up over at Turner. So the ESPN coverage is going to look a fair bit different than the NBC broadcasts have. We’ll see how ESPN’s coverage is received.