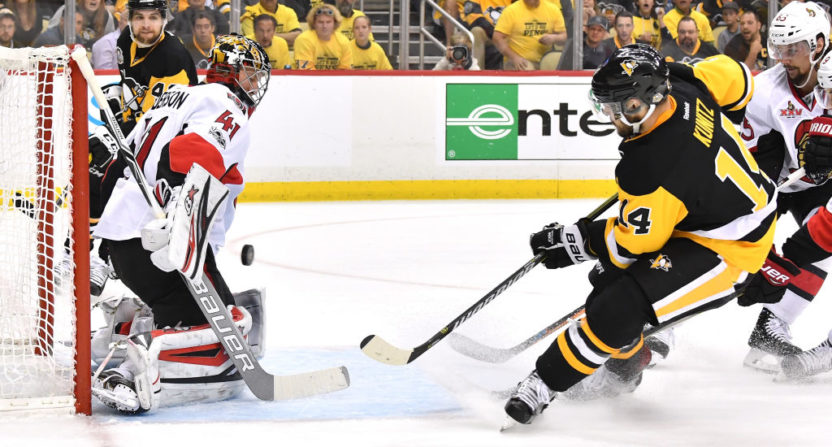 It’s been a long time since the NHL has been on ESPN airwaves and the relationship between Bristol and hockey fans… and even the ability of the sport to draw at a national level has been under a microscope ever since.

The NHL has made a lot of progress in the ten plus years that they’ve been with OLN/Versus/NBCSN. At the start of that deal in the mid-2000’s, the NHL was coming off a brutal lockout that canceled an entire season. As part of that first deal, the NHL entered into a revenue sharing agreement with NBC on broadcast and drew $65 million from OLN in 2005-2006. Ratings and revenue have certainly gone up for the league as their most recent contract between the NHL and NBC in 2011 came at 10 years and 2 BILLION dollars. When the league originally left ESPN for the Outdoor Life Network, I’m willing to guess that not many people thought a deal like that would be possible in the here and now.

The NHL has been the exclusive property of NBC and their cable outlet for well over a decade now. And while ESPN has been left out of the NHL picture, they do air college hockey and also won the rights to the recent World Cup of Hockey. And yes, in spite of the sometimes frosty relationship between NHL fans and ESPN, there are several on-air personalities at the network that are huge hockey fans. One of those is SportsCenter anchor and college hockey play by play man John Buccigross, who shared with BSN Denver that he is optimistic the network will be back in the game with the NHL this time around.

“I’m real optimistic that we’ll be a part of the NHL plan next time,” Buccigross told BSN Denver. “I’m not in the negotiations or decisions, but the negotiations open up in two years, and the (NBC) deal ends in three. There’s no doubt ESPN (was) very aggressive last time trying to get the package, and we’ll be very aggressive this time.. and I feel good about our chances to get some.. to have games in the next package.”

“Now, whether the NHL is going to go with multiple partners, like very other sport does. … you know, you can’t afford the NFL (alone), because every game is national obviously, there’s no local games. The NBA, there’s so many games (that) we share with TNT. And baseball has a million. So whether or not we split it and we have some and another carrier has some, we’ll see,” said Buccigross, who said he considered leaving ESPN to be a play-by-play man for two NHL teams before renewing his contract.

“But yeah, I think we’re in a position, with our new BAM investment that we made with MLB Media, that’s a huge technology investment that ESPN and Disney have made (and we’ll own the whole thing soon, 100 percent of it) that’s going to give us a great position, tech-wise, for apps and things and the future of streaming. I think we would be a very attractive partner, with obviously plenty of networks and plenty of channels.”

The NHL going back to ESPN is an interesting thought, isn’t it? The NBC partnership has been great for the NHL over the last ten years. It brought the league from teetering on the brink of relevance back to solid footing on the national stage. We’ve seen some of the most highly rated Stanley Cup games in history, dynasties in Chicago and Pittsburgh rise up, the advent of the Winter Classic, and a lot more positives from the relationship. Furthermore, NHL fans know they have a reliable, invested partner who is “all in” on hockey with the sport being their number one emphasis.

It’s difficult to see ESPN winning an entire package of NHL rights with their deals with the NBA, NFL, MLB, college basketball, and college football. There’s just not that much room on the schedule. And it’s equally as difficult to see NBC give up a significant chunk of its NHL inventory because NBCSN depends on those games to carry them through the sports year.

The NHL knows they won’t get the same treatment from ESPN… but they will get increased exposure. It’s up to the NHL to ask themselves whether or not they’ve gone as far as they can go with solely being on NBC and NBCSN. Is it time to split the package up and at least get some Stanley Cup playoff and regular season games on ESPN? Does ESPN3 and ESPN’s streaming platform make sense for some games going into the 2020s?

ESPN has been slowly inching their way back into the sport over the last few years. And with the NHL seeking some more mainstream national exposure, perhaps a reunion with ESPN would help everybody.