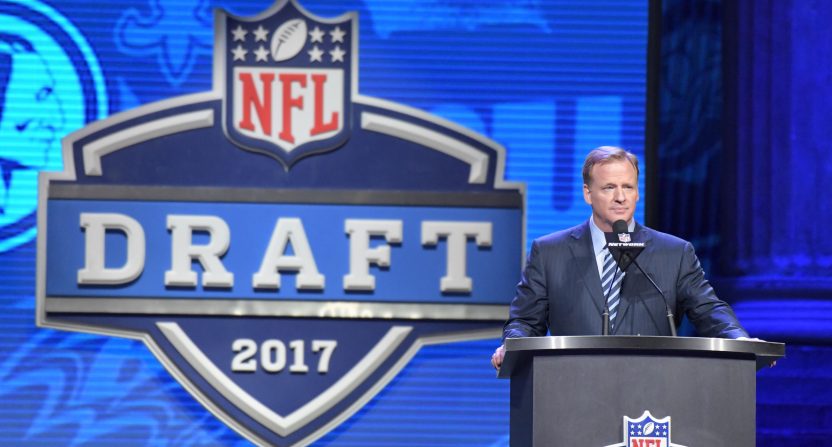 A confession: I enjoy the NFL Draft. I’ve always liked watching it, for whatever reason, even though I’ve always been a casual college football fan, while my overall enthusiasm for the NFL itself has waned in recent years. Once in high school, I fainted in the church parking lot ahead of the service, and I remember being somewhat relieved that I’d get to see some of the final rounds at the hospital. (I was fine.)

Now, though, I still enjoy following the draft, but in recent years I’ve done it mostly through Twitter instead of following the television coverage. This year, though, I was working last night, so I had the broadcast on, and I made a concerted effort to watch the show without spoiling myself with tweeted picks, just to see how that worked in 2018.

The answer: not that well.

This is certainly not true for everyone, thankfully, but I’m a bit too attached to Twitter at this point. That’s justified mostly thanks to what I do, but there’s a certain compulsive element as well; if I’m in public and the line for something is more than two people long, I’m probably going to pull out my phone. That’s all to say that your mileage may vary. But for me, watching ESPN’s broadcast as my sole conduit for draft news felt painfully outdated.

The pace was just so slow, and it was obvious when the anchors, analysts, and reporters were holding back information so as not to risk spoiling the upcoming picks. But knowing that led to some frustrating moments; every time Trey Wingo verbally winked to the audience with things like “Maybe they’ll go with one of those quote-unquote skill position guys here?” as Goodell weakly strode to the podium, I grew a little bit more annoyed.

Of course, there were also the fun moments like when the Saints traded a king’s ransom to the Packers to move up from 27th to 14th. The speculation on set was that Lamar Jackson was heading to New Orleans. And while Jackson was certainly a valuable prospect, he likely wasn’t in any danger of being taken at 14; how could the analysts look at the price New Orleans paid (their 2018 first, their 2019 first, and a 2018 fifth) and think they were doing that in order to draft a backup for Drew Brees, who likely has at least a couple of years left?

But that’s where they went, spending an odd amount of time on Jackson’s fit in New Orleans, only to see the Saints take Texas-San Antonio defensive end Marcus Davenport. It was amusing.

A quick sidebar: Sean Payton defending the draft strategy as though he and Mickey Loomis are playing 3-D chess, when Payton played the PGA Tour pro-am on Wednesday in New Orleans and then worked on his game after:

It’s 5:15 p.m., and New Orleans Saints coach Sean Payton is the only one still grinding on the range at Zurich. Must not be concerned with tomorrow’s NFL draft.

to me this has been one of the better stories of draft week so far. Head coach spent the day playing the Zurich pro-am, finished, and *then* went back out to the range to grind and find his release patterns. The night before the draft. https://t.co/ewoZOcfeo3

The ESPN broadcast is competent, of course. Trey Wingo, Louis Riddick, and Kirk Herbstreit did a fine job, and Mel Kiper was there too. (Thankfully Lee Corso’s giant Mel Kiper head didn’t make it inside.)

But it’s still a three-plus hour show with a ton of filler. Following on Twitter, though, gives you the option to do other things, all while getting information way ahead of the telecast. It also allows for a wider array of voices, meaning you don’t have to listen to Kiper justify Josh Allen as a top quarterback prospect when all the measurables would seem to show he’s, well, not that.

It’s just a more enjoyable experience, playing to the strengths of Twitter (news out quick, analysis out quickly too, everything in one place, actual fun, etc.)

It’s the better way to follow the draft, and it’s hard to see what the television side could do at this point to close the gap. Watching without Twitter was the best way to learn that for sure, and if I had to pick just one method going forward, it would certainly not be the traditional broadcast.