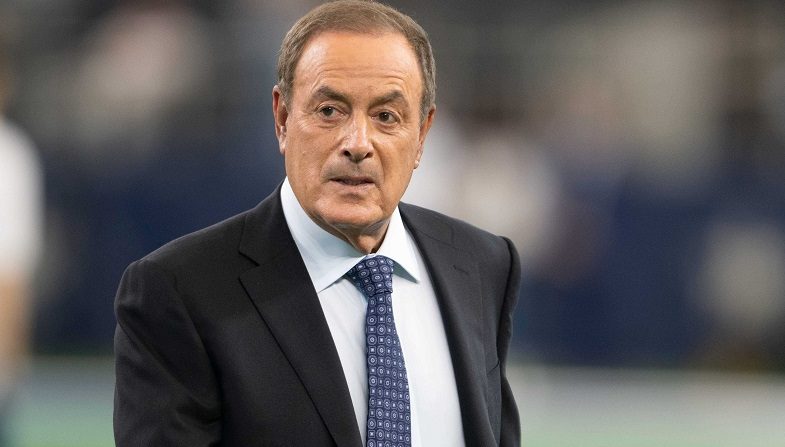 As you probably would have guessed, NBC will not be trading legendary play-by-play broadcaster Al Michaels to ESPN. After his initial report of the dream deal, the New York Post‘s Andrew Marchand has followed up with news that such a trade won’t be happening.The hope for ESPN was that getting Michaels would entice Peyton Manning to join the Monday Night Football booth, giving the rookie analyst a strong play-by-play partner and creating a broadcasting pair that could conceivably draw viewers regardless of what matchup was being presented.https://youtu.be/d89Y2YPYVRYFor some, it may have been fun during the past week to speculate upon what that kind of deal would entail. After all, Michaels was traded to NBC from ESPN in exchange for obscure (“historic”?) cartoon character Oswald the Lucky Rabbit back in 2006. Maybe this time around, Michaels could’ve been dealt for the X-Men, now part of the Disney empire after the Fox merger.There have also been more practical trades. As Awful Announcing’s Joe Lucia pointed out, ESPN traded Ryder Cup coverage to NBC for Premier League highlights in 2013.Yet this scenario was the very definition of a pipe dream for ESPN. Such a transaction made no sense for NBC, which has a juggernaut with Sunday Night Football. Why break up the successful duo of Michaels and Cris Collinsworth, even if Mike Tirico would be ready to take over play-by-play duties? That succession plan is already in place, for one thing. Michaels, 75, has two years remaining on his contract with NBC, the last of which includes the Super Bowl LVI telecast.SNF is the top-rated show in prime-time. Why would NBC be interested in helping ESPN improve MNF and possibly chip away at that ratings dominance?https://youtu.be/7zQwd6z8SJkMarchand speculated in his report that a deal could be revisited. Yet it seems unlikely as ESPN has to look at other options for the MNF booth, whether that play-by-play broadcaster is paired with Manning or not. Among the possibilities mentioned are Ian Eagle and Kevin Harlan from CBS, along with Fox’s Kevin Burkhardt.Another alternative might be Steve Levy and Brian Griese, one of ESPN’s current college football broadcast teams. The pair could team with Louis Riddick, as they did for one of the season-opening MNF telecasts.If Manning turns down what is reportedly a gargantuan offer that could surpass the record-setting deal Tony Romo signed with CBS, ESPN needs to find a top analyst as well. The network showed interest in Philip Rivers and Drew Brees, but both will continue playing football. (Rivers, however, has not yet signed with a team.) Kurt Warner could also be in the mix as ESPN tries to find a name that will make big headlines and presumably attract viewers. Dan Orlovsky doesn’t have the same star power, but his analysis is helping his profile rise.It’s also entirely possible that ESPN sticks with Joe Tessitore and Booger McFarland on MNF. But considering how hard the network appears to be working to find replacements and how unpopular the pair has been with viewers, that seems doubtful.