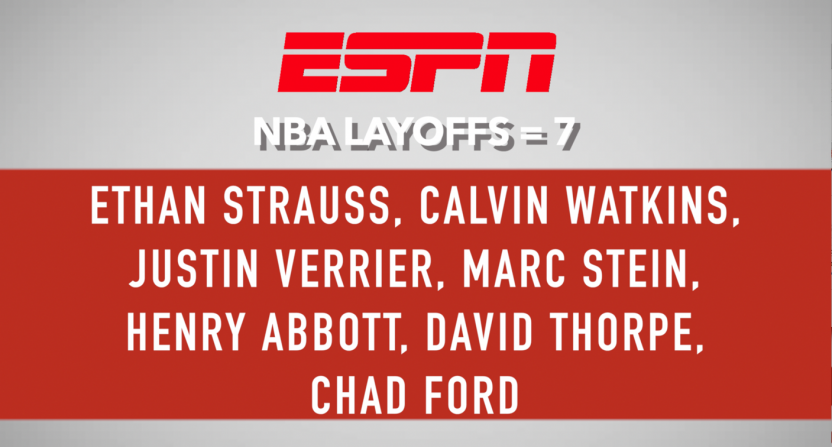 On Friday, we learned of two shocking additions to the list of ESPN layoffs.

The first was Henry Abbott, the founder of True Hoop and essentially the godfather of NBA blogging. Many of the best basketball writers in the country got their start thanks to Abbott and the blog network he spawned. If you need evidence of how vital Abbott was to NBA writing, see a sample of the testimonials that poured in Friday.

Without @TrueHoop there would be no NBA Internet. It's impossible to overstate how important Henry Abbott has been to this world.

Incredible to think about how many writers — some of the biggest/best in the sport — got their first real shot/exposure w @TrueHoop.

.@TrueHoop’s enduring legacy at ESPN: He made an entire profession more thoughtful and more curious. Can’t wait to see what’s next for him.

The second notable layoff was Marc Stein, one of the two most prolific NBA reporters in the country (we’ll get to the other in a moment) and a huge presence across ESPN platforms. Amid a torrent of loud-mouthed opinion-makers, there was Stein quietly breaking news. He was as trust-worthy a voice as the network had.

In effect, ESPN gutted its NBA operation in two moves. It slashed its blog operation by firing Abbott and undermined its commitment to breaking news by canning Stein. The network has also laid off Ethan Strauss, Calvin Watkins, David Thorpe and Justin Verrier. All of which begs the question: Is ESPN giving up on covering one of the most popular (and fast-growing) sports in the country?

Immediately after the Stein news dropped, Twitter blew up with speculation that these firings mean The Vertical—Yahoo’s NBA site led by Adrian Wojnarowski—could soon be under ESPN control.

All these ESPN NBA layoffs make it seem obvious The Vertical is going there.

We’ve got no inside information here, but an ESPN purchase of The Vertical makes a ton of sense. Yahoo is struggling even more than ESPN is and might not be in a position to maintain such a deep stable of NBA writers. Deadspin reported back in February that Woj was headed to ESPN, and while that never materialized, there was obviously some smoke.

Another @nba reporter has been let go — more room for arrival of @WojVerticalNBA & @TheVertical to @espn this summer. #ESPNLayoffs

Plus, ESPN taking over The Vertical would make Friday’s layoffs seem much more sensible. Marc Stein is expendable if you plan to add Woj (America’s other top NBA breaking news reporter), Bobby Marks and Shams Charania. And maybe the loss of Abbott doesn’t hurt quite so much if Chris Mannix and others are on the way over. The Vertical also has a successful podcast network, that could easily replace the popular True Hoop podcast.

The biggest reason to believe ESPN is going after The Vertical: The alternative is a profoundly diminished approach to covering a sport that continues to grow in popularity and prominence. And if ESPN can’t find money even for NBA coverage, that’s a scary thought.