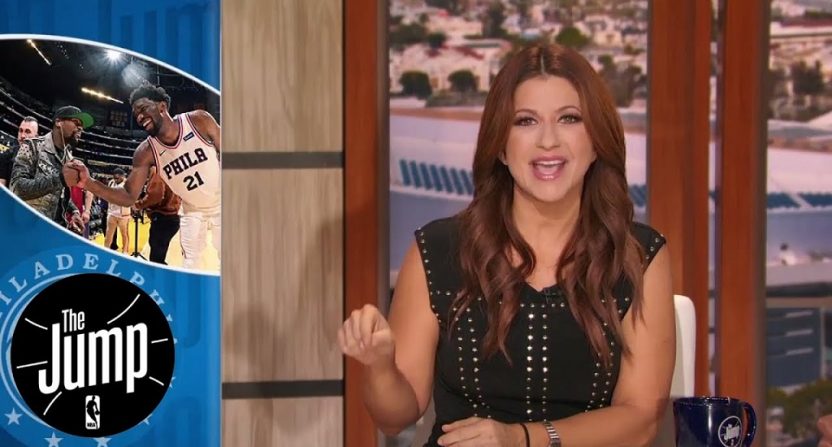 In recent years, the NBA offseason has become almost as interesting and entertaining as the actual action on the floor. Much like the NFL, the NBA has become a year-round attraction thanks to the drama and intrigue surrounding player movement, especially the free agency period that has seen the game’s biggest names like LeBron James and Kevin Durant find new teams. In fact, one could even argue that the NBA offseason has surpassed the NFL offseason for the amount of news that is made.

This offseason may be the biggest one yet for the NBA with Kawhi Leonard, Durant, Kyrie Irving, and other top stars preparing to hit the market. And ESPN is treating it as such by devoting several extra hours of programming towards covering the beginning of the free agency period. Specifically, Bristol will be airing special episodes of The Jump, the highly acclaimed NBA studio show hosted by Rachel Nichols, and Get Up, Mike Greenberg’s much talked about morning show.

First, ESPN announced that The Jump would have primetime specials airing on Monday, Tuesday, and Wednesday next week in addition to their regular airing at 3 PM on ESPN2. Another special featuring reporter Adrian Wojnarowski and writer Zach Lowe will be coming this week as well.

Second, Front Office Sports reported that Get Up would be getting afternoon specials every day next week except for the July 4th holiday featuring the show’s NBA-centric cast of Greenberg, Jalen Rose, Jay Williams, Richard Jefferson, and many of the network’s top NBA reporters. It may seem weird for a program entitled Get Up to be featured in the middle of the afternoon, but this is the same network that airs High Noon at 4 PM ET, soooooooo…..

Mike Greenberg and ESPN’s Get Up morning show are coming to afternoon TV.

Greenberg and his Get Up team are planning four ‘double-header’ show days during the first week of July, ESPN confirmed to Front Office Sports.

To capitalize on fan interest around NBA free agency, Greenberg will host four afternoon Get Up specials on July 1, 2, 3 and 5.

Greenberg’s show will lean heavily into NBA coverage, and will likely be joined by NBA-focused ESPN talent such as his Get Up co-host Jalen Rose, Adrian Wojnarowski, Ramona Shelburne, Brian Windhorst, Jay Williams and Richard Jefferson.

The four specials will air from 4:30 p.m to 6 p.m on ESPN. Get Up will continue to air in its normal weekday morning slot from 8 a.m. to 10 a.m. Those morning episodes will switch to ESPN2 that week due to Wimbledon coverage on ESPN.

Front Office Sports also notes that Get Up‘s extra airtime is coming when the show is up 19% versus last year’s ratings. It’s no secret that Get Up got off to a very rough start after being one of the most heavily hyped shows in ESPN history. Get Up was never going to completely transform the way sports television worked, but it’s at least turned into a perfectly cromulent show. After its early wobbles (and the departure of original co-host Michelle Beadle) the show did settle into a rhythm, especially when covering the NBA. That seems to be Get Up‘s wheelhouse with Rose, Woj, Jay Williams, and even some refreshing new faces like Richard Jefferson.

The all-day NBA free agency coverage may seem like overkill to some, but if the NFL is 1A in ESPN’s coverage priorities, then the NBA has moved to 1B status. And if ESPN can be live on the air with one of these shows when major news like Leonard or Durant or Irving’s next move breaks, it’ll be well worth the time investment.