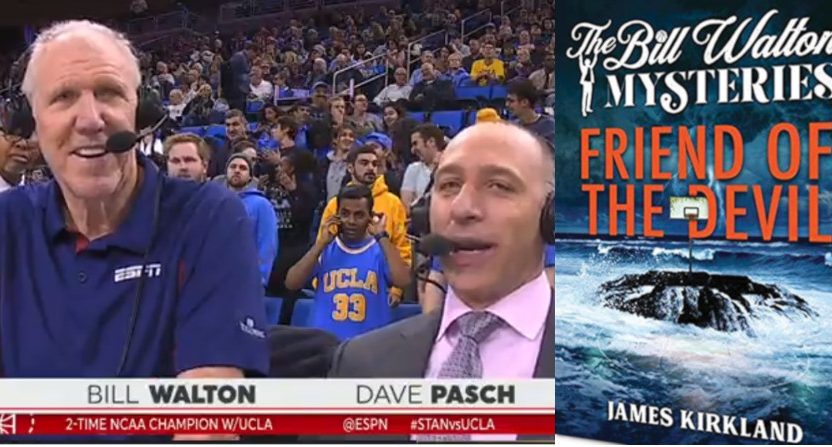 In what may be the most amazing story that we have ever unearthed at Awful Announcing, there exists an actual mystery novel that pictures Bill Walton as a detective solving mysteries between basketball games. And Dave Pasch is there too! It’s real, we promise – see, there’s an Amazon link and everything!

The novel is called Friend of the Devil, written by James Kirkland, a basketball fan and screenplay writer from Portland who is a fan of Walton. It promises to be the first novel in the Bill Walton Mysteries series. Of course, the big redhead starred for the TrailBlazers during his professional playing days and has become a cult favorite over many years as an announcer covering the NBA and college basketball. His current partnership with Dave Pasch calling Pac 12 college basketball may be the funniest and most enjoyable broadcast pairing in all of sports. A Walton-Pasch broadcast is half basketball game, half situational comedy, and half existential discussion about the state of the universe.

Earlier this month, Aaron Mesh of The Willamette Week talked to Kirkland about the book and the future series and the description sounds just as unbelievably phenomenal as you could imagine:

The book’s author, James Kirkland, 38, is a Northeast Portland native now acting and writing screenplays in Los Angeles. He was in the stands of a Lakers game when the idea struck him.

“I love Jack Reacher novels,” says Kirkland. “Detective hero airport paperbacks are my favorite kind of books. I chew through them.”

Versed in the lore of Walton from childhood, he decided the garrulous Blazers legend could carry a potboiler. “Walton seems like the kind of guy who, if a friend came to him in need, he would do anything to help,” Kirkland says. “So I just took that to the most extreme and fictional place possible, of him fighting crime.”

Kirkland has already started the second book in what he hopes will be a trilogy. The next location: Hawaii, where Walton will sleuth while broadcasting the Maui Invitational.

There is nothing more that I now want from life than ESPN turning these books into a movie, making a Walton & Pasch buddy cop drama. It’d be bigger than Playmakers! Bigger than Tilt! ESPN could even bring back Michael Madsen as a college basketball coach slash criminal mastermind! Why stop at ESPN, though? Let Disney go all-in with Walton & Pasch taking over from the Avengers as the top film series in American culture.

Lest you think this is all in jest, the Amazon reviews of Kirkland’s book are actually quite stellar. This one may be the best, though:

I didn’t even know who Bill Walton or Dave Pasch were before reading this book, but I’m a huge Sherlock Holmes fan and thought this might be a fun take on the Holmes/Watson dynamic. The book was entertaining from start to finish, I can’t wait for the next Bill Walton mystery!

Now just imagine how much more enjoyable reading this will be if you know who Bill Walton is. Ten stars.