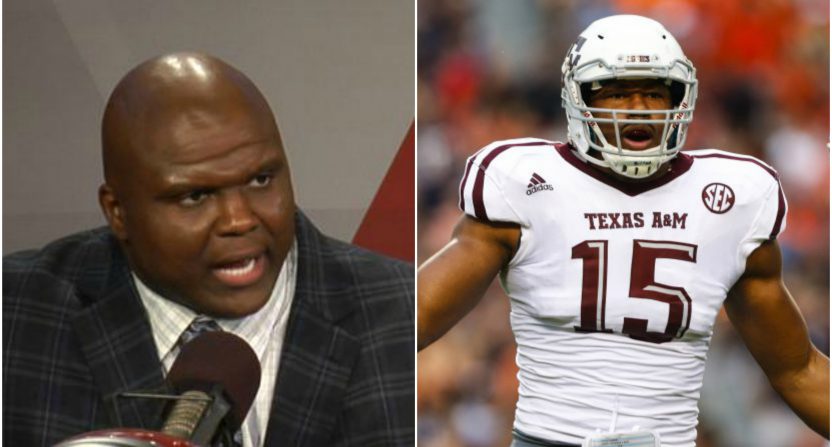 Likely top-5 NFL Draft pick Myles Garrett is in Bristol on Monday to make the rounds on the ESPN talk shows. First up, the former Texas A&M defensive end was supposed to appear on Mike & Mike for what would have likely been a light-hearted interview.

But Garrett did not visit Mike & Mike, and according to Mike Greenberg, his absence was due to a beef with SEC Network analyst Booger McFarland, who was filling in for Mike Golic on Monday.

As transcribed by The Big Lead, here’s what Greenberg said in announcing Garrett’s cancelation.

“I’m told there is some sort of issue that he has with something you have said. That’s just is what it is — that would be neither the first nor last time that has happened.”

And here’s how McFarland, a two-time Super Bowl winning defensive tackle who played at LSU in the late 90s, explained the situation, per The Big Lead:

“I follow Texas A&M very closely, having worked with the SEC Network,” McFarland said. “Over the last couple years, I’ve followed Myles Garrett. I’ve talked about their team, and their lack of toughness — their lack of physicality — it’s one of the things that I’ve always looked at in Myles Garrett. Everyone looks at the numbers he put up at the Combine. They’re outstanding numbers, and the athletic ability says he’s going to be a Hall of Fame type player.

“I haven’t always seen the athleticism turn into playmaking ability on the football field, nor have I seen the physicality. To me, that’s the one question I have. So, in a day and age where we’re all watching the Combine saying, ‘Hey there he is, he’s the number 1 pick, best player ever,’ I’m just a little hesitant. And I always take a step back — because I’ve seen the guy play football — he is a tremendous athlete.

“But being an athlete doesn’t make you a football player. Ask Mike Mamula, who tore up the Combine but couldn’t break an egg in the NFL. I’m not saying Myles Garrett is gonna do that, but I just look at the tape — and the tape never lies, Greeny — and the tape has said that although he is a tremendous athlete, I just wonder how much does he love playing defensive line and being hit and the collisions that take place time after time. The tape says he’s been hesitant to do that over the last couple years.”

Sorry to the @MikeAndMike fans, Myles Garrett didn't wanna come on due to critical comments I've said in past about his play

And also retweeted this…

Myles Garrett refused to come on @MikeAndMike because of criticism from @SECBooger. I'm sure that helps that "soft" image #mvsu_rys17

It’s a bit surprising that Garrett, known for being affable and uncontroversial, would bail on an interview like that, especially in the PR-soaked run-up to the NFL Draft.

Then again, it’s not hard to see why Garrett would be displeased by those type of comments. No player likes being thought of as a combine freak out without actual football skills, and that sort of criticism can sometimes carry subtext about a player’s effort or dedication.

Garrett will appear elsewhere on ESPN on Monday, so the world won’t be deprived of his undoubtedly profound pre-draft insight.