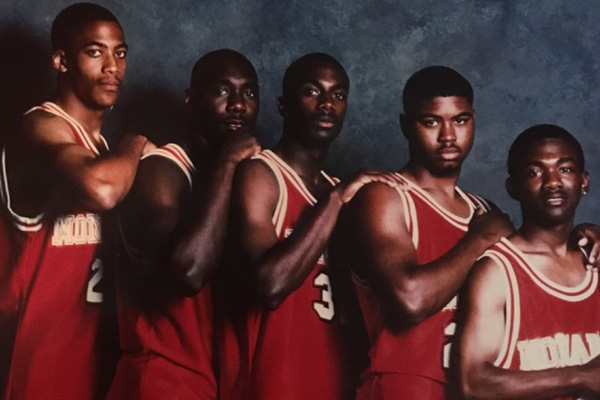 Morningside 5, the second film following at 9:30 p.m., has a name behind it that should be quite familiar to fans of ESPN’s 30 for 30 documentary series, in addition to several sports documentaries that have played on other outlets such as HBO and Showtime. Mike Tollin produced nearly all of the films in the original 30 for 30 series of documentaries, including Kings’ Ransom, Without Bias, Jordan Rides the Bus, The Two Escobars, and Pony Excess.

Tollin has also directed many notable sports docs, such as 1995’s Hank Aaron: Chasing the Dream and 2009’s Small Potatoes: Who Killed the USFL? That film may currently be the most resonant in the 30 for 30 series, considering Donald Trump’s role in the documentary, including a contentious interview with Tollin.

Morningside 5 represents the culmination of a 25-year project for Tollin. In 1992, he made a documentary following the Morningside High basketball team in Inglewood, California, one of the best high school teams in the country. But their run to a second consecutive state championship encountered several obstacles and didn’t go as planned. Tollin revisited the five stars of the Morningwood High team 10 years later for another documentary. But neither film reached a wide audience (the first, titled Hardwood Dreams, played on Fox, the second on Spike) due to limited distribution and television options at the time.

Tollin is in a much better position to find a bigger platform for his third take on the 1992 Morningside High team. He has a great relationship with ESPN due to “being invited into the tent,” as he puts it, with the first series of 30 for 30 films, in addition to the connections he’s made at other networks with his nonfiction and feature films, as well as his production company, Mandalay Sports Media. He’s involved in making five films for the Olympic Channel that will highlight athletes who made an impact beyond sports.

Besides ESPN and HBO, many other outlets like Showtime, Netflix, Epix, VICE Sports and Amazon are entering the sports documentary space. In some instances, that’s meant making shorter films for digital outlets, perhaps with the hope that they’ll serve as trailers or proof of concept for a longer work. But all of those factors didn’t mean that getting Morningside 5 on ESPN was an automatic deal.

“There are way more outlets, but the barriers to entry are way lower,” Tollin said in an interview with Awful Announcing. “So it’s way more competitive. It’s great to generate an idea and see prospective buyers.

“But the challenge is to be tough on yourself and tough on your subject, and be fair to the audience. We all tend to elevate what we’re interested in, and think everyone will share that interest. How many subjects lend themselves to that kind of content? It’s a very small number, very few. The great news is, not necessarily more buyers, but more flexibility in creating content and finding an audience.”

Tollin acknowledges that Morningside 5 isn’t a documentary that fits the conventional 30 for 30 format, and his relationship with Connor Schell (now ESPN’s executive vice president of content) allowed for an opportunity that might not have been available to other filmmakers.

“It’s a film that has been in the making for 25 years,” said Tollin. “That was the first thing I did in L.A. when I moved out here in the early 90s and started with Brian (Robbins).” That first documentary gave him something to show producers like Denzel Washington and Russell Simmons to facilitate subsequent documentaries such as the Hank Aaron film.

Much like Michael Apted’s “Up Series” of documentaries, which has followed a group of British children from the age of seven throughout the stages of their respective lives every seven years since 1964, Tollin had a similar idea in mind for documenting the lives of the five Morningside High stars.

“There’s no substitute for that scope,” Tollin said. “Just to be able to see these people, their ideas change and stay the same, to see them reflect on their lives with regrets or not. The challenge with this film was five guys — each in three eras, so 15 separate storylines — that we have to figure out how to integrate and allow the audience to follow. Ultimately, we kind of acknowledged that no one saw the first two films. We made a deal with a home video company that went out of business, so you can’t even get the first two.”

Tollin eventually decided to tell the story in a more linear fashion, which allows viewers to follow the five basketball players as they get older and experience the emotional punch of what happens to them later in their lives, near their 40s, when their dreams are out of reach. Neither of the five made it to the NBA. A couple of them endure heartbreaking circumstances which derail whatever plans they may have had. A speech given to the young stars by then-Notre Dame coach Digger Phelps turned out to be prophetic. You need a Plan B in case basketball doesn’t work out, which the odds say is highly likely.

“They survived and figured it out. Basketball took them as far as it could,” said Tollin. “They moved on and made lives for themselves. That’s about as personal a journey as I’ve covered. I’m just grateful to ESPN for giving me the creative freedom to tell that story.”