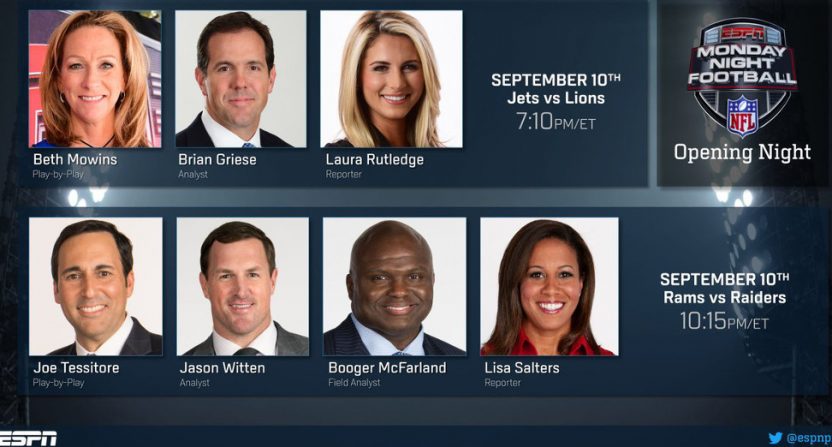 The season-opening Monday Night Football doubleheader has often seen an unusual announcing team, whether that’s Mike Greenberg, Mike Golic and Mike Ditka (2007-2009), Chris Berman and Trent Dilfer (several years ending with memorable disasters in 2014 and 2015), Berman, Steve Young and Lindsay Czarniak (2016), or Beth Mowins and Rex Ryan (last year). But the atypical broadcast team has always previously been put on the late game, following the usual Monday Night Football cast on the first half of the doubleheader. This year, ESPN’s flipping the script.

Back in May when the network unveiled their new MNF team (Joe Tessitore, Jason Witten, Booger McFarland and Lisa Salters), they announced that the new team would make its debut on the Sept. 10 opening late game (Rams-Raiders). As per that release, this marks “the first time in the 13-year history of the week 1 doubleheader format that ESPN’s top crew will call the late game.” And they’ve now announced the announcing pairings for the early Jets-Lions game, which will see Mowins return alongside Brian Griese and reporter Laura Rutledge.

Mowins made history last year on the Chargers-Broncos broadcast, becoming the first woman to call a nationally-televised NFL game and the first woman to call any regular-season NFL game on television in 30 years. (She later followed that up by calling some NFL games for CBS in addition to her regular college football work for ESPN.) She has plenty of NFL experience, calling Raiders’ preseason games from 2015 on and doing that MNF and CBS work last year. And while last year’s broadcast didn’t go over well with many viewers, much of that was about first-time booth analyst Ryan, who admitted later in the year that he prefers studio work anyway. So it makes sense to change that part of the equation.

And Griese has extra experience that should help compared to Ryan. While most of his ESPN work since 2009 has been as a college football game analyst, that’s still useful broadcasting experience, and he should be a much more natural fit in the booth than Ryan was. Griese also played in the NFL from 1998-2008, and he’s broadcast NFL games before too, calling Broncos’ games on radio from 2011-12 and calling Broncos’ preseason games on TV last year and this year (alongside Ron Zappolo last season and ESPN colleague and college football broadcasting partner Steve Levy this season). So that should be a lot smoother than the Ryan experiment. Griese’s experience was spotlighted in a quote from ESPN senior vice president Stephanie Druley in their release:

“Beth will continue her groundbreaking NFL role calling another prime time game on Monday Night Football with Brian, whose experience in the league combined with his ability as a broadcaster makes him a natural fit for this assignment,” said Stephanie Druley, Senior Vice President, ESPN events and studio production. “Joined by Laura on the sidelines, this talented and entertaining team will kick off our NFL opening night on ESPN.”

We’ll see how this goes and what the reaction to having the secondary crew call the early game is. Given that much of the world doesn’t follow media news, there might be some confusion with this, with people thinking the voices they hear on the first game will be the ones they’ll hear all season long on Monday Night Football.

But it makes some sense to do this, as the Rams-Raiders game is more anticipated by many. The Rams went 11-5 last year and are a trendy Super Bowl pick, and while the Raiders were just 6-10 last season, they have some buzz after giving former MNF analyst Jon Gruden a massive contract as their new head coach. Meanwhile, the Lions were 9-7 last year and the Jets were 5-11, so there’s perhaps less national excitement there. We’ll find out how the early-late flip works out for ESPN, but it’s certainly an interesting idea.