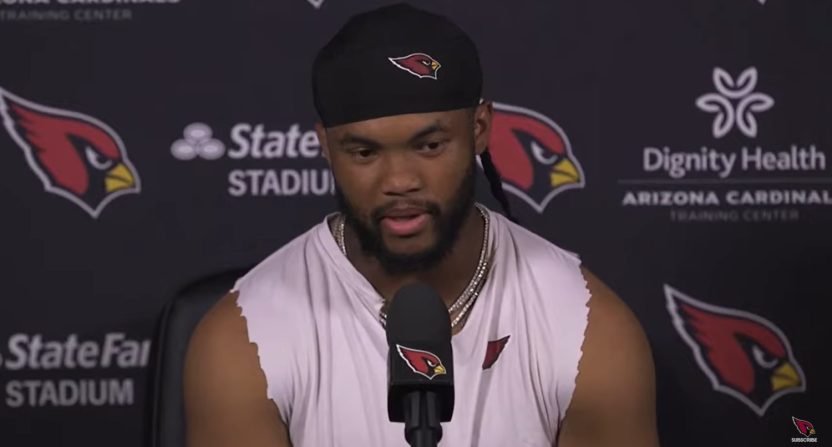 Kyler Murray was sidelined for the Arizona Cardinals Monday Night Football game against the San Francisco 49ers, but ESPN’s analysts kept him at the center of their pregame show, and not in a good way.

Usually, starting quarterbacks missing a national broadcast is a bad thing for the network, but ESPN’s Monday Night Countdown crew treated Murray’s absence as if it was a positive as they hyped backup Colt McCoy. Leading the charge against Murray was his former teammate Larry Fitzgerald, along with his Monday Night Countdown co-analysts Robert Griffin III and Steve Young.

Here was ESPN’s hard in the paint segment talking about Colt McCoy vs. Kyler Murray. Can’t recall the last time I heard a crew get after a guy like this. pic.twitter.com/gU1I6OTwo6

“The conversations with former teammates were glowing about his leadership — leading meetings, taking the onus,” Fitzgerald said of McCoy. “If he makes a mistake, saying, ‘That was on me, I’m gonna get it fixed.’ That’s a big part of being a leader.”

The backup quarterback is often the most popular player on a team because they represent the unknown. But we know what McCoy is. He’s 36 years old and amassed just 11 wins in his NFL career as a starter. Kudos to McCoy for being accountable, but acting like he’s a better option under center at this point in their careers is oddly disrespectful to Murray.

While Fitzgerald focused on McCoy, Griffin bluntly pointed the finger at Murray for the Cardinals’ struggles this season that has put head coach Kliff Kingsbury on the hot seat.

“You pay the man $230 million, there must have been something that you saw that you liked,” Griffin said of the massive contract Murray signed with Arizona in the offseason. “For me, it just seems like Kyler’s on his own sheet of music when he’s playing the game. He’s on the sidelines, he’s having arguments with the head coach. It’s like David Ruffin in The Temptations, right? And Kyler Murray is David Ruffin.”

“I would go back to what they did in the preseason. They made him call plays just to show him how difficult it was. I would take it a step further. I would make Kyler Murray install the offense every week for the rest of the season because he is the one that is seeing the game at the quarterback position,” Griffin continued, believing that by handing the offense over to Murray, he would receive all the blame when it doesn’t work.

Hall-of-Famer Steve Young took a turn at assessing Murray next, claiming it’s time for the quarterback to go back to school.

“Kyler Murray his whole life has had the answers to every athletic test that he’s ever taken. He’s gotten A+’s through middle school, high school, college, and then even early here in the NFL,” Young said. “The NFL will have its referendum, and I think it’s happening now for Kyler. He’s whip-smart and he knows everything, but there is a part of playing great quarterback that is going back to school. That’s what Patrick Mahomes has done, that’s what Josh Allen (has done), that’s what Dak Prescott has talked about doing.”

Those are some harsh assessments for someone who was very recently believed to be a superstar in the NFL. One year ago, Murray was arguably the most exciting player in the league and was considered to be a candidate for MVP. But after a poor finish to the 2021 NFL season, a curious film study clause in his contract, and a disappointing first half in 2022, Monday Night Countdown appeared confident in questioning Murray’s ability to lead, study, and be coached. If 25-year-old Kyler Murray is washed, maybe 36-year-old Colt McCoy is the future.