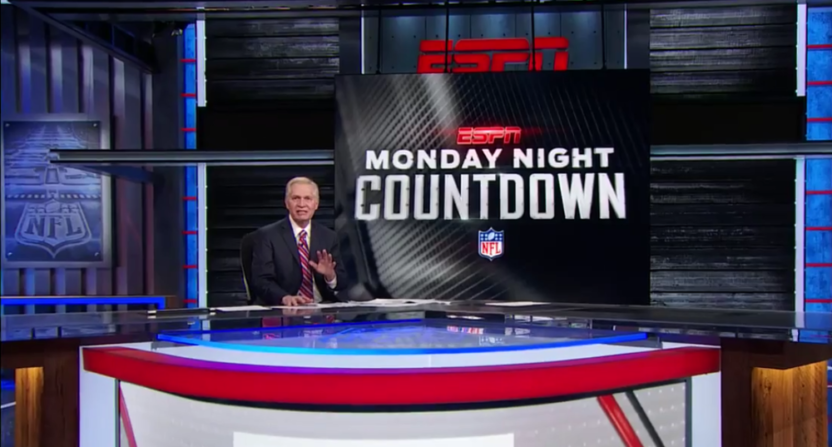 ESPN regularly airs preview show Monday Night Countdown from the stadium of each week’s Monday Night Football game, but that led to some unusual occurrences this week at Kansas City’s Arrowhead Stadium. Around 7:46 p.m. Eastern, in the middle of Steve Young’s comments on Chiefs’ coach Andy Reid, the video feed froze on a still frame of Reid for 10 seconds, then cut to an Applebee’s “Hungry Eyes” commercial:

An elongated commercial break followed. Five minutes later, Chris Mortensen came on screen, presumably from ESPN’s Bristol, Connecticut headquarters, and said “They are experiencing technical difficulties in Kansas City and we hope to have those all fixed up. We’ll be back to you shortly after we do,” before the broadcast went to commercial again.

After around five further minutes of commercials (including one with Monday Night Countdown and Monday Night Football personalities Jon Gruden and Adam Schefter shilling for Dunkin’ Donuts), they threw to the SportsCenter feed from ESPNews, with anchor Doug Kezirian welcoming in ESPN viewers and apologizing for the technical difficulties:

Kezirian ran through a basketball story on LeBron James, then promoted Wednesday’s WNBA Finals game, then set up a MLB “Images of the Season” video. After that, five minutes after Kezirian first appeared on air and at the end of the hour, he brought up football again to promote the MNF game, then promoted Scott Van Pelt’s post-game SportsCenter, set up the ESPN2 Spanish-language feed of Monday Night Football, and said SportsCenter would continue on ESPN.

Afterwards, Kezirian started talking football again, showing images from warmups at Arrowhead Stadium and throwing to a sideline report on injuries from Lisa Salters at the stadium. The “Technical Difficulties” scroll continued on the Bottom Line ticker, though.

After the Salters report, Kezirian introduced a Michelle Beisner-Buck feature on former Chiefs’ coach Marty Schottenheimer, so that was pretty much regular Countdown. However, it normally would have been set up by that show, not by SportsCenter, and the technical difficulties crawl continued through most of the eight-minute feature.

When it wrapped up, though, the broadcast returned to the sideline Countdown set with Suzy Kolber, Herm Edwards and Beisner-Buck at 8:08 p.m. Eastern, 24 minutes after the initial glitch. Kolber apologized for the technical difficulties:

“Of course, we do apologize for our technical issues, but especially on a day like today, I think we have a pretty good perspective on what’s bad news.”

The broadcast continued as normal from there. A source told Awful Announcing the issues came from the whole ESPN compound in Kansas City losing power, possibly thanks to a generator issue. This comes on the same day as Monday Night Countdown doing more extensive pre-game tailgating coverage outside the stadium than normal, but there’s no information on if that’s connected. The remainder of Countdown and the actual game broadcast appeared to run smoothly.