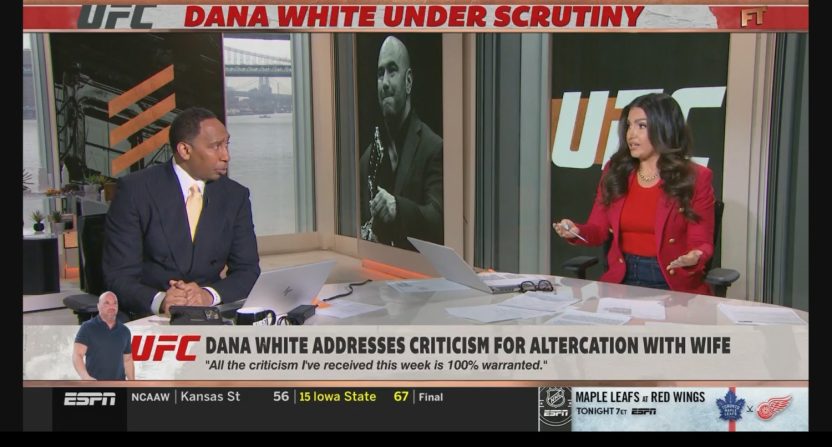 After getting criticized over their first attempt at addressing Dana White for slapping his wife, ESPN’s First Take tried again Thursday morning.

White has been under just scrutiny since video emerged of him slapping his wife, Anne, while they were celebrating the New Year. On Wednesday, White spoke to reporters and deflected any public defense, acknowledging he deserves shame over the incident, but the UFC president added that he would not face any formal punishment.

“This is going to make a lot of people uncomfortable, but what he said was actually factual from this perspective,” Smith said of White’s claim that public shame is more of a punishment than any official discipline from UFC or its owner, Endeavor. “What exactly is it that you’re going to do?”

Qerim quickly reminded Smith that “it’s a privilege to be the face of a company,” and definitively stated White should be punished by Endeavor.

“They have to create a policy,” Qerim said. “They have to look at what happened with fighters in the past and it has to be more severe from the simple fact that he’s in a leadership role, he’s the face of the company.”

“Fine, then people should be talking about that,” Smith replied. “They shouldn’t be looking at Molly and Stephen A. saying, ‘your tenor and your tone, it wasn’t aggressive enough.’ What do you want me to say?”

No one expects Stephen A. Smith to personally hand Dana White a punishment after the UFC president slapped his wife on camera. But if Smith is going to address the issue, then he needs to address it without bias.

The clip Awful Announcing shared on social media last week of First Take discussing the gross video of White offered full context. And in that clip, Smith abhorrently claimed White should be in charge of his own punishment. When speaking about the issue again Thursday morning, Smith questioned whether any formal discipline from the UFC would be productive.

The disclosure of their friendship and relationship is important, and it’s something ESPN’s audience needs to be aware of. But when Smith follows touting their friendship by claiming White should determine his own punishment, or that public shame and ridicule is enough of a penalty, then credibility on the issue is lost.

On Thursday morning, Qerim, however, did not let her friendship with White get in the way of prioritizing the issue of domestic violence.

“Domestic violence is egregious, it’s unacceptable, it shouldn’t happen and he shouldn’t be able to exact his punishment,” Qerim stated to close the segment. “So many people make poor decisions or get involved with the law and they don’t get to say, ‘hey, my shame’s enough.’ No, you face punishment in addition to that and that should happen here. He has a boss and that is Endeavor and I expect them to hand something down.”