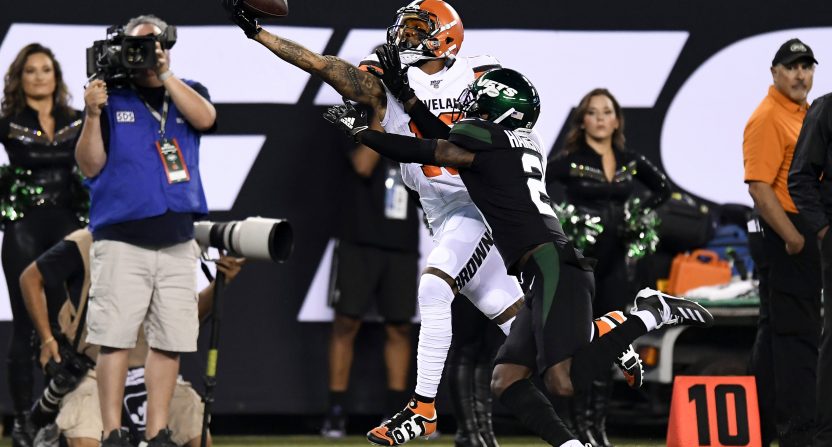 Monday Night Football is three for three this season. After both ends of the Week 1 doubleheader were up from last year, Week 2’s Browns-Jets matchup was also up from 2018, per ESPN. The game drew an 8.8 overnight rating, which was a 7% spike from last year. The pre and post-game shows were also up double digits, which is especially notable for Scott Van Pelt’s SportsCenter given that the game was a blowout and the biggest talking points from the game were “hey, the Jets suck and are down to their third QB” and “Odell Beckham Jr is pretty good at football”.

Will the good vibes continue into Week 3? Uh…maybe? TNF gets a Titans-Jaguars meeting that probably isn’t going to generate much national interest outside of the southeast. SNF’s Rams-Browns contest retained its luster with Cleveland’s win on Monday night. The MNF matchup is Bears-Redskins, and while neither team has looked incredible so far, at least neither has lost their starting quarterback or any other star player. During the Sunday daytime window, CBS gets their first doubleheader of the season with a now less interesting Saints-Seahawks game in the late slot, while the early window is highlighted by Ravens-Chiefs and the Cowboys and Patriots taking the Dolphins and Jets to the sword, respectively.

This will be a big week for the league, especially with all of the news and injuries from the weekend. If a Drew Brees-less Saints team can deliver a ratings increase for CBS, I think we can stop worrying about the NFL’s ratings.