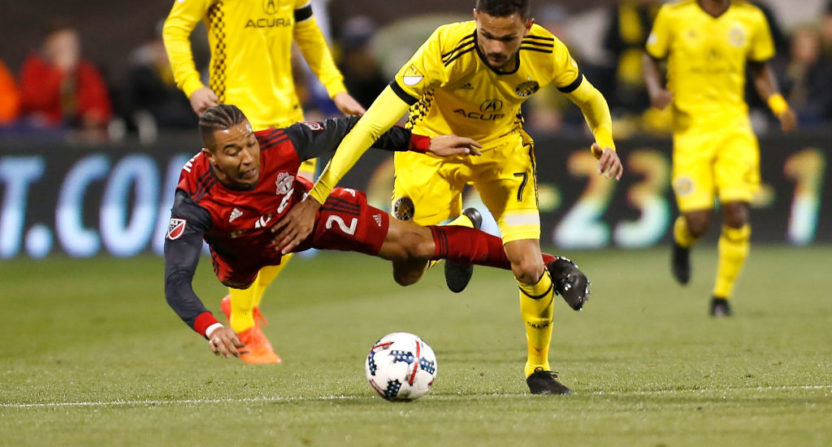 It’s hard to argue that 2017 has been the worst year for American soccer since the soccer boom started roughly a decade ago.

Of course the headliner is the failure of the USMNT to qualify for the World Cup next year in Russia in a shocking capitulation in CONCACAF qualifying. MLS has had to deal with the PR disaster that is the #SavetheCrew working against them. The league probably couldn’t have foreseen such a backlash to the threatened relocation of the Columbus Crew to Austin, Texas. And the storyline has dominated the headlines while the Crew have made a surprisingly deep run in the MLS Cup Playoffs.

I’ve always tried to stay positive and optimistic with MLS and its future on television. But right now the league is its own worst enemy. (You’ll forgive me if I’m a little bit biased in that assessment because the Crew are my hometown team, after all. Seeing the league actively trying to rip its own original franchise out of the heart of American soccer is disheartening to say the least. Don Garber and Anthony Precourt should vault to Public Enemy #1 and #1A in sports right now.)

While it’s not quite as visceral or emotional as #SavetheCrew, another area where MLS is shooting itself in the foot is in its playoff scheduling. The league has always been stuck in a sticky situation with their season culminating right at the climax of the college football regular season and the final quarter of the NFL season. That’s why the opening games in the conference finals series were played last night on a Tuesday night – one of the few nights during the week where there isn’t any real competition from the oval ball. With the exception of #MACtion, naturally.

Last night was perplexing, though. It was a strange situation where the Eastern and Western Conference Final games overlapped. Seattle-Houston actually began on FS1 before the Columbus-Toronto game ended on ESPN. The latter game started at 8 PM ET while the former began at 9:30 PM ET, meaning that fans wanting to watch both games basically had to sacrifice watching almost an entire half of one.

FS1’s Grant Wahl and Rob Stone let it be known how silly the situation truly is.

Why on earth is one MLS playoff game kicking off before the other one is finished?

Frustrating for ALL parties https://t.co/9SHJ0dehJu

Could you imagine the NFL doing this on Championship Sunday, starting the AFC Championship Game when the NFC game was in the 3rd quarter? For a league that is desperately trying to get every viewer and every ratings point they can, it’s mind-boggling. And it’s completely self-inflicted. Why not start the first game earlier or move the second game back? The Houston-Seattle game could have easily started at 10 PM ET and that way fans wouldn’t have to choose or miss any of the action.

And that’s not all. With ESPN airing the first leg of the Eastern Conference Final and FS1 the first leg of the west, you’d think that would continue to leg two. Not so fast, my friend. The two networks will flip flop broadcast assignments for the second leg next week where FS1 will broadcast Toronto-Columbus at 7:30 PM ET and ESPN will air Seattle-Houston at 10:30 PM ET. At least there won’t be an overlap next week.

This is supposed to be the most exciting time of the year for MLS, but they can’t get anything right with this television schedule. There’s no consistency in start times, calendar dates, broadcast assignments, or anything else. And none of this even touches on the absolute biggest issue facing the MLS Cup Playoffs – the fact that they’re played smack dab in the middle of an international break.

It was a whole sixteen days between the conference semifinals and conference finals, which is just about the most effective way to kill any momentum your league is trying to gain for the climax of its season. MLS Cup playoff ratings were up 80% from last year on ESPN before the international break, but it’s hard to see that keep up thanks to the league’s conference final scheduling.