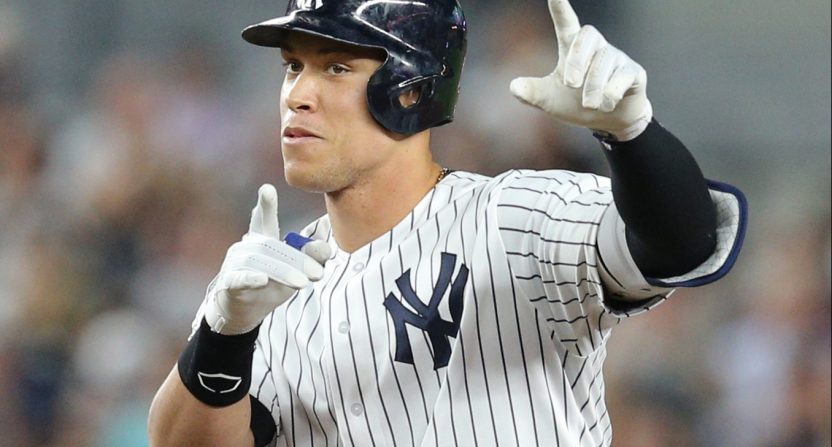 In a crowded marketplace, it’s naturally more and more difficult for any television entity to gain viewership as audiences become more and more diluted. In sports, this has been especially true for everyone from NASCAR to the NFL. (Although the NFL  is at least stemming the tide of consecutive seasons of ratings declines so far this year.)In truth, any gain in viewership should be treated as good news. And on that front, it’s been a pretty successful season for Major League Baseball. America’s Pastime saw a 2% increase in local television ratings across the country and MLB Network celebrated a season in which their daily lineup saw an uptick as well. Now, MLB has seen a similar ratings gain for their nationally televised games on ESPN.Via ESPN:

Major League Baseball game viewership on ESPN was up from 2017, according to Nielsen. ESPN finished the season with an average of 1,074,000 viewers across its 94-game telecasts, (including the full regular season slate and the National League Wild Card Game presented by Hankook Tire). The audience was up two percent from 1,048,000 viewers in 2017, according to Nielsen.Included in the overall average was ESPN’s Holiday Baseball package, which featured game slates on Memorial Day, Independence Day and Labor Day weekends. These games averaged 746,000 viewers, up 11 percent from 2017.Additionally, the two spring training games that aired on ESPN in March averaged 390,000 viewers, up 36 percent from last season.ESPN’s coverage of the 2018 MLB Postseason continues with every game available on ESPN Radio. Additionally, nightly editions of Baseball Tonight are returning this October.

MLB isn’t going to retake the spot of the NFL on top of the mountain in American sports culture anytime soon, but still this has to be somewhat encouraging for the sport. For years we’ve heard about nothing but doom and gloom when it came to baseball’s popularity. Even this year one of the biggest narratives was that not enough people cared about the game’s best player.And things should continue to get better for baseball in the postseason ratings-wise, especially with the Red Sox and Yankees looking like they could be locked in a classic Division Series. It’s not a complete turnaround, but it’s a start.[ESPN]