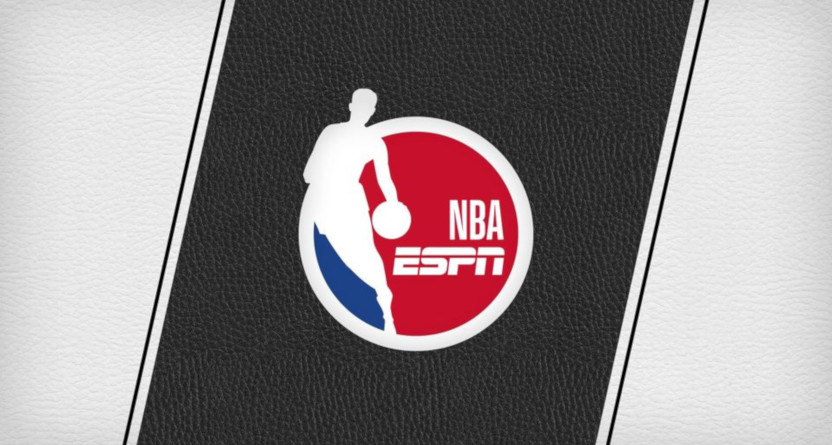 The 2020-21 NBA regular season is set to begin Dec. 23, but it’s going to be a very different season than normal thanks to the COVID-19 pandemic. And that has effects on national coverage from ESPN as well. ESPN and ABC will combine to televise 49 games in the first half of the season, including five games on Christmas Day, but those games are going to be presented a little differently than normal; while around half of them will feature on-site production trucks (and mostly on-site announcers), the other half will be done under the “enhanced world feed” (EWF) model, where ESPN takes in a feed from the home regional sports network broadcasting the game and adds its own announcers (mostly working from their homes), graphics, extra camera angles (from three specific dedicated cameras: a high “slash” angled camera, a mid-court camera, and either a reversal of the main camera or another one alongside it for tight shots) and more. ESPN’s Mike Shiffman (vice president, production) spoke to media on a conference call Wednesday about their plans for the broadcasts, and said the idea is to provide the best coverage possible while keeping their people as safe as possible and limiting the amount of required travel.

“As we’ve approached this with the league, health and safety has been number one. We continue to want to document these games to the standard that we believe we’ve set at ESPN. But given these unique times, health and safety is our top priority. And we’ve been fortunate to learn from our colleagues at ESPN with other sports.”

Of course, there are plenty of challenges for ESPN when it comes to not having their own trucks or announcers on site. Shiffman said while they’ve been pleased with what they’ve been able to do with remote broadcasts and the EWF model (which worked well in their first two preseason game broadcasts), there’s enough of an advantage from on-site announcers and trucks to pursue that when it makes sense (which may be when there are two national games in one city in a few days, or when there’s an extremely big national game).

“We start with health and safety first and foremost. But I think there are, and none of this is knocking what the home feeds can provide, because they’ve been terrific partners with us and our first two games have been, for a model we’ve never done, a terrific success. But we feel very confident in the people we have producing and directing games, and in the camera people. So when we’re able to, with advice from our health and safety group, produce some of our games, whether it’s games that are in the same city Wednesday-Friday or the biggest, most impactful games on our calendar, if we feel comfortable that we can do them in a healthy way and a safe way, the production will be at its best when we can travel people.”

Shiffman said one hurdle for remote announcers is that when they’re not in the same space, non-verbal communication gets harder.

“One of the challenges is natural human interaction. You can’t tap someone on the shoulder or make eye contact [as easily], those types of things.”

But he said they’re confident in the remote setup they’ve built, which gives play-by-play announcers and color commentators a lot of information and a lot of flexibility.

“The way it’s set up, and we’ve done this for other sports, is basically that it’s a Zoom call, a conference call where the main box would be the game feed and then your other boxes are obviously your analyst or your play-by-play partner, could be stats, you can sort of program it however you want. And then you can also augment that. We also provide a larger monitor which could just be the game feed; that way they don’t feel like they always have to be looking at boxes, they can look up at the big monitor and then look also at Zoom to see the analyst’s body language or hand signals, see the stats.”

“And then also in either those Zoom boxes or on a separate monitor can be other angles, like cameras pointed at the bench, say, so the play-by-play person has an idea if someone’s coming in as a sub, or if the coaches are having conversations, other things to try and fill some of the gaps from not being there and not having eyes on everything. …The general setup is the Zoom call and then other monitors, so we can as close as possible replicate the in-arena experience for them from a visual point of view.”

Shiffman said the hope is to have on-site announcers and sideline reporters for the games with ESPN’s own trucks, but that also may vary depending on the game and the announcers. And there may be some reporters in particular on site for EWF games.

“With the truck games, the current plans would be announce would be there. We are doing, for example, Friday night, it’s a truck game where Dave Pasch on play-by-play will be there in the arena in Phoenix and [color analyst] Jeff Van Gundy will be from his home. We’re taking opportunities to travel fewer people. So the plan would be truck game announce on site, but there will be instances where one or both of the announcers could be from home for truck games.”

“And it also gives us flexibility; the truck’s already on site, with the producer and director, but if for whatever reason we have to make a change, a game change because the game’s postponed and the new game came in its place, we’ve approached this as trying to be as flexible as possible. We don’t have reporters at every single game, but we can have a reporter at a game whether it’s an enhanced world feed or a truck game. We did it with Rachel Nichols on Sunday, where it was an enhanced world feed and the play-by-play and  analyst were at home, but Rachel was in Staples [Center].”

As ESPN NBA producer Tim Corrigan discussed with AA back in September, the NBA’s bubble last season saw ESPN using more production trucks than normal to spread its truck staffers out more for safety reasons. Shiffman said Wednesday that they’re planning to maintain low staffing levels for the trucks this season; they’re able to do that thanks partly to having graphics and some replays handled remotely from ESPN production centers in Bristol (CT) and Charlotte (NC), which they’ve done for four years now. Shiffman said that in addition to having similar or lower staffing levels for trucks, they’ve implemented safety precautions within the trucks.

“It will be similar or slightly less. We are doing graphics and some replay from remote locations. But also, we’re just getting more creative with our spaces. We have strict social distancing protocols and Plexiglass in the truck. I think it’s similar. But again, if we have to, whether it’s hire a bigger truck or a B-unit, a second truck, just to be able to have people be able to safely do their jobs, then that’s what we’ll do.”

That bubble also saw some unique camera angles like “RailCam,” which were possible thanks to the lack of fans at games. The fan status at NBA games this year will vary depending on the health restrictions in the areas where teams will play, but the likes of RailCam are still being considered, especially for games without fans. Shiffman said that all of that comes with considerations about the extra people required, though.

“We’re certainly aggressively pursuing what’s possible for this year. With something like RailCam where it is a human-operated camera, if we can do it, can we do it in a safe manner?”

Shiffman said there’s a lot of excitement at ESPN about the upcoming season, especially with the season’s start being so close to their traditional Christmas Day showcase (which will have three games on ABC with the on-site truck approach and two on ESPN with the EWF model).

“One of the things we’re very fortunate to have is just terrific resources, and the deepest selection of play-by-play folks and analysts and reporters and producers and directors and camerapeople and so on. It’s with great pride that we bring Christmas Day and the five NBA games each year. So I’d just say there’s a general excitement not just about the league and the sport returning, but also that it comes with Christmas Day at the heart of opening week.”

“We’re really excited for the Christmas Day schedule. We have the five games and the various storylines, whether it’s the return of Steph or the new-look Nets or Giannis fresh of the extension or Zion.”

And Shiffman said while there are challenges ahead, ESPN and the NBA have been able to work very well together so far to continue producing great game broadcasts despite the pandemic.

“One of the things about 2020, I’d say, the positive things, the silver linings, has been this incredible collaboration between us and the league. From starting with a virtual WNBA draft to obviously the bubble to a virtual lottery to a virtual draft, the word collaboration gets thrown around a lot, and this has been, I think, just a shining example of it. And we see it here in the effort both teams have made to launch this season in just a two short months after the Lakers were crowned champions.”