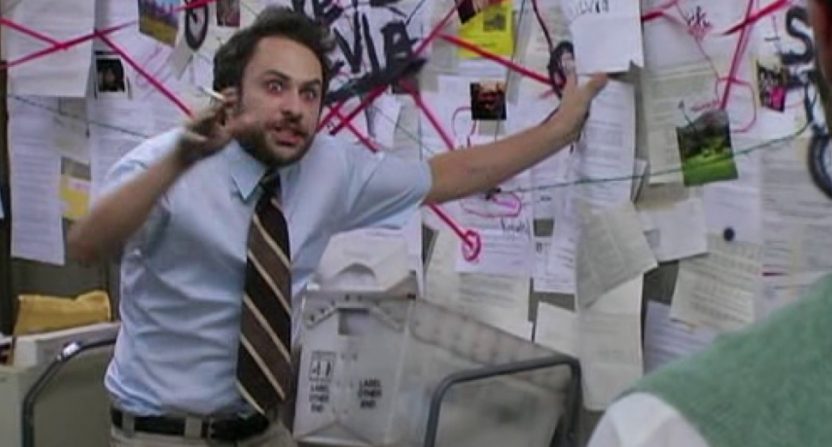 Friday saw one of the stranger theories ever floated on an ESPN platform, with Mike Golic Jr. using part of his daily appearance on Golic and Wingo (which, during his appearances, should be dubbed “Mike, Not Mike, and Mike Jr.”) to float an insane conspiracy theory.

His theory? The information about now-ex-Philadelphia 76ers’ GM Bryan Colangelo’s burner Twitter accounts (which Colangelo himself blames on his wife) was leaked to The Ringer’s Ben Detrick by…the NBA and commissioner Adam Silver, as a way to distract fans from the NBA Finals. Here’s the video in question:

Trey Wingo’s “Let me just say ahead of time, we apologize” is pretty great. Golic Jr. starts in on his full rant:

“The timing of this announcement seems a little fishy, right? In the middle of an NBA Finals sweep, the second time in three years that we’ve had the Cavs down 3-0 in a lopsided Finals that continues to remind people that the NBA has a result that you know is coming from the beginning of the season, that you can’t avoid. So what do you do? You try to distract from that by having this story get in there. Which happened because, going back to Sam Hinkie’s mysterious ousting, his middle of the night, sort of Jerry Maguire-esque manifesto that ends with his resignation as the Sixers’ GM, lands with the Colangelo family being inserted here not by any choice of the Sixers, but by Adam Silver and the league planting them there, knowing, understanding that’s a chess piece for them to move later on.”

“So we fast forward and now we’ve gotten to a point in time where LeBron James and this Cavaliers team can no longer be competitive with the Golden State Warriors, the only weapon formed against them that had any chance of prospering, and did it once, enough to give us hope that LeBron James can be the hero. Enter Adam Silver and company, who right now, hmm, you know what we still haven’t figured out in all this, who, count em, who was the “unnamed Twitter source” to tip off anyone in this process about the Twitter accounts that were disseminating this information? Who gave that information to The Ringer?”

“I posit that it was the league, that it was Adam Silver and company, who after planting the Colangelo family in here, decided that it was time and that they were ripe for harvest, cut them out of the equation, knowing that [former Cavs’ GM] David Griffin, also on the market at this point, would be the perfect piece to draw LeBron James into Philadelphia. Where The Process had taken hold after the careful work of none other than Sam Hinkie. Finally, The Process comes to fruition, as David Griffin takes his rightful place on the 76ers’ throne, brings LeBron James in and they rule the league for the next 10 years, going head to head with a Golden State Warriors team that finally has a worthy adversary.”

Wingo responds with “Let me just say this: no.” And then plays a banana peel sound effect: “That’s the Second Spectrum stat of conspiracy theories.” “I also have three words, and this is basically on you (pointing at Mike Golic Sr.), ‘Who hurt you? As a kid, that you came up with this?'”

While Golic Jr. may only be floating this half-seriously (in what now and forever is known as “The Stugotz“), it’s an insane take on a multitude of levels. Yes, there were reports that the league put pressure on the Sixers to part ways with Hinkie over concerns about the visibility of their tanking during “The Process,” and that there may have even been NBA pressure to hire first Jerry Colangelo as chairman of basketball operations and then Bryan as GM. But presuming that the NBA was aware of the Bryan Colangelo-associated burner accounts the whole time and only installed him to blow him up with leaks to The Ringer at this specific moment is ridiculous.

The league certainly shouldn’t be thrilled about any distraction from the Finals, regardless of the quality of these games, and they seem highly unlikely to love a story that makes a senior team executive look incredibly unprofessional and raises a whole lot of questions for players. And thinking that the NBA would install a GM in a member city just so they could get rid of him years later is bizarre, and sounds like someone’s been watching too much Game of Thrones or The Americans. (It even sounds like one of the potential theories the kids on American Vandal would construct, or like something watchers of Westworld come up with.)

Moreover, if the league actually wanted David Griffin and LeBron James to come to Philadelphia (something that’s debatable, given how Silver’s made plenty of negative comments about superteams), there would be a multitude of easier ways of doing that. Ones that didn’t leave them with the kind of negative story of these burner accounts. And it’s far from clear that LeBron is going to go to the Sixers, and it might have been easier to get him there without this kind of massive executive turmoil right before free agency.

And, if the league office did somehow figure out that there were these embarrassing burner accounts tied to Colangelo before anyone else did, it’s unlikely that they’d do nothing about it for years and allow them to build up damaging comments. Even if they figured this out only shortly before the story became public, it hardly seems that they’d go about spreading the news this way. They could have handled it all quietly with an internal investigation. Or, even if you presume that Golic’s crackpot theory that this distraction is actually good for them somehow is correct, it seems pretty, pretty unlikely that leaks to The Ringer would be any league exec’s preferred method of getting this out there.

All in all, this is an absolutely nutty theory, and it’s amazing that it not only aired on an ESPN platform, but was then  spotlighted on ESPN’s YouTube account. If they’re going for the “Worldwide Leader In Conspiracy Theories,” this is a pretty good start. Maybe next, someone should ask Golic Jr. how he feels about the shape of the earth or the moon landing.