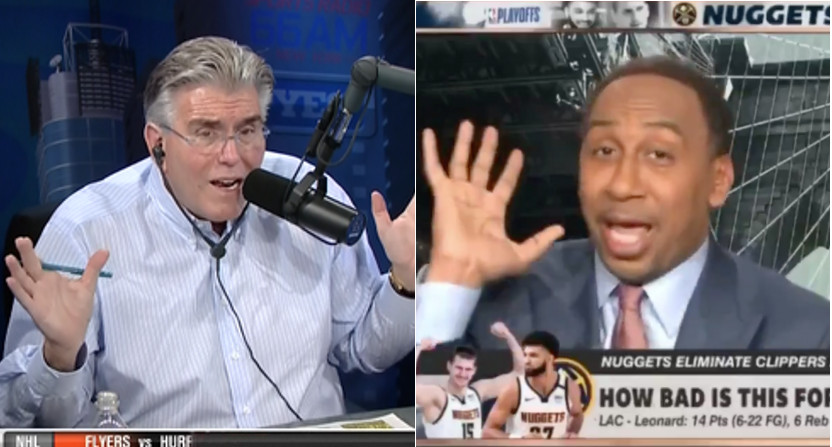 ESPN would like Mike Francesa to reunite with Chris “Mad Dog” Russo on Stephen A. Smith’s First Take. But for some reason, making it happen is a lot harder than it should be.

Russo has already enjoyed a career renaissance since joining First Take as a weekly contributor this year. In August, Smith divulged that he would love for Francesa to join them on his ESPN debate show. Earlier this week, Andrew Marchand of the New York Post reported ESPN sought to make the dream of a Mike and the Mad Dog reunion on First Take a reality, but has yet to pull it off.

On the latest episode of The Mike Francesa Podcast for BetRivers, the iconic sports radio host addressed the rumblings of his looming First Take appearance, confirming that the rumors of his conversations with ESPN are true.

“They called me last year and wanted me to surprise Dog and Stephen A. on First Take,” Francesa began. “I was a little leery of surprising anybody, I thought it was better if they knew about it. We were gonna decide on that, we hadn’t decided it yet. We went back and forth trying to find a date, we agreed on a date we were gonna do it, and I had a bad cold…so I passed on that day. I think it was in March, and said we’d get back to them. We never got back to each other again, and that’s where it’s stood.”

There you have it, Francesa comes clean and admits he doesn’t like surprises.

According to Francesa, a First Take appearance in the next couple of months remains possible, but nothing is on the calendar. The former WFAN host also said there were no plans to make him anything more than a one-time guest on First Take.

Russo’s deal with First Take also began as a one-time appearance, but eventually morphed into a weekly ordeal with Smith’s blessing. There’s just no way someone of Francesa’s ilk would be willing to sit there on a regular basis and get berated by Domonique Foxworth, JJ Redick or Ryan Clark the way Dog keeps going back for more.