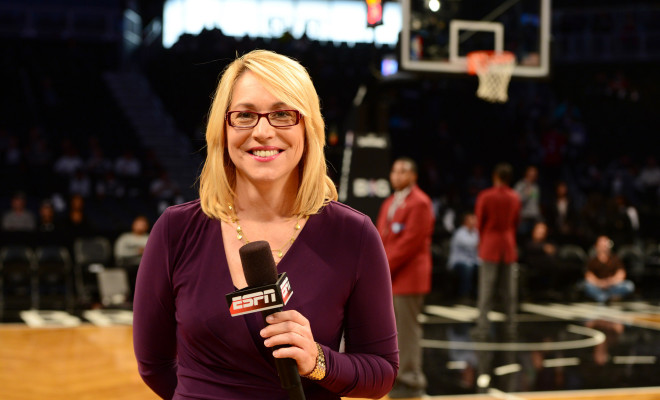 When ESPN announced last week that it had reached an extension with Doris Burke that would keep her in its NBA broadcast booth for years to come, our first thought was whether the beloved ESPN veteran could soon rise to the network’s top NBA analyst chair. Currently, Jeff Van Gundy and Mark Jackson call ESPN’s biggest games, including the NBA Finals, alongside play-by-play man Mike Breen, but given Burke’s talent and popularity, it was easy to wonder whether she would eventually find her way into that role.

Well according to Breen himself, Burke’s ascension is essentially inevitable. Here’s what the play-by-play man told Richard Deitsch on 590 Sportsnet in Toronto:

“The direct answer is yes,” Breen said. “Someday she will be. She is that good. I think right now I have two that I am working with who are a play-by-play man’s dream because every single telecast I do with them I laugh and I learn. They make me laugh because of their sense of humor and chemistry, and how much fun they have during the telecast. But they also just know the game so well and they know players’ personality so well. So I am hoping that they are going to be my partners for a long time.

“But Doris is one of the premier analysts in any sport and I have watched her from the beginning. I was the one who did the first NBA radiocast with her many years ago. I have watched her grow, and let me tell you everybody around the NBA — players and coaches — the respect factor is as good for her as any analyst around. She is an extraordinary talent who loves the game as much as anybody I have been around. She will be the lead analyst some day. I don’t know when. But whoever does get to work with her at some point whether it is me or someone else is going to be very fortunate.”

Breen obviously won’t join the movement to get Burke in the NBA Finals booth ASAP, since that would mean denigrating one of his current colleagues, but it seems to say a lot that he would so unequivocally vouch for her abilities in the analyst role.

After serving as a game analyst only occasionally in previous years while primarily working the sidelines, Burke was promoted to full-time analyst last fall. She called games this past season alongside Mark Jones before returning to her sideline role for the conference finals and NBA Finals. Many fans (including a majority in an Awful Announcing poll) have suggested she replace Jackson on ESPN’s top NBA broadcast team.

However, getting Burke in the NBA Finals booth might not be quite that easy. As our Ben Koo pointed out last week, ESPN is unlikely to simply discard Jackson.

And so Burke will have to keep waiting. She is 52-years-old and has said she wants to retire at 60, so she doesn’t have an abundance of time, but with the love of her audience and now Breen’s endorsement, her turn seems likely to come soon.