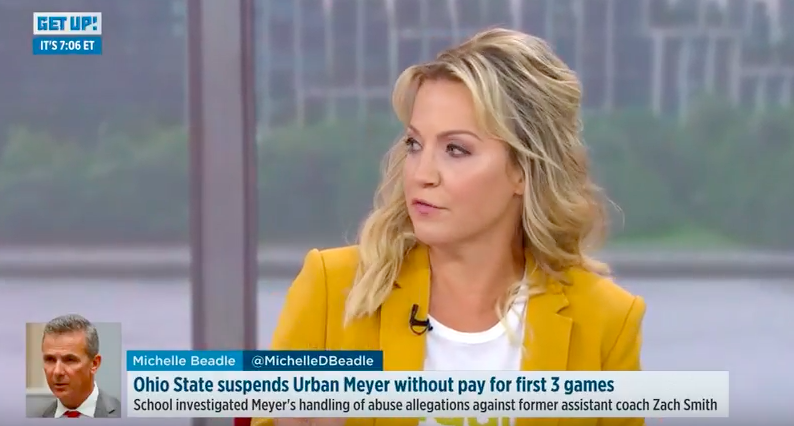 Ohio State and Urban Meyer have both faced severe backlash after the announcement of his three-game suspension for the coach’s role in the ongoing controversy surrounding domestic violence claims against former Buckeye wide receivers coach Zach Smith. Although Meyer was found to never have covered up Smith’s behavior, the university found in an investigation that both Meyer and Athletic Director Gene Smith could have done much more in their leadership roles.

While the punishment itself was too lenient for many, what drew perhaps even more widespread condemnation was the press conference held by the central figures afterwards. Specifically, when Urban Meyer was asked about what message he would share with Courtney Smith, he refused to say her name and instead offered more brazen, generic coach speak. After the OSU investigation found that Meyer didn’t tell the truth at Big Ten Media Day (although somehow judging it was unintentional) the coach had another chance to offer a mea culpa in front of a microphone and show some true remorse and perspective. He failed miserably.

While many analysts have offered strong condemnations of Meyer and Ohio State, perhaps the strongest came from ESPN’s Michelle Beadle. She said that she was so fed up with the NCAA and NFL’s response to controversies like these that she was boycotting both this year. (The irony of ESPN’s YouTube video is that their posting of Beadle’s comments make no mention of her in the title and instead focus on Jalen Rose’s take.)

Here is a partial transcript of Beadle’s comments via USA Today:

“Number 1 — 2018 will go down for me as the year we just decided we’re just not gonna use the word ‘lie’ anymore. And we’re gonna call it all kinds of other things. He lied. He didn’t misrepresent the facts. He wasn’t less than accurate. You lied and you can just call it lying. Why we’ve decided as media and a society to just kind of walk around that so very softly — you’re a liar. You lied. Period. Done.

“That being said, there’s a reason why this will be the second season I don’t watch NFL and I don’t spend my Saturdays watching college football either. I believe that the sport of football has set itself up to be in a position where it shows itself in the bigger picture to not really care about women — they don’t really care about people of color, but we won’t get into that for NFL either. But as a woman, I feel like a person who has been marginalized. And every single one of these stories that comes out, every single time, pushes me further and further away. I realize that they don’t care, but for me, it’s opened up my weekends. I appreciate you for giving that to me. I don’t care anymore.

It’s not the first time that Beadle has spoken out strongly against a sport or subject that she covers or is associated with. A few years ago, Beadle said she would stop being a WWE fan after the organization’s support of Floyd Mayweather. Beadle then “buried the hatchet” with Stephanie McMahon and Triple H several months later.

The timing of Beadle’s comments are also striking given that her own show, Get Up, has just revealed that an NFL and college football analyst will join the program on a regular rotating basis throughout the fall. If one of the hosts is effectively boycotting the sport of football, it could make for some interesting conversations and debates throughout football season.

Most importantly, though, it’s hard to argue with Beadle’s frustrations and feelings regarding the sport of football and how it has consistently marginalized individuals. Whether it’s how the anthem kneeling debate has been twisted into a football or how both the NFL and NCAA have routinely botched taking domestic violence issues seriously, it seems like the sport (both college and pro) is in a perpetual state of scandal and pushing fans away.

Especially when it comes to women, and Ohio State’s press conference last night, it should have been easy for someone in a position of power to mandate a donation to a worthy cause or at the very least, talk about how the university would institute new practices to make sure an episode like this doesn’t happen again. Instead, Ohio State and Urban Meyer somehow did less than seemingly the bare minimum. Given it’s just another in a long line of controversies and disappointments, it’s understandable why more and more people are getting fed up with the sport.