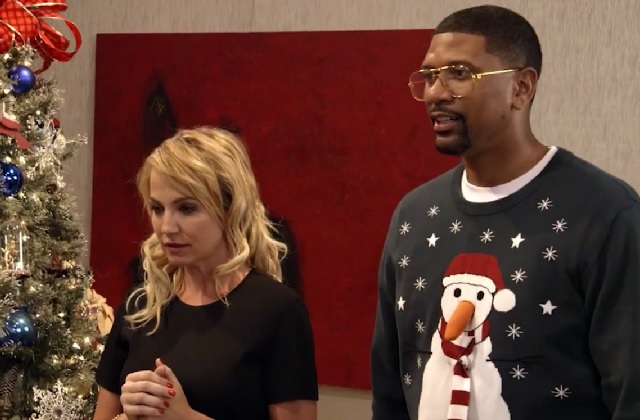 One of the biggest questions surrounding ESPN programming in recent months concerned Mike Greenberg’s new morning show and who would co-host the program with him. Personalities such as Sage Steele and Charissa Thompson were among those who had been mentioned as possibilities, but both opted for other, more prominent roles. Someone else rumored as a Greenberg co-host was Michelle Beadle, and it turns out that’s the direction ESPN is going with.

According to The Hollywood Reporter‘s Marisa Guthrie, ESPN has tabbed Beadle and her NBA Countdown co-host Jalen Rose to be a part of the new morning show with Greenberg. Beadle and Rose will relocate from Los Angeles to New York for the new show, which will broadcast from a studio in lower Manhattan. Both will continue in their roles with the NBA studio pregame and halftime program. Additionally, Rose will remain on ESPN Radio, co-hosting Jalen & Jacoby with David Jacoby, which airs Monday through Friday from 7 p.m. to 9 p.m ET.

However, Guthrie did include an ominous “for now” when referring to Beadle and Rose staying on NBA Countdown. That would appear to imply that changes are inevitable, despite Beadle being promoted to full-time host of the show earlier this year. Having Beadle and Rose do NBA Countdown in the evening, then turning around for the very early wake-up that morning TV requires doesn’t seem sustainable long-term. (The same applies to Rose’s ESPN Radio responsibilities.) Yet NBA Countdown airs Wednesdays and Fridays, so that brutal turnaround would only take place once a week — at least during the regular season.

Presumably, Beadle would no longer be a co-host of SportsNation. Hosting a daily morning show and afternoon program would be asking a whole lot of Beadle, unless she doesn’t need any sleep.

There would appear to be quite a few puzzle pieces to move around in light of this reported move. Who will replace Beadle on SportsNation and, presumably, NBA Countdown? Could Rachel Nichols jump from The Jump to ESPN’s flagship NBA studio show? Will Jalen & Jacoby continue? With more to surely come, perhaps that’s why ESPN hasn’t yet officially announced the move.

Giving Greenberg his own show and breaking up the longtime Mike & Mike pairing with Mike Golic had been rumored for approximately a year, and reports of the decision being officially made broke in January. Eventually, Greenberg and the network announced he would be leaving Mike & Mike in November (Nov. 17. to be exact) amid rumors that he and Golic were no longer getting along. (Golic will pair up with Trey Wingo for ESPN Radio’s new morning show beginning Nov. 27.)

Partnering Greenberg up with Beadle and Rose should create a intriguing mix with a variety of voices that makes ESPN’s new morning show more compelling than a Mike & Mike program that had become increasingly bland over the years. If the network envisions a show like MSNBC’s Morning Joe that combines entertaining banter with thoughtful discussion and pointed commentary, a program that helps set the day’s discussion in sports, adding outspoken, entertaining personalities like Beadle and Rose — who already have established chemistry together — with Greenberg as a “straight man” appears to be a good decision.

Originally, ESPN announced that Greenberg’s morning show would premiere on Jan. 1, 2018, but the THR report says that the program is now set for a spring 2018 debut.