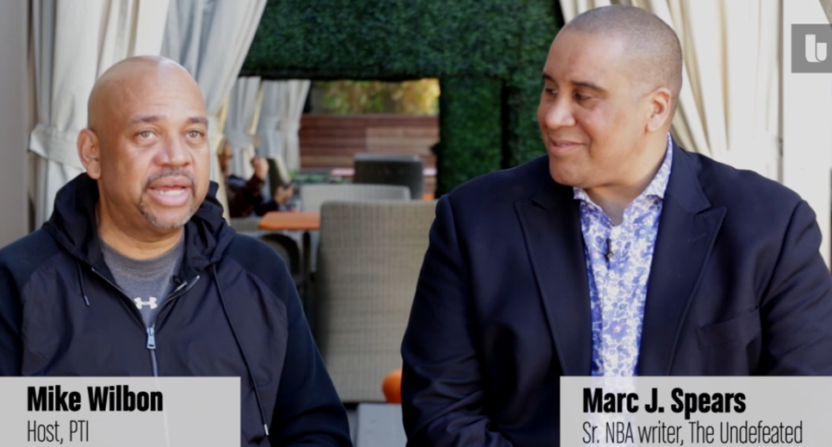 Fox News host Laura Ingraham started a massive controversy Thursday night with her on-air comments criticizing LeBron James and Kevin Durant’s political commentary in an Uninterrupted podcast with Cari Champion, asking “must they run their mouths like that?” and telling James to “shut up and dribble.”

Those remarks from Ingraham quickly drew backlash from other athletes like Dwyane Wade and Chris Long, and James himself responded both on social media and then in an All-Star Weekend press conference.

Now, the controversy’s taken on an interesting media-on-media dimension, with ESPN’s Michael Wilbon and Marc J. Spears going hard after Ingraham in a five-minute video conversation for ESPN’s The Undefeated from All-Star Weekend:

Update: Ingraham has since responded to this with a statement issued through Fox News PR:

“In 2003, I wrote a New York Times bestseller called ‘Shut Up & Sing,’ in which I criticized celebrities like the Dixie Chicks & Barbra Streisand who were trashing then-President George W. Bush. I have used a variation of that title for more than 15 years to respond to performers who sound off on politics. I’ve told Robert DeNiro to ‘Shut Up & Act,’ Jimmy Kimmel to ‘Shut Up & Make Us Laugh,’ and just this week told the San Antonio Spurs’ Gregg Popovich to ‘Shut up & Coach.’ If pro athletes and entertainers want to freelance as political pundits, then they should not be surprised when they’re called out for insulting politicians. There was no racial intent in my remarks – false, defamatory charges of racism are a transparent attempt to immunize entertainment and sports elites from scrutiny and criticism. Additionally, we stated on my show that these comments came from an ESPN podcast, which was not the case – the content was unaffiliated with ESPN.”

The original post follows. Here are some of the most notable comments from Wilbon and Spears:

Spears (0:50): “While it may be veiled as something else to her, I took it as kind of a racist kind of thing to say. And also something that, ‘Hey, it’s All-Star Weekend, we know a lot of attention’s going to be placed here, why not bring some of that attention my way?’ And it’s unfortunate that someone would stoop that low to get some attention.”

Wilbon: “It’s thinly veiled. It’s very thinly veiled. And all of these people, all of these uberconservatives, and I don’t care if people at Fox News are offended, that’s not all they have but that’s a large part of the roster, who then step forward and say ‘I’m not a racist!’ Well, whoever says “I am a racist”? Whoever says “I said something bigoted”? What she said, it was insulting, it was disrespectful. Who the hell is she? She’s so smart she’s going to tell people what they should comment on?”

“‘Shut up and dribble?’ I realize she was playing off the title of something, whether it’s a book, lecture or whatever, but ‘Shut up and dribble’? You take yourself that seriously? You’re that smart? It’s interesting that all these uberconservatives talk about what stable geniuses they are, but they sound like morons when they try and dictate to other people what they should talk about, what they’re smart enough to talk about.”

“She comes off like a bigot. I don’t know her, I don’t know her work, I turn off Fox as frantically as I can, it’s not allowed in my house, that news, cable news network, because of things like this. And Bradley Beal, we’re here at All-Star Weekend, which has really turned to this discussion, because people are angry. I’m angry. It’s angering! It’s insulting when you say that people, what did she say, people who look like this? People who grew up a certain way? What is she saying? What she’s saying is…”

Wilbon: “They. ‘Those people.’ But they don’t want to own it. They’re scared to own it. Bradley Beal, an All-Star, a Washington Wizard, who we like to talk to about things like this…”

Spears: “Who has definitely said some things that haven’t gotten the spotlight they deserved.”

Wilbon: “That’s right, because he’s a smart guy with diverse interests that I guess Miss Laura would say should just shut up and stick to basketball. He said, ‘You know what? LeBron has a huge voice, he is a powerful man in this culture, in fact he has probably a greater impact on this society than she does.’ And maybe she doesn’t want that. Maybe she doesn’t think that somebody who is black or brown, who is not as formally educated as she is, should be able to comment on these things or have influence. Maybe that’s the resentment. And that’s what angers me. Who the hell is she to decide what people can talk about?”

Spears: “And the ignorance comes from not knowing your subject. It’s easy for DACA to do things to kids you’ve never met. It’s easy to talk bad about black folks that you haven’t been around. And it’s also “unintelligible” to talk about an athlete who’s changed the world in a lot of ways.”

Wilbon: “Who you think just dribbles.”

Spears: “Yeah. If you want to talk about him as a ballplayer, I’m sure he’s fine with that. I think it’s ‘unintelligible’ to question anything about his intelligence, what he’s done in the world, just the impact that he’s made, not only as a humanitarian but in the entertainment world. Despite not going to college, it’s amazing what he’s done to put his buddies in positions of power; it’s one of the great stories of the ‘hood, so to speak, to rise from nothing to be the King James that he is. So I think maybe she should go spend some time in his shoes instead of having him go on the air with her.”

This is interesting given the ways that ESPN has tried to stay out of politics in the past and given that you wouldn’t normally see employees of a sports network opining on the host of a cable news network show this way, but there’s a case for how this was handled. For one thing, this response from Wilbon and Spears is under The Undefeated’s banner, where talking about race, cultural and political issues around sports is expected, and it would raise many more questions if that site wasn’t covering this given how directly it relates to sports (and, as they mention, how it’s dominated much of the All-Star Weekend talk).

For another thing, it’s notable that they sat down for a five-minute in-depth video discussion of this that was then featured on The Undefeated. That maybe gave them the chance to make their points with greater nuance and detail than if they’d only been able to talk about it on social media, and it also perhaps gave their response a bigger . It’s unusual to see ESPN personalities talking about Fox News personalities, but Ingraham certainly opened the door with her comments on James, and The Undefeated definitely seems like a logical place to address this.

In fact, Wilbon tweeted about being grateful for that platform afterwards:

I'm sure Laura Ingraham, if she knew who we were, would tell @MarcJSpearsESPN and me to shut up. Like LeBron, we won't. And like LeBron we find her comments as ignorant as they are insulting. And so thankfully we have @TheUndefeated on which to respond. https://t.co/TugV9bgkWg

We’ll see if this spurs any further fallout.