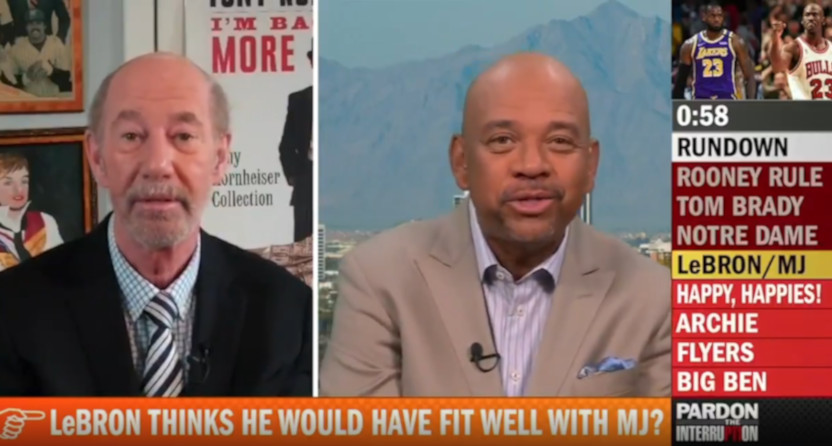 Pardon The Interruption co-host Michael Wilbon has come under discussion here for spicy takes before, from yelling at a DC CBS affiliate for interrupting a Masters replay with a tornado warning to a “Get the hell out. Get out of America” rant against Jurgen Klinsmann to a “mother’s basement” rant (in 2015, no less!) to calling metrics “garbage” and claiming “I value winning the damn game more than the ERA!” He’s in the news again, this time for getting dunked on by a broad swathe of media Tuesday. The dunkings came thanks to a Wilbon tweet defending Scottie Pippen (a fine premise in its own right) by citing…how he has more championship rings than LeBron James (a not-so-fine execution of the premise). Wilbon eventually deleted the tweet, but it’s preserved here:

Wilbon showing some love to @ScottiePippen. I wish he didn’t delete this… pic.twitter.com/6l4rzDMBu6

And yes, Wilbon made this argument on air in exactly those words in the linked video:

Would LeBron have played better with MJ than Scottie Pippen? pic.twitter.com/9IJ56RPOwJ

Wilbon says (around the 0:40 mark) “I’m tired of everyone taking shots at Scottie Pippen, cause last I checked he’s got twice as many rings as LeBron.” Tony Kornheiser responds “It’s me, it’s just me” (taking shots), but Wilbon then says “No, apparently not, because you quoted LeBron, and if that was a shot, I would just say one guy has twice as many rings as the other guy. I would just point that out.”

This is incredible logic, as by it, we can establish a definitive ranking of how many LeBrons players are worth based solely on their championships won as players. Bill Russell? 3.67 LeBrons. Sam Jones? 3.33. John Havlicek, Tommy Heinsohn, K.C. Jones and Tom Sanders? 2.67 LeBrons each. (And Heinsohn really shoots into the stratosphere if he gets credit for championships as an announcer.) “Count the RINGGZZZZZ” arguments are generally reductive and stupid when they come to individuals, as they give individuals credit for a team accomplishment (and ignore the roles that teams and luck play in titles), but this one is particularly stupid, especially as Pippen was the second option on his title teams and LeBron was the top option on his. And this is why Wilbon isn’t going into individual stats in his Pippen/LeBron discussion, as LeBron would win most of those comparisons handily.

Does that mean that LeBron would have been an even more successful pairing with Jordan than Pippen? Not necessarily, especially given the many, many accounts of Jordan not getting along well with particular teammates (and given the complaints some former teammates still have about him). You can make an argument that Pippen was the perfect fit to be the second banana with Jordan and that anyone else wouldn’t have worked as well. And it’s also worth discussing the roles of other excellent complementary Bulls players like Dennis Rodman, who were happy to dominate in roles that didn’t see them taking a lot of shots.

Throwing LeBron on the 90s Bulls could produce even better results given his individual skills, or it could produce worse results if he and Jordan clashed. Arguments can be made for both sides, but they’re all hypothetical considering how time travel, you know, doesn’t exist. But “Pippen won more rings than LeBron, so he’s better” is a ludicrous argument, especially considering that other former Bulls like Rodman, Ron Harper, Steve Kerr (all with five total rings between the Bulls and other teams), Horace Grant, Robert Parish, Will Perdue, and John Salley (all with four between the Bulls and other steams) all are “better than LeBron” under this criteria. And there are plenty of other funny ways to dunk on this argument using examples from both basketball and other sports, as some media members illustrated Tuesday:

Robert Horry has more rings than MJ or Kareem https://t.co/T8xWj04902

So yeah, this wasn’t the greatest argument we’ve ever seen from Wilbon, either on air or on Twitter.