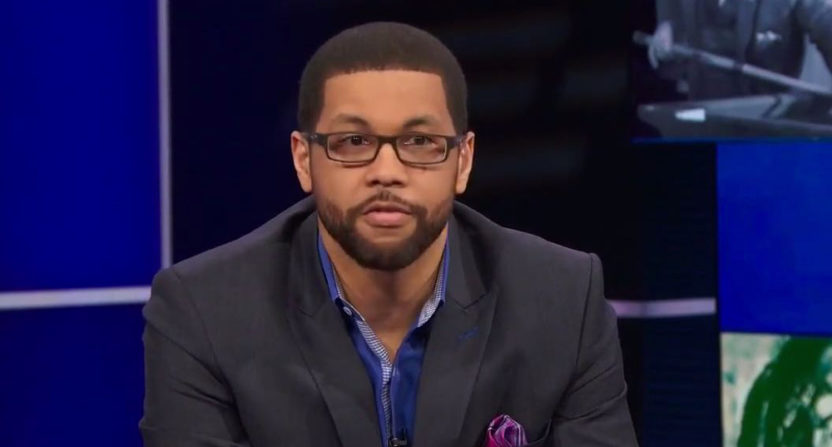 A big question in the wake of the two-week suspension ESPN handed down Monday for SC6 co-host Jemele Hill was what would happen to the show without her. After White House press secretary Sarah Huckabee Sanders criticized Hill in September, ESPN reportedly wanted to pull Hill off the air that day, but co-host Michael Smith refused to do the show without her, and other black hosts declined to fill in, leading to Hill and Smith doing their show as normal.

This time around, it came out Monday that Smith and ESPN reached a “mutual decision” that he’d sit out that day and return Tuesday, but the plans for the show in Hill’s absence weren’t clear at that point. Awful Announcing has now learned from a ESPN source that the current plan is for Smith to host SC6 solo Tuesday and for the rest of Hill’s suspension.

This is a fluid situation, and things could still change. But the plan for the time being is for Smith to fly solo in Hill’s absence, and that probably makes sense for all involved. Any replacement under these circumstances would take a lot of flak for sitting in Hill’s spot, especially with her suspension proving so controversial (and she’s already received plenty of supportive comments from ESPN personalities and others), and it’s quite possible that ESPN talent might again decline to fill in for her.

Having Smith do the show solo means there’s no direct replacement for Hill, and also means that SC6 doesn’t just go away for those two weeks or get converted into a more-standard version of SportsCenter, rather than the unique interview- and pop-culture heavy show it’s become. It’s also notable that Hill tweeted her support for Smith Tuesday:

I love you @michaelsmith for being my biggest supporter, a great friend, terrific husband & father. I truly don't deserve you. See you soon.

We’ll see how this goes for Smith. It’s not going to be possible to replicate the banter-heavy, back-and-forth elements of the show without a cohost, but any cohost other than Hill probably would have made things very awkward. And they may be able to keep the interview-heavy aspects of SC6, and perhaps bump those up even more to fill time that normally would have been occupied by discussion between the cohosts. SC6 has had plenty of notable player guests, and ESPN also has plenty of analysts who presumably can stop by.

But it is going to be a very different show with just Smith hosting rather than Smith and Hill, and it will be worth watching to see how that plays out. In any case, though, this is at least worth a try, and seems like possibly a better outcome for Smith, Hill and ESPN than directly replacing Hill during this suspension or pulling SC6 altogether.