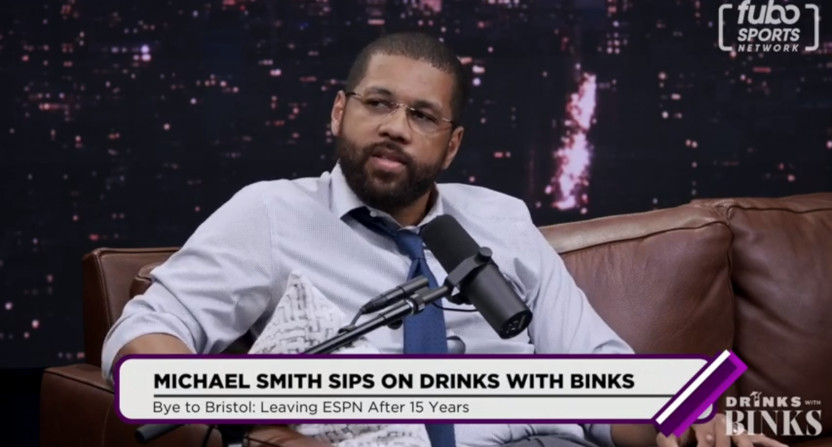 Much of the discussion around ESPN’s old SC6 (which launched in February 2017 and ran through March 2018) was about co-host Jemele Hill, especially around her September 2017 tweets that President Donald Trump was “a white supremacist who has largely surrounded himself w/ other white supremacists,” “an unfit, bigoted, incompetent moron,” and more. Those tweets drew White House condemnation and ESPN disavowal, and while they didn’t directly lead to a suspension, Hill was later suspended for other tweets, left SC6 in January 2018 to join The Undefeated, and left ESPN altogether last October (after a buyout of the rest of her contract) to join The Atlantic. But what happened to Smith’s co-host Michael Smith is just as interesting and has received less coverage. We got some more details on that this week thanks to Smith appearing on fubo Sports Network’s Drinks with Binks to talk with host Julie Stewart-Binks.

It’s notable that Smith wasn’t directly involved in the Hill Twitter conflict, but it still had major impacts on him. He sat out the immediate SC6 after Hill’s suspension (in a “mutual” decision with ESPN), he hosted the show solo for the two weeks she was gone, and he continued on with SC6 for a month and a half after Hill left. Then, after that show was cancelled in favor of a more-standard SportsCenter, he wound up without a prominent front-facing ESPN role; he’d occasionally show up on shows like Highly Questionable, but his ESPN profile appeared to have taken a big hit.

And comments from the likes of Disney CEO Bob Iger about ESPN coverage that had “swung a little bit too far away from the field” and ESPN EVP Norby Williamson (more prominent under new ESPN president Jimmy Pitaro, and heavily involved in shifting SportsCenter to a show less focused on personality and more focused on straight news and highlights) made it seem like Smith wasn’t what they wanted. In particular, Williamson criticized SC6 to AA in March 2018, saying “When we went with the Six we didn’t really do our due diligence there. I think it got away from us a bit with Michael and Jemele, Michael and Jemele, Michael and Jemele.”

So it wasn’t that surprising that Smith eventually wound up leaving ESPN earlier this month following a contract buyout, a year and a half after his show was taken away and a year and three months before the February 2021 expiration of his contract. His exit also saw him named as executive vice president and chief content officer of Hollywood-based startup (co)laboratory, and it’s in that new role that he spoke to Stewart-Binks this week. But some of Smith’s most notable comments there were about what happened at ESPN, in particular with his remarks on the saga around Hill’s “white supremacist who has largely surrounded himself w/ other white supremacists” tweet and how that affected him:

.@michaelsmith discusses the tweet that signaled the beginning of the end of @jemelehill's time @espn

“I always thought that people focused way more on the act of the tweet itself than the sentiment and the factual basis of the tweet. It’s like, ‘Well, are we going to talk about the fact that it’s true? Or are we just going to focus on the fact that it was tweeted?” So she tweeted that water is wet, are we pissed that somebody says water is wet? So, you know.”

“But for me, it was a tough spot from the standpoint of well, we have a shared sensibility, and she is my partner, but I had a job to do, a family to support, a contract to honor. And even though she had kind of emotionally and then eventually literally moved on from the show, I was still trying to press forward and continue doing the show to the best of my ability. Up until March 9, 2018, until they told me I wasn’t doing it, I was doing the best SportsCenter I could. When the writing was on the wall, Twitter, Instagram, whatever, I was like, I’m going to do this show until they tell me I’m not.”

There’s more from Smith in a longer clip here, including his comparison of his ESPN exit (after 15 years there) to a bad relationship at 1:40, where he says it worked out for both sides:

“I’m glad it ended the way it did, awkwardly, uncomfortably, painfully at times, because much like with a relationship, sometimes they’ve got to break up with you. And it’s the best thing that ever happened to you, but you wouldn’t have walked away just based off the devil-you-know familiarity, comfort, history, you stay together for the kids, you got a house in each others’ names, whatever, right? Likewise, sometimes somebody got to dog you, they got to cheat on you, shit’s got to go bad for you to leave, and then you get to the next person and you’re like ‘Oh my god, I’m so glad I got out of that relationship because even though there were some good things in that relationship, now I’m in a better place that I would not have been.'”

“The last thing John Skipper told me before he left, he said, ‘Michael, you could be the Kobe Bryant of this place, you could spend your entire career here.’ Because again, I got there when I was 25, so I had grown up there. And I think if not for the way it ended, I really believe there was a subconscious level of complacency that had set in, the platform, the status, the salary, the security, we love our house and our neighborhood in Connecticut. I wouldn’t have left for a startup, I’d never have been inclined to meet Jaymee [Messler, the co-founder of The Players’ Tribune who’s a partner at (co)laboratory] and discuss the startup with her, I probably would have been at the [ESPN] 50-year celebration.”

It’s certainly interesting to hear Smith open up about his departure from ESPN and his thoughts on the Hill tweet and its aftereffects this way. And while the path to this point was tough for him, it seems like he’s happy with where he’s ended up.

Drinks with Binks airs Fridays at 8 p.m. ET/PT on fubosportsnetwork.com and their various distribution options. Previous notable interviews there include ones with Adnan Virk and Grant Wahl.