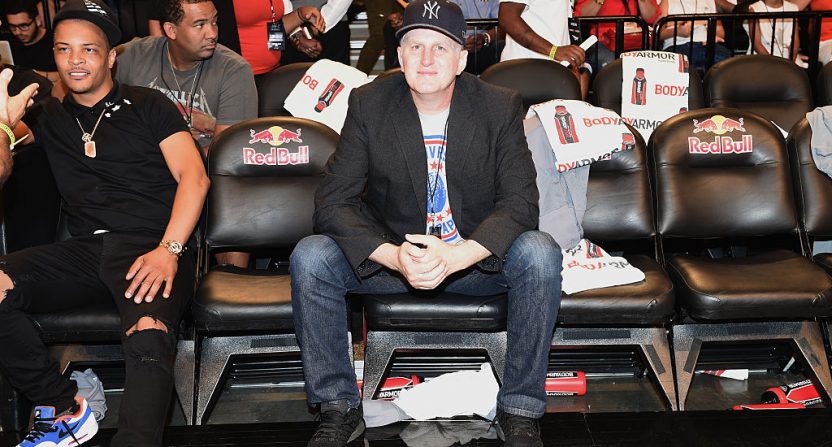 Rapaport initially criticized Le Batard’s comments on Twitter and said that Le Batard’s father isn’t qualified to be on his show. Le Batard producer Mike Ryan then started blasting Rapaport’s acting career, Rapaport shot back, fellow Le Batard producer Roy Bellamy got involved, and Rapaport then tweeted him what looks like a racist caricature. (There’s a recap of the Twitter feud here from Slice Miami, but note that it comes with a very pro-Le Batard slant.)

Le Batard then went in further on Rapaport himself on Monday, saying he “really loves black people” and “seems like he wants to be black,” and predicting Rapaport (who’s contributed to ESPN’s The Jump and other programs as a guest, and directed the 30 For 30 “When The Garden Was Eden”) was “done” at ESPN. This then went to a whole new level Tuesday when Rapaport spent all 42 minutes of the latest episode of his I Am Rapaport podcast bashing Le Batard, even calling him a “twinkie-eating f— boy”. Here’s the full file:

Rapaport then spoke to The Wrap’s Brian Flood about why he did this, saying it was particularly in response to Ryan’s claim that he had had herpes and that he’d contemplated further legal action:

“In the picture, it looks like I got like a cut, infection or if you wanna pop sh–, a herpe,” Rapaport said on his Tuesday podcast before explaining it was actually an infected lesion that gave the actor a skin cancer scare. “And then I got a letter from my lawyer… If this guy is saying that you have herpes, that’s defamation.”

…“I feel bad about the whole incident,” Rapaport told TheWrap on Wednesday. “But I was under attack and being publicly defamed, so I needed to respond. I wish it never got this far.”

But he also had plenty to say about Le Batard, his producers, and their other comments:

Rapaport repeatedly referred to Le Batard as the “Cupcake Kid” on his Tuesday podcast, adding, “Get the f— out of here, you fat f—.”

“You’re claiming that I’m not going to work at ESPN? Let me tell you something, if I’m going down, the whole sh–‘s burning down. If I’m going down, we’re talking defamation case,” Rapaport said. “These guys laughing and giggling like they’re going to end my career… If I sh– my pants and dropped dead. That sh– in my pants, on my dead body would be more relevant than anything you did in your whole life.”

This is maybe the most remarkable media feud in some time. It’s noteworthy that the vast majority of Rapaport’s podcast episodes (he’s put out 269 now) are him interviewing someone else; Le Batard and his producers got under Rapaport’s skin enough to compel him to spend a whole 42 minutes attacking them. And while the threats of legal action are common, attorneys Flood spoke to think Rapaport might have a case for defamation, especially over the herpes claim. But the other incredible element of this is that these are two ESPN-associated personalities not just disagreeing, but going at each other in incredibly graphic and personal terms. It makes the days when the network suspended Bill Simmons from Twitter for three days for criticizing First Take seem downright tame in retrospect.

We’ll see if there are any further implications from this feud, either in the realm of litigation or in ESPN discipline for any of the parties. But this is certainly something. Foul-mouthed feuds aren’t new to Rapaport, of course (consider this 2014 one with Spike Lee), and he’s played plenty of villains and tough guys (including Daryl Crowe Jr. on Justified), but it’s new to see him in a full-out war with a ESPN personality. Who will emerge victorious?