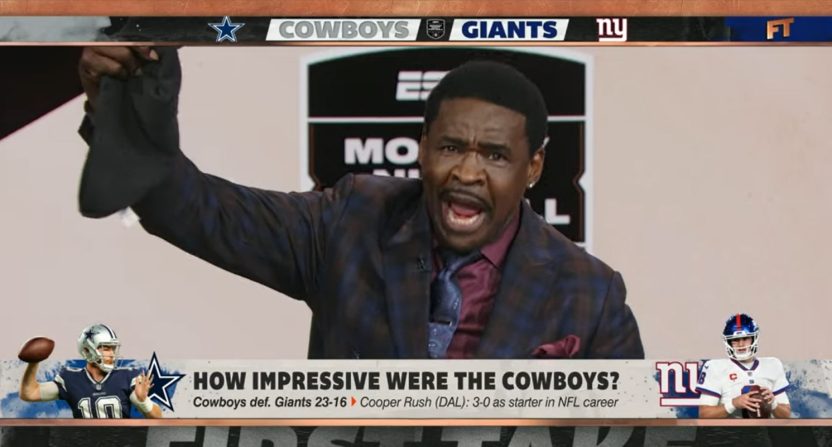 The only time you can expect Stephen A. Smith to look and sound like the more measured person on First Take is when Michael Irvin joins the show.

Irvin’s passion for the Dallas Cowboys is unmeasured. But the moment he started quoting the Bible, we knew his Tuesday segment on First Take was going to be different.

Someone get Michael Irvin a towel pic.twitter.com/JVbeJ8ei48

“Maybe I’ve overextended my welcome, I may not ever be back again!” Irvin admitted after he feverishly celebrated the Cowboys’ Monday Night Football win over the New York Giants. The Hall-of-Famer proceeded to get up from his chair and take a deep breath in an attempt to regain composure after forcing Smith (a notorious Cowboys hater) to sit through his celebration.

Eventually, someone from First Take’s production staff arrived with a massive roll of paper towels for the former Cowboys wide receiver. Unfortunately, it wasn’t Viva Cloth Paper Towels or even a mid-level brand like Bounty. Apparently, ESPN provides their employees with that useless bleached Kraft paper, the kind we grew up using in the school cafeteria that doesn’t actually absorb liquid, it just pushes it around. Irvin, however, intelligently called for a real towel, surely aware that using the Kraft paper would have felt like rubbing his face with a fine grade of sandpaper.

Although not quite as drippy as the 2018 Texas incident Smith referred to, where Irvin appeared as though he was on the verge of a heart attack, the Hall-of-Famer was still on another level Tuesday morning. And hopefully, ESPN has the foresight to stock their studio with a better brand of paper towel, at least on the days where Irvin is working.