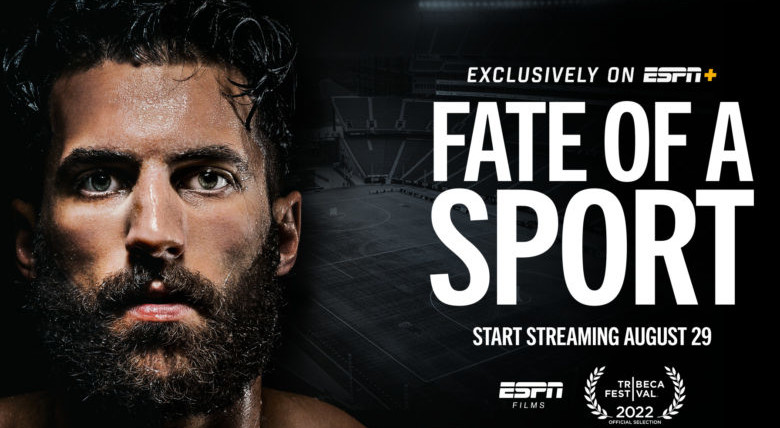 Premier Lacrosse League documentary Fate of a Sport is available to stream now on ESPN+, and it will also air on ABC Sunday at 1 p.m. Eastern, leading into the PLL championship game. The documentary covers the story of how lacrosse legend Paul Rabil decided to team with his brother Mike to launch the PLL in 2018, and all the ups and downs they’ve been through since. Director Michael Doneger spoke to AA on the film, and he said he initially got involved in this thanks to his history with Paul Rabil.

“Paul and I had a past at college; we hung out together, we were roommates, and we remained close friends after college. It was just sort of a natural progression. They’d moved out the PLL operations, they’d started PLL operations in Los Angeles in 2018, and it just so happened that I was looking for my next project, and I pitched Paul and Mike on just a behind-the-scenes making of film on the PLL.”

Doneger said he thought the Rabils were interesting well beyond his connections to them, though.

“Just knowing Paul and Mike so well, I just kind of had a feeling that if they didn’t succeed, they were going to die trying. From just a story standpoint, I found them to be compelling subjects.”

He said the duality of Paul Rabil’s initial role as a player (he only retired as a player last September) and quasi-commissioner of the league was particularly interesting to him.

“Paul was starting the Professional Lacrosse League and also just so happened to be the face of that sport as a player. Those dual roles really was the thing that was most pronounced when I just thought about
the story as a whole, to see him having to be in the boardroom and the c-suite and making decisions on the executive level, and then also having to be a teammate, and how he was going to balance all of that. He’s the quasi-commissioner, and he’s also in the middle of these huddles and and playing with all these guys. That was the most intriguing factor for me to want to get involved in the story.”

Lacrosse isn’t among the North American sports with the largest TV audiences at the moment, so Doneger said a key part of what was needed to make a film on this work was making it appealing to both existing lacrosse fans and those not already familiar with the sport. He said the PLL also has tried to reach beyond existing lacrosse fans, so it was a good fit for this story.

“That’s kind of the challenge of building the PLL that Paul and Mike  have faced, ‘How do we bring in the non-lacrosse fan?’ That’s really how they’re going to grow the sport. That’s always been part of their mission within the PLL.”

But Doneger said he thinks the crucial element of any sports film isn’t actually the sport in question, but the people involved.

“For me, from a filmmaker’s perspective, it’s less about what the vehicle is and it’s more about the subjects driving the vehicle. And again, Paul and Mike are fascinating characters. And I just thought that audiences would find them magnetic and connect with them and see brothers working together and clawing for their lives to see this thing through and make it a success. The stakes were so high. Lacrosse is a small percentage of the sort of broader sports community, but I just found Paul and Mike to be engaging characters that people would be able to connect with.”

And he said the Rabils’ brotherly connection and underdog status makes them relatable beyond lacrosse, too.

Doneger said the project grew significantly over the years, too, starting as a small independently-financed film and then leading into notable collaborations with Uninterrupted and prominent producers, and eventually this distribution deal with ESPN.

“We started this film as just sort of like a small independent-financed film. Our resources were limited in a financial sense. But we were blessed with a lot of impassioned talent behind the scenes. When we started building this thing, we didn’t have distribution in place, we didn’t have big financing or anything like that. We started officially filming this in 2018, and by January 2020 we had a cut, like a 90-minute cut, and we started showing that around.”

“And that’s when we brought on Uninterrupted, which is LeBron James’ company, and that sort of gave us some good ammunition of ‘Oh, wait, maybe maybe there’s something to the story.’ And we brought on a great producer, Matt [Tolmach], who is a big lacrosse fan himself and a masterful producer and storyteller.  So once we had that, we sort of had the confidence that ‘Okay, maybe we actually do have something here, we’re generating this interest. And then we submitted to Tribeca, we got into Tribeca, and ESPN and a couple of other suitors were interested, and we ended up just going with ESPN. And it makes sense considering that they have struck a deal with the PLL for games, so there were synergies there.”

Doneger thinks the PLL in general is also helping to boost the profile of lacrosse.

“I think what Paul and Mike have done in the last three years within the sport has really generated the most interest that the lacrosse community has ever seen at the professional level. I don’t think there’s any doubt about that. They have inspired major institutional investors, and they’ve made them believers, as proven by the financial backing. So finally the sport is getting the proper resources
filtered into it.”

And he’s optimistic this film can fit into that.

“With the TV deal with ESPN, and the behind-the-scenes film series like Fate of a Sport which really invites an audience that doesn’t know a whole lot about the sport to learn about these these players, I think that’s the sort of stuff that that will help the league grow. And Paul is a masterful marketer, and he understands that the game is going to grow through fan engagement, and that is done by making the players stars themselves. And Paul is on a mission to make sure that that happens. And so I think that the sport has the brightest future that it’s ever had.”

He said part of that is showing that lacrosse is more than the stereotypes, too.

“Paul and Mike have made it a mission to try and change the narrative of the lacrosse player. Lacrosse in the broader public has such a negative connotation to it. It’s perceived to be a rich white prep school sport. While certainly that there are a faction of those types of people, there are also different types of people that play it as well. And Paul and Mike are really trying to shine a light and magnify those other stories and show that lacrosse is a lot more holistic than what you’ve been prepped for.”

Fate of a Sport will air on ABC at 1 p.m. ET Sunday, leading into the PLL championship game at 3 p.m. Eastern. It’s also available to stream now on ESPN+. More on it can be found on ESPN’s site here.