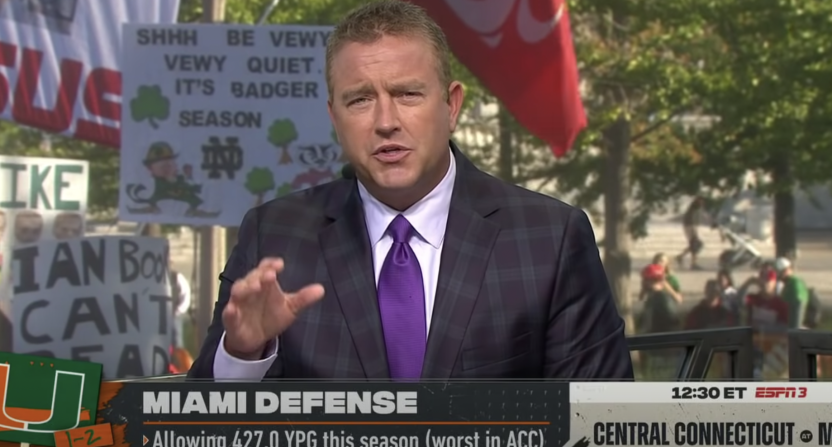 Let it never be said that Kirk Herbstreit doesn’t hold sway over the whims of the college football world.

The longtime College GameDay host has often been seen as a leading voice on the issues surrounding the sport, whether he’s discussing conference realignment, social justice changes, or the return of a college football video game.

He’s certainly not without his faults, recently mocking viewers who thought a school like Cincinnati could never make the College Football Playoff even though he’s been a leading voice against G5 schools making it over P5 schools. Or the time he saw schools being cautious during the COVID-19 pandemic as a sign of weakness, for which he apologized. He got in a Twitter fight with a recruit once, referring to five-star players as “a dime a dozen.” And he’s chided college football programs who complain about the bounties that ESPN has bestowed upon them.

Whether you agree or disagree with any particular thing he’s said, it goes without saying that his words matter to the college football world. And that apparently was never as clear as when a segment College GameDay did in September about the state of the Miami Hurricanes football program led to the school firing head coach Manny Diaz and throwing obscene amounts of money at Mario Cristobal to become their new head coach.

“To me, you look at the powerhouse programs…the president, AD, head coach. Same vision. They’re aligned in their vision for what needs to happen,” said Herbstreit. “Recruiting. Budget. Staff. Whatever it means. That’s what it takes. Miami doesn’t have that. So I don’t think it matters who the head coach is. Until you get a president and an AD and a coach together on the same page, I guess football doesn’t matter. It matters to the alums, to the brotherhood of The U. But I don’t know if it matters to the people making decisions at Miami. And if they don’t change that, it doesn’t matter who the head coach is.”

Following the segment, which featured multiple people talking about the state of the program, Miami officials were “embarrassed” according to Andrea Adelson.

“That got the attention not only of university president Julio Frenk, but an entire fan base already in a lather over another poor start to the season,” wrote Adelson. “Unlike previous years, when the athletic department was told it had to sustain itself financially, the university had money it was willing to spend to address the situation.”

And spend they did, not only paying Cristobal millions but also paying for both his and Manny Diaz’s buyouts in order to make the move. The ends, Miami assumes, will justify the means. Especially so that they don’t have to get a tongue-lashing on national television from Herbstreit and his fellow hosts.

Now, instead of getting upset about his comments, it appears Miami’s new coach is courting Herbstreit as a patron for the new and improved football program.

Cristobal credits Kirk Herbstreit for getting Miami's administration to spend money on athletics.

Mario Cristobal says he reached out to Kirk Herbstreit and joked, “we ought to get you on the air more often to take jabs at resources.” Says he will have resources for assistants and make sure they can succeed.

It’s been said that there’s something uniquely American about a university using healthcare profits gained during a pandemic to boost their football program. But we get the sense Herbstreit and ESPN would approve. A good Miami football team is good business for the network that owns a ton of CFB game broadcasts, not to mention the ACC Network. Even if you have to be the ones to goose things back into shape yourself, accusations that ESPN seems to find itself dealing with often these days.