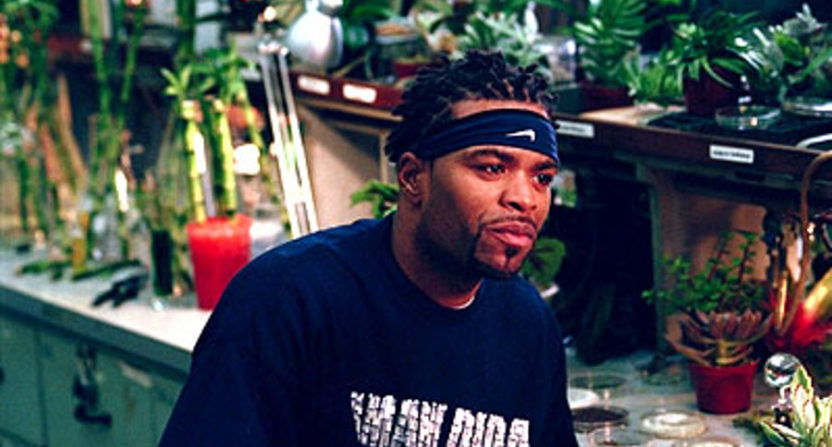 The Dan Le Batard Show with Stugotz has produced plenty of entertaining interviews over the years, and Wednesday’s discussion with Clifford “Method Man” Smith certainly qualifies there. The famed rapper and actor (seen above in 2001’s How High) is the show’s current Celebrity Prognosticator for the week’s NFL action, and keeps getting invited back because he keeps beating Fox’s Colin Cowherd.

But his interview Wednesday took some different turns, from him talking about hitting a blunt to his discussion of playing lacrosse as a kid, which eventually led to the realization that he and cohost Jon “Stugotz” Weiner competed against each other in high school lacrosse on Long Island.

The whole Hour 3 file can be found in the show’s PodCenter: here’s the part where they talk to Smith. They start talking about lacrosse around 2:15, Method Man lets out a “weed cough” around 2:55, and then says “No, I’m actually hitting from the blunt” around 3:05, before they really get into the lacrosse conversation:

Stugotz then details his own lacrosse resume, said he’d heard Method Man was an amazing lacrosse player, and asks how he got into the sport, and Method Man responds “Well, my cousin started me off when I was like 11 years old and I just took to it. There’s something with those sticks and hitting people with them; when you’re a young fresh baby kid, you put a stick in our hands and tell us to get it, we’re going to go get it.”

They then talk about how the rules used to be looser, and Method Man then says “Slashing was real lenient. You could probably hit someone on the top of the head with the stick. Well, not on the head, but you could hit them on the top of shoulder pads without too much trouble, depending on where you were playing at. When we played Port Washington, those dudes were soft. I hope you’re not from Port Washington,” and Stugotz goes “That’s where I’m from, man! That’s where I’m from, Meth! Meth, we lost the state semifinals my senior year!”

Method Man responds “Port Washington was soft as baby snot. And in football, you had the green and white uniforms, soft!” Stugotz responds “Yeah, in football we were terrible,” and Method Man keeps going with “Y’all couldn’t handle me on midfield or attack!”

Le Batard then asks if they played against each other, and it turns out both are 46, so they may well have gone up against each other on the field. Stugotz mentions that a couple of his team’s players went to Princeton and did well there, Le Batard asks what was soft about them, and Method Man says “You know, when you hit them, they went ‘Waah,’ they can’t take a hit.” Stugotz says “I did do that.” Method Man says “Those Port Washington kids, they’re too privileged. Those Port Washington kids, they lived a privileged life, they didn’t have to take hard hits, in life or in the game.”

Stugotz then talks about getting knocked out during a college lacrosse game and having his mom fly off the bleachers to check on him, and Method Man says “Don’t hate on your mom, she’s an O.G., for real.”

The conversation goes on from there, and the whole thing’s a lot of fun. They eventually get into the NFL picks, then say goodbye, but the “Good work today, that was a fun show, it was also intergalacticly stupid” clip they pick to close with is perfect. As is the discussion of Method Man and Stugotz playing lacrosse against each other.

For those not listening to @ESPNRadio, Method Man just hit a blunt and realized that he played lacrosse against @Stugotz790 in high school on Long Island

And The Dan Le Batard Show with Stugotz is fast becoming the go-to source for pot conversations, as we previously saw with their interview of Joe Buck. (Method Man seems like a perfect interviewee for that kind of conversation, too, considering the existence of How High.) Top that, Golic and Wingo!