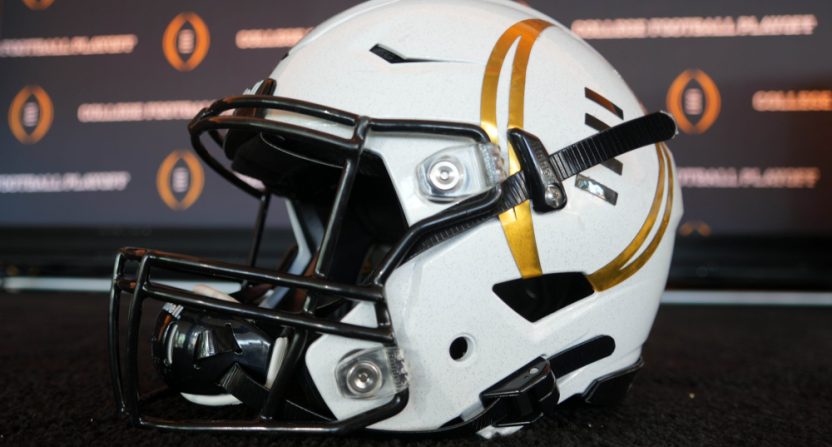 ESPN announced MegaCast plans for the 2022 College Football Playoff on Friday, and many of your favorite alternate broadcasts from recent years will return.

The big headline is the addition of the Field Pass with The Pat McAfee Show, airing on ESPN2 during both semifinal matchups. The Field Pass broadcast was a thing prior to the pandemic, but has been on hiatus in recent years. It returns with a vengeance this season, featuring McAfee in Atlanta joined by several guests from both games.

Here’s more about that from ESPN’s release.

For the first time since 2019, the MegaCast fan favorite Field Pass returns on ESPN2. Field Pass with The Pat McAfee Show will offer entertaining, free-flowing commentary of the CFP Semifinals, anchored by Pat McAfee, who will roam the sidelines of Mercedes-Benz Stadium for both semifinal games. McAfee will call the action from the unique vantage point while simultaneously being joined by a rotation of ESPN analysts, notable personalities, and celebrities throughout the game. From the Vrbo Fiesta Bowl, Robert Griffin III, Taylor Lewan and AQ Shipley are set to join McAfee, AJ Hawk and Darius Butler, who will be live from Atlanta. In primetime, the trio will welcome “Stanford Steve” Coughlin among other guests during the second semifinal showdown.

Additionally, ESPN brings back the Hometown Radio feed for all four Playoff teams. All will be available on the ESPN App, with Georgia’s radio broadcast also airing on SEC Network.

The ESPN app will also have the All-22 (higher camera angle) feed available for both semifinal games, with the halftime marching band performances available on the app as well.

ESPN is also rolling out the following cameras.

AllCam: Captures the entire field at all times

First and Ten: Cameras at multiple angles of the first down line

Alright, so that’s clearly a lot of ways to watch. Here’s a brief summary by network.

The most significant broadcast missing from the MegaCast is the Coaches Film Room, though ESPN has reserved that for the National Championship only in recent years. I imagine that we’ll hear more about that once the semifinals are done and dusted.