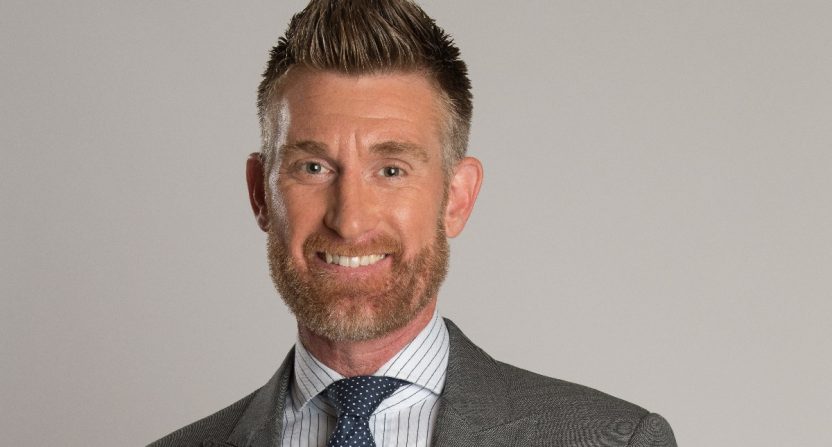 Marty Smith has been a versatile player for ESPN since joining the network in 2006 ahead of the 2007 NASCAR season.

Though he started out working exclusively as a NASCAR reporter, Smith has since proven central to ESPN’s college football and golf coverage as well.

With ESPN set to handle some of the action at next week’s PGA Championship, Smith is once again expected to be a part of the coverage team, and he’ll do so with a new multiyear extension in place, too.

Smith will continue his jack-of-all-trades role beginning at next week's PGA Championship, where he will handle SportsCenter coverage and post-round interview duties at Kiawah. pic.twitter.com/G1sWLQyOEw

That’s according to GOLF.com’s James Colgan, who broke the news as part of a Smith profile out today.

The new contract, which begins at next week’s PGA Championship, only figures to amplify his voice at the Worldwide Leader — not that it needs amplifying. A close look at Smith’s work schedule over the last two months reveals all one needs to know about his role at the network:

– Los Angeles for the fallout of Tiger Woods’ car accident
– Nashville for the SEC basketball Tournament
– Myrtle Beach, S.C., for Masters preview coverage with Dustin Johnson
– Augusta, Ga., for the Masters
– Clemson, S.C., to report on future Jacksonville Jaguars quarterback Trevor Lawrence, then to Seneca, S.C. for the NFL Draft
– Louisville, Ky., for the Kentucky Derby
– Kiawah Island, S.C., for the PGA Championship

Colgan makes a strong point about Smith’s versatility, and Smith has certainly come a long way from the TV novice who did SportsCenter hits exclusively on NASCAR.

“I had never done TV, and I get a call from ESPN that says, ‘Hey, we are putting together our NASCAR team for 2007 and beyond, we are going to re-enter the sport as a broadcast partner, and everyone we speak with says your name,’” he said. “I said, ‘First of all, that’s awesome. Thank you. But I think you got the wrong Marty — Marty Snyder, who is a brilliant broadcaster and a fantastic person, and a great friend of mine, I have his number. I can give it to you.’ And [ESPN vice president of production] Jack Obringer started laughing. He goes, ‘No dude, they keep they saying you.”

In the beginning, Marty was a NASCAR insider earning only two minutes of airtime per week. Still, television came slowly, even for a self-professedly long-winded sportswriter.

Smith also discussed how his mentality has changed after more than a decade on the air:

“I was not self-confident as a writer and certainly not on television for a very long time. So much of what drove me was insecurity, not passion. It was insecurity,” he said. “Then, as I gained a little more self-confidence, I realized that my calling card was passion. I realized that it’s okay to be unbridled in your appreciation for all of this. It’s okay to be grateful, and to openly express the gratitude of how damn awesome it is to be at the Masters.”

In 2019, Smith went viral for his show of support for a local reporter after LSU-Alabama, one of the more awesome and genuine moments of the last few years in the world of sports media.

As I recorded my standup for my LSU-Alabama wrap, @MartySmithESPN gave some advice & encouragement. I'm a big fan of his dating back to his NASCAR days, but this was next level. To quote him, "Be kind. Work hard. The rest takes care of itself." Words to live by. Thank you man. ? pic.twitter.com/niiE3rJtDW

Moments like that help reinforce the sincerity when Smith addresses his own talents:

“I’m not the best reporter. I’m in a world with people like Tom Rinaldi, man, those are just the facts,” he said with a laugh. “I will never be outworked. I will never be out-passioned, and I’m going to be kind, because I control those things. Kindness, effort, passion. I control them, and they resonate, they just do.”

Smith is a great interviewer, a great storyteller, and able to move comfortably from the infield at Talladega to the range at Augusta, and ESPN certainly appreciates him. Smith joins Chris Berman as longtime ESPN presences to get new deals this week.