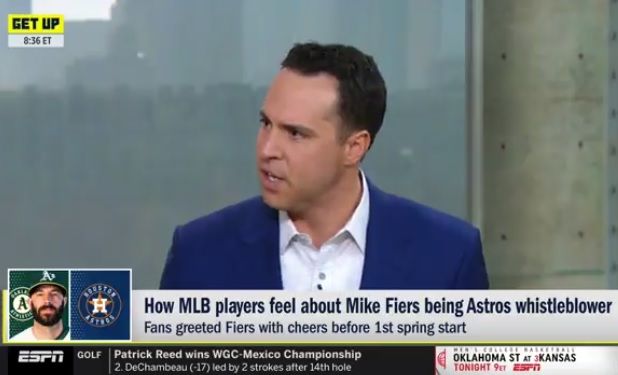 Whether or not Mike Fiers is a “snitch” for outing the Houston Astros’ sign-stealing scheme has become a recurring hot topic on ESPN’s morning show, Get Up.

On Friday, analysts Desmond Howard, Marcus Spears, and Tim Legler each jumped on the “Fiers is a snitch” pile, criticizing the pitcher (now with the Oakland Athletics) for not speaking out at the time while he was playing for the Astros during the 2017 season. Howard took that sentiment further, saying that adding Fiers to a team would cause a problem in the locker room because he revealed the sign-stealing to reporters.

A month earlier, baseball analyst Jessica Mendoza appeared on several ESPN morning shows to say Fiers “ratted everyone out” by going public with the Astros’ sign-stealing tactics, betraying a clubhouse code. At the time, Mendoza was a special advisor to the New York Mets, creating the question of a conflict of interest because Carlos Beltran was set to begin his first spring training as the team’s new manager. Beltran was one of the figures named in MLB’s report as a key figure in relaying signs from cameras to Astros hitters while they were batting.

(Mendoza has since been removed as a Sunday Night Baseball analyst, moving to an “expanded role” in which she’ll work mid-week games on ESPN and postseason broadcasts on ESPN Radio, while also covering the Women’s College World Series and baseball and softball at the Tokyo Summer Olympics.)

But criticizing Fiers for breaking clubhouse Omertà apparently isn’t the house take on Get Up. Providing the counter-argument on Monday morning’s show was analyst Mark Teixeira, expressing his opinion alone and not as part of a panel. The former New York Yankees first baseman notably pushed back on the notion that Fiers should be viewed as a rat, calling him a “hero.”

Mark Teixeira raising the point that two of Mike Fiers' most vocal critics are former Red Sox players, and Boston is still under investigation for its own sign-stealing scheme pic.twitter.com/6J3bpqDeiF

First, he raised the issue that two of Fiers’ most vocal critics, Pedro Martinez and David Ortiz, are former Boston Red Sox players. The Red Sox are currently being investigated for their own sign-stealing scheme during the 2018 season.

“Anybody that wasn’t on the Astros, they want these guys outed, they want the Astros punished,” Teixeira said to host Mike Greenberg. “So for David Ortiz or Pedro Martinez — interesting that it’s two Boston players and Boston is actually part of this investigation as well — I think there’s some meaning behind what the two Red Sox players are saying.”

Teixeira then took exception to using the term “snitch,” implying it’s an outdated phrase and way of thinking used by people who maybe watch too many mob movies.

Mark Teixeira clapping back on the "Mike Fiers is a snitch take" this morning on @GetUpESPN ? pic.twitter.com/lMNchBqRZM

“I just think there are very few people out there that even use the words ‘snitch’ and ‘rat’ anymore,” said Teixeira. “This isn’t Goodfellas. This is the real world. In the real world, you want bad things brought to light.”

Greenberg said he tends to agree with Teixeira’s view, which he didn’t appear to do with Spears, Howard, and Legler on Friday.

Should Teixeira’s opinion on this matter be taken more seriously since he’s a former MLB star, four years removed from his playing career? Some might point out that Teixeira may be lobbing rebuttals from inside a glass house, since the Yankees were accused of using a dugout phone to communicate with replay officials on whether or not pitches were balls or strikes. MLB didn’t rule that the Yankees use this to steal signs, however.

But Beltran was with the Yankees (from 2014 through 2016) before rejoining the Astros in 2017, which has led some to believe that the veteran learned his sign-stealing methods there. Teixeira was asked about this by the New York Post‘s Joel Sherman. As you might expect, he denied that the Yankees did anything like the Astros, though he did name Beltran, Alex Rodriguez, and Chris Young as teammates who used the TV broadcast to interpret opponents’ signs.

Unlike the Astros, he insists, the sign-stealing wasn’t used in real time, but was more about decoding patterns in pitch sequencing and later relayed to baserunners after watching the catcher during a telecast.

“By the time they decoded and would get it to me [from second base], my at-bat was over or the pitcher and catcher changed the signs,” Teixeira explained. “They were wrong more than they were right. … Anecdotally, I would argue with teammates, ‘You are not good at this. You are trying to give signs, then you get mad at me because I am not good at it either. We are not that good at it.'”

Teixeira’s response might induce some eye-rolling, especially among those who believe that the Yankees — and plenty of other MLB teams — stole signs in similar fashion over the past few seasons. But criticizing Fiers for being a whistleblower apparently isn’t the company line among ESPN’s morning shows and Teixeira made certain to express his contrary views. Considering how many current major leaguers — including MVPs Mike Trout and Cody Bellinger — have spoken out against the Astros’ sign-stealing and called their 2017 World Series championship into question, maybe Teixeira is expressing a majority, yet less vocal opinion.