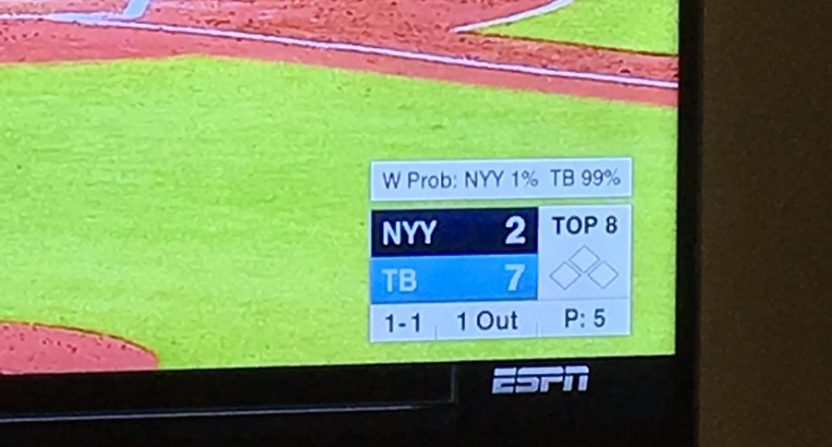 ESPN debuted a new feature during its MLB Opening Day broadcasts Monday, and like every subtle change to every broadcast ever, a lot of fans instinctively disliked it.

The feature in question was a little graphic in the bottom-right corner of the screen explaining each team’s win probability in the current game.

Reviews for showing win probability on screen were pretty unanimously negative, with fans complaining that the concept is un-fun, annoying or misleading.

Hey ESPN, I guess I'm OK with you showing a win probability graphic late in a ballgame. But in the second inning, when it's scoreless? Nah.

Is there anything more annoying than the pitchtrax on @espn?Yeah the win probability percentage they put up! Just Stop! #SundayNightBaseball

Hey @espn, that win probability stat is idiotic. Please stop showing it during baseball games, it literally means nothing. Thanks

@PavlovicNBCS This is why the cute little "win probability" thing ESPN kept showing last night is so meaningless.

Who else is thinking this about the "Win Probability"? pic.twitter.com/LuWaICPGUR

In an unfortunate twist for ESPN’s win probability, the Cubs scored three runs against the Cardinals in the ninth inning Sunday night to flip what had been something like a 97-3 St. Louis edge into a toss-up.

Though the Cardinals ended up winning in the bottom of the inning, for people who don’t fully understand how statistics work the Cubs’ comeback was proof that win probability was worthless.

ESPN has to cut the shit with this win probability %. Cubs were 2% in game 7 and came back to win. That % doesn't matter in baseball

Win probability can be a cool stat to look at after a back-and-forth game or dramatic comeback to show how dramatically the odds swung, but it does feel a little meaningless in real time. What exactly are we gaining from knowing the Astros have a 56 percent chance of winning the game when it’s 3-1 in the fourth? And if the win probability is 98-2 in the late innings, what are you suggesting? That we turn off the game?

For teams, win probability could be be extremely useful, indicating the leverage of a given moment (although, leverage index does that better) and therefore helping managers decide which pitcher to insert or whether to pinch run. For fans, it’s knowledge for the sake of knowledge. At worst, it diminishes the game’s excitement. At best, it doesn’t do much of anything.