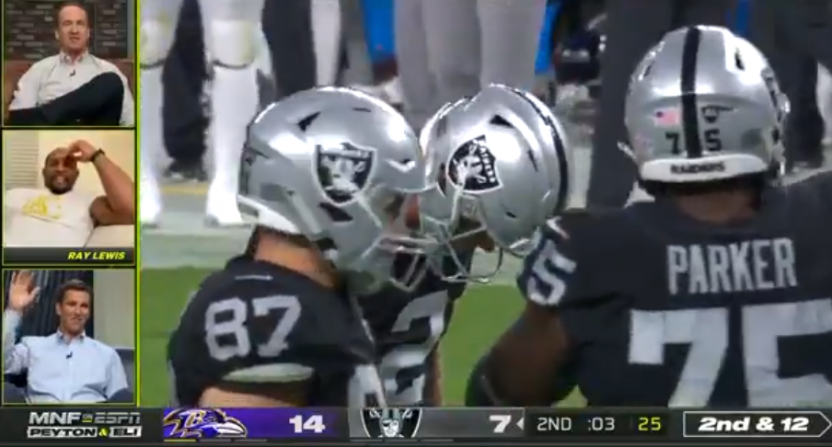 For many of those looking at Twitter during the Ravens-Raiders Monday Night Football broadcast Monday, there was an incredible amount of discussion of the debut of the much–talked–about ESPN2 alternative broadcast featuring Peyton and Eli Manning from their homes (including a fire alarm at Eli’s place). In fact, a Pro Football Talk Twitter poll with more than 11,100 votes found that 57.6 percent of respondents (as of 7 p.m. Eastern Tuesday) were watching the Manning broadcast rather than the primary ESPN broadcast of the game (featuring Steve Levy, Brian Griese, and Louis Riddick):

Which feed are you watching? Primary or Manning cam?

There are obviously some limitations to that poll. For one, the votes are coming from people who either already follow Pro Football Talk or saw this through some means of connection to PFT (presumably, a like or a retweet from someone they follow, or an appearance in a Twitter search or trend). That’s far from the average football audience.

Beyond that,  there weren’t options for “not watching,” “watching in Spanish,” or “watching on a different international feed.” So there may have been people who weren’t engaging with one of the two given feeds that may still have voted for one of the two given options.  And beyond that still, it’s been well-established that the Twitter universe (even if you comprehensively polled everyone who has a Twitter account, which this isn’t doing; this is polling people who happened to be online then and happened to see this tweet) is not the wider universe.

And, to be clear, PFT wasn’t trying to represent this as a scientific sample or as a sample of the whole viewing audience. They were just taking a poll of those who happened to respond. But this poll’s results are still quite interesting when contrasted to the actual viewership numbers. Those numbers show an average audience of 15,292,000 across ABC, ESPN, ESPN2, and ESPN Deportes, with just 800,000 of those viewers for the ManningCast on ESPN2:

Look, none of this makes the ManningCast irrelevant. 800,000 viewers is certainly better than anything else ESPN2 would have aired in that slot, and this got significantly more buzz and viewers than some other Megacast attempts (as discussed in the PFT writeup of this). That includes Rece Davis and Kirk Herbstreit for a Week 2 MNF Saints-Raiders game last year (it’s unclear just how many viewers that drew, but it didn’t make ShowBuzz Daily’s top 150 cable originals for that day, unless it somehow got rolled into the 171,000 for Monday Night Kickoff). And it’s quite possible that the ManningCast approach might build its audience further as more people become aware of it. But, for now, the 800,000 viewers here are just 5.2 percent of the overall audience for this Monday Night Football game, with most of those viewers watching the regular English feed of Levy, Griese and Riddick on ABC and ESPN.

And there’s an argument that this approach is actually helpful for the main Levy/Griese/Riddick booth. Andrew Marchand made that case in a New York Post column Tuesday, writing that “the brothers take the focus off Levy, Griese and Riddick. That may sound like an insult — it’s not — but it might help them maintain their jobs long term.” He may have a point there. For one thing, the ManningCast (at least this week) drew a lot of the highly-engaged Twitter crowd, which is often a critical crowd. For another thing, ESPN’s spending on this alternate feed means there’s presumably less desire to shake up the main feed, an always-expensive proposition. And much of the effort that might normally go into analyzing the MNF broadcast is now being spent on analyzing this alternate broadcast (see Marchand’s other piece Tuesday for an example of that).

But the larger takeaway from the poll versus the actual viewership numbers here is perhaps as a reminder of how small the sports Twitter audience can be compared to the actual audience that’s viewing events. And this is perhaps especially true with the NFL, which tends to draw the largest overall (U.S.) viewership numbers of any sports league. Much of that audience may not be on Twitter at all, or at least may not be actively and frequently engaging with it during a game, and some of that audience may be completely unaware of the existence of an alternate broadcast. (It’s worth noting that many people do not follow sports broadcasting plans; an example came from the Turner NCAA basketball TeamStream megacasts, which got a lot of viewers, but saw many people confused by the idea accidentally watching a homer feed and complaining about it.)

That isn’t necessarily a call to not do alternate broadcasts. There can be great power to some of these, whether it’s a Nickelodeon kid-focused NFL broadcast (returning this year) or a specific CFP Megacast idea (perhaps especially the coaches’ film room). When done well, they get a lot of discussion and engagement (and likely a higher percentage of positive engagement than you’d find for a standard broadcast; people watching alternate feeds are seeking them out based on the idea, and if they wind up not liking them, they can always go to another alternate feed or return to the standard broadcast). And they may even get some people who weren’t planning to watch the game normally to tune in. But it’s worth keeping in mind how small the alternate broadcast audience tends to be compared to the regular audience, even if it gets far more Twitter discussion. And that percentage is also worth keeping in mind when it comes to evaluating how representative any amount of Twitter comments on a broadcast are compared to the overall audience for that broadcast.