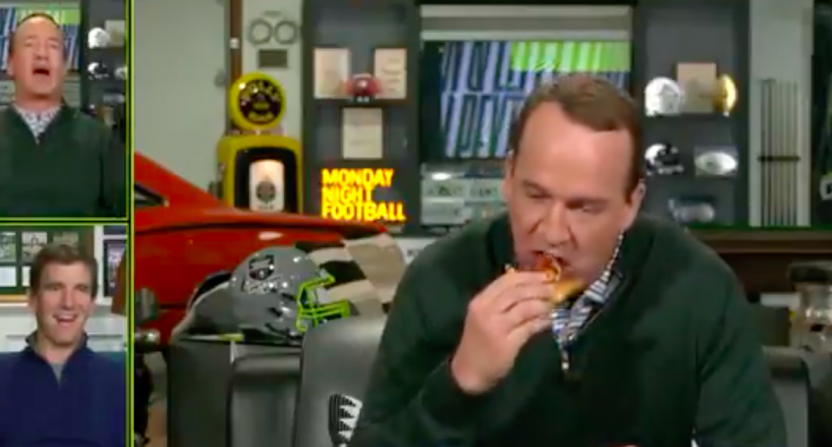 In sports, there are various curses that try to explain certain unusual things happening. Throughout history there have been things like the Madden Curse and the SI Curse where bad things happen to those who embrace the cover of the Madden video game or Sports Illustrated magazine.

Now, there is a trendy new curse picking up steam and it revolves around the hottest show in pro football. The ManningCast during Monday Night Football has a wide variety of guests from football players to athletes in other sports to celebrities. Focusing on the football player front, those players who participated on the ManningCast lost the following week.

The Manning Curse is real.

Every time a player comes on the ManningCast, that player loses the next game.

These are some great teams tasting defeat with seemingly regularity. The Chiefs were supposedly good when Travis Kelce showed up during Week 1 and lost to the Ravens in Week 2. Now, KC can barely beat the Giants. Russell Wilson’s injury is the biggest reason why the Seahawks are 3-5 but the Seahawks were billed as a great team before that when they lost to the Titans at home in Week 2.

The Buccaneers are the favorite to win a second consecutive Super Bowl but they weren’t immune to the curse when Rob Gronkowski showed up during Week 2. The Bucs lost to the Rams the next week and Gronk went down injured that game. Matthew Stafford appeared during Week 3 and then the Rams got their only loss so far this season against the Cardinals.

And if you thought Eli and Peyton taking a few weeks off would cool off the curse, Tom Brady showed up last week and the Buccaneers lost to the Saints. For the Bucs and the Rams, their only losses this season has come the week after their players appeared on the ManningCast.

One thing that should be noted is every player who appeared on the ManningCast faced, and lost against, a really great team. The Chiefs played the Ravens (who are now 5-2), the Seahawks played the Titans (now 6-2), the Buccaneers played the Rams (now 7-1), the Rams played the Cardinals (now 7-1), and the Bucs played the Saints (now 5-2) even without Jameis Winston for most of the game. While this has happened five times, is this actually a curse or a mere coincidence that Peyton and Eli’s producer is booking players who have big games coming up?

We’re going to figure out if this curse is for real as it enters its biggest test this week. Josh Allen appeared during the third quarter and the 5-2 Bills play the 1-6 Jaguars on Sunday. The Jaguars haven’t won in the United States in nearly 14 months and the Bills are two touchdown favorites. While it’s not impossible for the Jags to win, they’re probably going to need something supernatural. Like a curse.